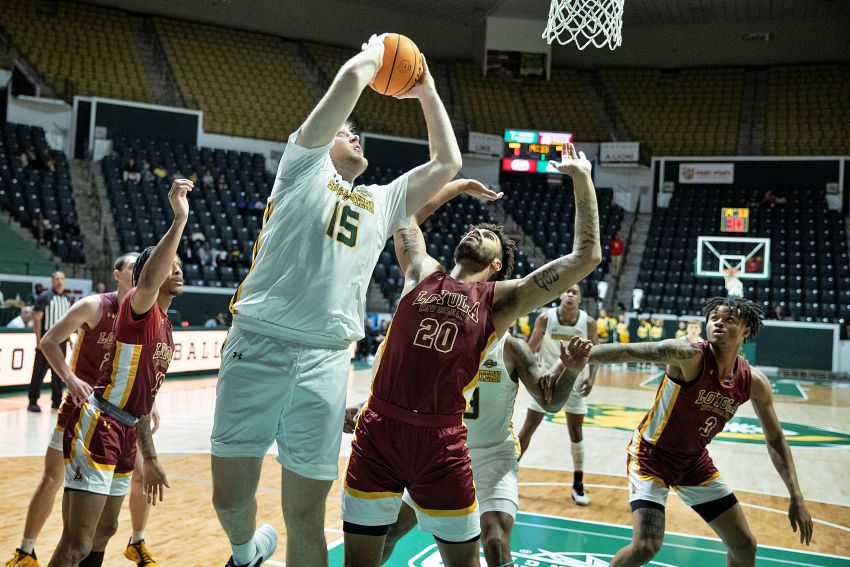 The defending NAIA Champions, already with two games under their belts this season, started out fast as the Lions tried to find their rhythm which led to a fast start for Loyola with the Wolf Pack jumping out to a 20-10 lead with 11 minutes left in the first half.

But Donte Houston lay-up started a 20-0 run for Southeastern to turn that ten-point deficit into a ten-point lead as Sami Pissis beat the Wolf Pack down the court following a missed Loyola shot for a lay-up that made the score 30-20 SLU with less than six minutes left before halftime.

Loyola rallied to tie the score twice in the closing minutes of the first half, but Roger McFarlane hit a three-pointer with just seconds left to give the Lions a 40-37 lead at the break.

The Wolf Pack retook the lead at 49-47 with just over 17 minutes left in the game, but Matthew Strange immediately answered the three that game Loyola the lead with one of his own to give SLU the lead for good.

That three by Strange sent Southeastern on a game-clinching 24-8 run that Strange completed with a lay-up which put the Lions up 71-57 with just over 9:30 left on the clock. The lead slowly built to its peak at 23 points on a Roger McFarlane fastbreak dunk with just over 1:15 left which gave the Lions a 90-67 lead before Loyola closed out the game with the final five points.

Brody Rowbury was a force inside for the Lions as the true freshman went seven-of-eight from the field and led five SLU players in double-digits with 16 points to go with five rebounds. Roger McFarlane was five-of-nine from the field, including a three-pointer, and filled up the stat sheet with 13 points and led the team in both rebounds, with eight, and assists, with six. Matthew Strange was four-of-five from the field, two-for-three from deep, for 11 points. Alec Woodard was perfect from the field, hitting all four of the shots he took, including two shots from deep, and grabbed a team high-tying eight rebounds. Boogie Anderson, also making his SLU debut, also finished with ten points on five-of-nine shooting.

The Lions (1-0) head out for the first of five-straight games away from the University Center, heading to the Rockies for a date with Colorado State in Fort Collins. Tip-off of Friday’s game against the Rams (1-0) is set for 7:30 P.M. central time at Moby Arena.

TICKETS
For ticket information, please contact the Southeastern Athletics Ticket Office at (985) 549-5466 or visit www.LionSports.net/tickets. Southeastern is implementing mobile ticketing as the primary source for securing tickets. All tickets will be available via e-mail in a PDF format for fans to download on their phone or print at home. Tickets can also be downloaded to Apple Wallet.