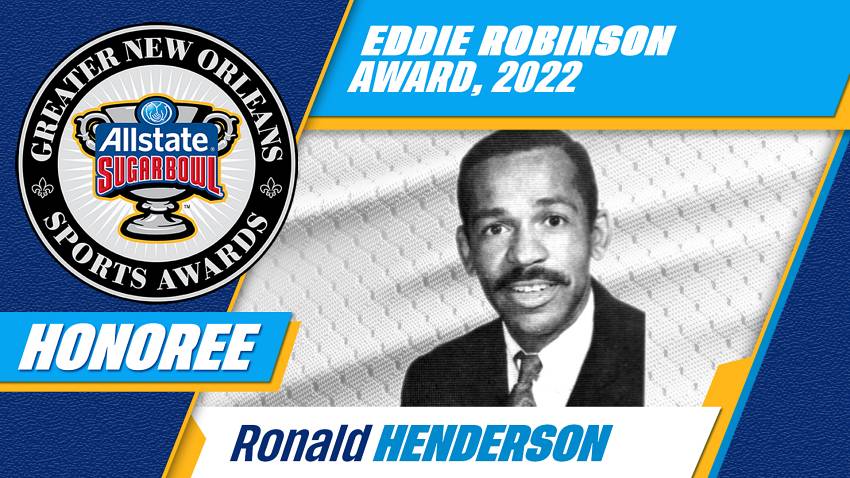 Legendary New Orleans Coach To Be Recognized for Selfless Efforts

Overall, 27 individuals and four teams will be honored at the 2021-22 Greater New Orleans Sports Hall of Fame Awards Banquet on July 30. Honorees are currently being announced over a month-long period, wrapping up with the Corbett Awards for the top male and female amateur athletes in the state on July 25 and 26.

Since being established in 2009, the Greater New Orleans Sports Awards Committee’s Eddie Robinson Award has become a prestigious honor in the region. Many awards recognize championships, victories and record-breaking performances, but the Eddie Robinson Award is presented annually to an individual in the state of Louisiana who has demonstrated the qualities most closely associated with Coach Robinson: outstanding achievement in athletics, academics, sportsmanship, and citizenship by maximizing the use of limited resources. And more importantly, it carries the name of a Louisiana legend who coached the Grambling football team for 57 years. While he was known for his 408 career victories, he was more known for the characteristics now recognized by this Allstate Sugar Bowl sponsored honor.

This year’s winner of the Robinson Award, Ronald “Hendu” Henderson was an elite track athlete in the city of Chicago in the late 1950s. Following his high school graduation, he held offers from 17 universities to run the 880 at the collegiate level.

Henderson achieved tremendous success even though he didn’t have any formal training – he didn’t even have a coach. Running in his older brother’s hand-me-down shoes and an old basketball jersey, he won the city championship in the 880 in record time, but was disqualified for breaking too early for the pole and in the state championships.

After a short stint at Western Michigan, Henderson landed at Dillard University due to his love of the tight-community and the neighborhood-feel of the campus. From 1960-63 he was the Gulf Coast Athletic Conference Champion at 100 yards, 220 yards, 440 yards and 880 yards.

After his graduation, he jumped into coaching, but not with the goal of winning championships, but to develop competitive athletes.

“I went through so much as a kid, I wanted to make sure no kid went through what I went through,” Henderson said. “When I won races, the kids that came in second and third got all the cheers. Nobody cheered for me. I was completely on my own. I didn’t want anyone have to go without coaching. I read a lot of books. I made friends with college coaches and I learned a lot for them. I wanted to be able to teach my athletes everything they needed to do – all of the events, hurdles, high jump, mile, half mile, sprints.”

His primary position was a coach at L.B. Landry High School but he was instrumental in developing and promoting athletes from all schools in New Orleans.

Athletes like Dr. Thomas Hill, a Cohen High grad, a 1972 Olympian and a member of the Allstate Sugar Bowl Greater New Orleans Sports Hall of Fame.

“He was directly responsible for me getting a college scholarship,” Hill said. “It was ‘Hendu’ who actually talked the coach at Arkansas State into giving me an opportunity. And I am one of many during that time in the area who could say that.”

The Olympic bronze medal winning high hurdler added, “When he was director of the Dryades Street YMCA, he ran a summer track program for young people across New Orleans that afforded opportunities year-round. Not to mention experiences travelling out of town to compete, a first for many of us.”

Henderson worked with others in the track community to pressure Southern AAU to allow black athletes to participate in its events, allowing them the opportunity to compete at the regional and national level. And it was Coach Henderson who petitioned the New Orleans Recreation Department to open the NORD Meet of Champions to champions competing in the all-black Louisiana Interscholastic Athletic and Literary Organization (LIALO) in 1969.

Many awards recognize championships, victories and record-breaking performances, but Coach Henderson was never about those types of successes making him an ideal recipient of the Allstate Sugar Bowl’s Eddie Robinson Award. The honor is presented annually to an individual in the state of Louisiana who has demonstrated the qualities most closely associated with the legendary Coach Robinson: outstanding achievement in athletics, academics, sportsmanship, and citizenship by maximizing the use of limited resources.