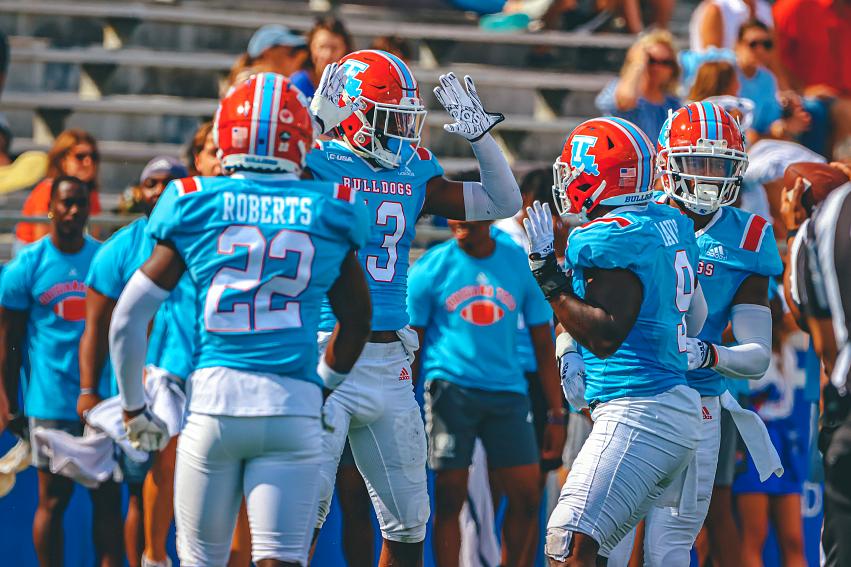 With both Bulldog quarterbacks – Parker McNeil and Matthew Downing – having suffered injuries in game, Landry Lyddy came in with 37 seconds left and threw a dime to Cyrus Allen who made the acrobatic catch, getting a foot down for the score. An even better catch was made on the two-point conversion by Tre Harris who brought in the one-handed grab to tie it up 35-all and send it to overtime.

It only took the Owls three plays to drive 25 yards for a touchdown in the first OT period to make it 42-35. With the ‘Dogs facing a 4th-and-3, Lyddy found T. Harris in the corner for his third TD reception. The two tried to hookup again, going for the win on another two-point conversion, but the ball was overthrown.

McNeil and the Bulldogs were rolling early on, jumping out to a 10-0 lead thanks to an 8-yard strike to T. Harris and a 48-yard field goal by Buck Buchanan. McNeil suffered an injury on his next offensive play, taking a big hit on a 3-yard scramble, making way for Downing to come in.

After the Owls had three turnovers on their first five offensive possessions – one turnover on downs and two lost fumbles – they finally found the end zone with just 2:06 remaining in the first half.

The score would remain 10-7 in favor of the Bulldogs heading into halftime. In the second half, the scoring ramped up for both teams. Rice scored two touchdowns in the third quarter while LA Tech put up 17 in the stanza to cling to a 27-21 lead.

That was until the Owls took the lead when quarterback TJ McMahon broke off a 64-yard touchdown run. Sticking to the ground game, they extended their lead with a 17-yard rush by Luke McCaffrey who also racked up 171 receiving yards.

LA Tech’s three quarterbacks combined for 229 passing yards and five touchdowns, each with at least one. T. Harris tallied a team-high eight catches for 92 yards and three scores and Marquis Crosby picked up 87 yards on the ground.

“We came up short, did not make enough plays at the end. The first half, we did not do enough on the offensive side of the ball to take advantage of short field position. You are disappointed not to win at home on homecoming. Our guys fought on defense despite our injuries. There is a lot of growing and learning we still have to do as a team. For seven football games, our guys have fought and played hard. They play with a toughness. We just have to be smart and execute better.”

“We all understand it is going to be a next-guy up. We had a lot of injuries this week so we had to have a lot of guys step up. Everybody had to try to step it up a notch. It all comes down to execution. It came down to little things. We had some drops, penalties, just little things that we need to do better with. It costed us at the end of the day.”

“Rice had some big runs and found their groove. We have to find a way to put together a full game. I am still encouraged by things we did defensively. We will just keep working. We were able to take the ball away, something that is part of our identity. I have complete faith in our personnel and our coaching staff.”

NOTABLES
• LA Tech falls to 2-5 on the season and 1-2 in C-USA play.
• LA Tech played its first overtime game since Oct. 31, 2020.
• The Bulldogs now lead the all-time series with the Owls, 9-6.
• The Bulldogs had three different quarterbacks throw for a touchdown – Parker McNeil, Matthew Downing and Landry Lyddy.
• Tre Harris had a team-high eight receptions for 92 yards and three touchdowns.He became the first Bulldog since Carlos Henderson in 2016 to register at least three receiving touchdowns in a single game.
• Smoke Harris extended his streak of games with at least one reception to 27 (totaled six catches).
• The Bulldog defense recovered three fumbles, a feat that has only been done three times in the last five years.
• Smoke Harris recorded a 65-yard kickoff return, the longest by a Bulldog since Wayne Toussant in 2019.

UP NEXT
LA Tech heads to Miami, Florida on Friday, Oct. 28 to face the FIU Panthers. The matchup is set for 7 p.m. CT and will be nationally televised on CBS Sports Network.