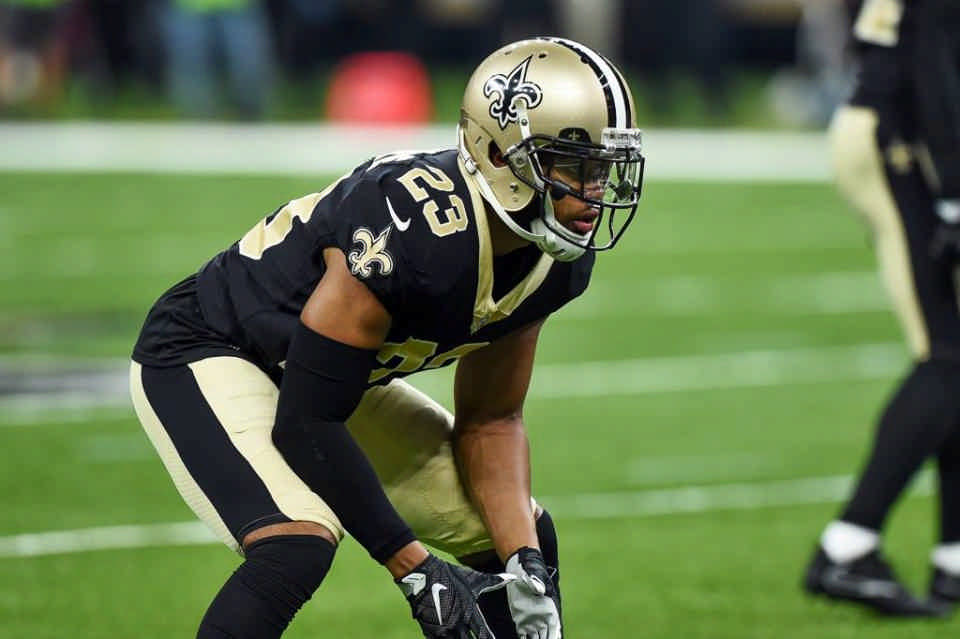 Part of the misery that was a 26-9 loss to the Atlanta Falcons for the Saints came when top cornerback Marshon Lattimore left the game with an injury. With a potent Tampa Bay passing attack on deck next for New Orleans, the challenge of bouncing back in the NFC South this week may have an added degree of difficulty.

#Saints CB Marshon Lattimore suffered a hamstring strain that has him considered week-to-week, source said. That’s a tough loss. His absence was felt quickly Sunday, when #Falcons WR Julio Jones went for a 54-yarder as soon as he exited.

when Lattimore left the Falcons game, slot corner PJ Williams replaced him on the boundary in the secondary while C.J. Gardner Johnson stepped into Williams’ usual role.

You talked last week about the slow starts on offense. Does that become even more magnified after a game where you were never really able to make up for it and get out of that early rut?
“You come away from yesterday’s game and I think our conversation a week ago was relative to the first drive (on offense). Both teams had a (starting offensive) drive and a field goal. I think this was first quarter through fourth quarter. In other words, it’s a low scoring game at halftime. We have been on the field a lot defensively. Offensively, we had trouble staying on the field. So despite maybe not playing our best football, we’re still in a position to win a football game and we weren’t able to. I think that Atlanta deserved to win that game. They were ready to play, the outplayed us, they outcoached us and the tape shows it. It’s that simple.”

Was there any one thing that was more glaring than the other, whether it be penalties or sacks or anything that just kind of seemed to be the biggest contributing factor?
“I didn’t think we played well up front on either side of the ball. I think our third down numbers on either side of the ball, I mean the third down statistic tells you everything and then there’s an additional three third downs that they’re going to convert because of penalties. You factor all those in and one side of the ball’s going to have the high 70 snap count and the other side before we got into our hurry up, we were in the forties.”

After watching the film. What do you think they were doing well to get some of those big runs against you guys?
“They did a good job with their tempo, so they were a little bit more of a hurry up. We did a poor job of setting the edge. There were two or three runs that just went right around our support and whether that was in the secondary, whether that was at linebacker or in the front, there were too many runs that went uncontested, shoot five, 10 yards into our defense. We weren’t real sharp and we got what we deserved.”

How did you feel the team played without Marshon Lattimore when he had to leave the game?
“I didn’t feel a difference, obviously when you lose a good player like that, it’s significant. But I felt like that that was a part of the game, but not something that I noticed that changed differently.”

With Terron Armstead dealing with an illness last week, could that have affected anything up front?
“I don’t think the flu does that. I’d love to be able to blame the way we played up front on someone’s flu, but I can’t do that. There were too many things we didn’t do well.

Can you take a lot like that and use it for a good purpose?
“Look, we’ve got to be able to get something out today relative to the details, the things that we’re wanting to correct. Shame on us if we can’t. That is the reality of Monday. You come in here, it’s not going to taste good going down, but it’s going to go down. And then tomorrow, the focus shifts immediately to Tampa Bay and it will for me as well. But right now, we’ve got to clean up some of these things or else it will just repeat itself at some point.”

It seems like this team has done a good job of handling anything that comes their way and kind of coming out ahead. I guess when you look at them, what makes them have that ability to do that and move forward?
“I think we have got good leadership here. I think these guys understand the process. They understand the importance of the workweek relative to how you win in this league. They’ve been in big moments. They’ve experienced postseason play and they recognize the importance of winning in the regular season. You lean on your leadership and these guys will work on getting it corrected. Coaches as well. We’ve got to be better and then you focus on the next challenge.”

Do you have any things you can tell us about (Andrus) Peat or do you expect to be without him for a little bit?
“No updates.”