Report: Regis Prograis to return to ring April 17 in Maryland 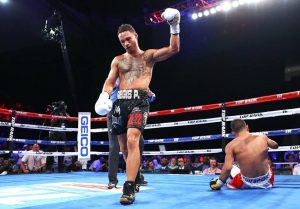 A deal is in place for the much-discussed fight between former junior welterweight titleholders Maurice Hooker and Regis Prograis, who will meet on April 17 (DAZN) at the MGM National Harbor in Oxon Hill, Maryland, multiple sources with knowledge of the… https://t.co/z6YVc1rejv

An announcement for the Prograis-Hooker fight is expected Thursday in Frisco, Texas, Rafael’s report said.

Prograis, 31, lost for the first time in 25 career bouts when Josh Taylor defeated “Rougarou” by majority decision on Oct. 26 at the O2 Arena in Greenwich, England, to take the WBA and IBF super-lightweight titles.

Prior to that, Prograis’ last three fights were held in his home state, including two at Lakefront Arena in New Orleans.

Hooker, 30, held the WBO super-lightweight crown before losing to Jose Carlos Ramirez by TKO last July – his only career loss in 31 fights.