REPLAY: Newman, Manning get rolling in second half of 49-21 victory over Country Day

METAIRIE – Nothing like a little adjustment to get Arch Manning and the Newman offense rolling in the second half.

Manning accounted for four of the Greenies’ five second-half touchdowns and 299 total yards as Newman defeated Country Day 49-21 on a spectacular Friday evening at Wenzel Field.

The game was broadcast live by Crescent City Sports.

Newman (2-0), No. 3 in the latest CCS Class 2A rankings, led 14-7 at halftime as Country Day (0-2) used a big play on special teams and some aggressive defensive schemes to keep it a one-score game.

Manning, who had 68 yards passing in the first half, passed for 176 yards and three touchdowns after halftime. The top-ranked recruit in the Class of 2023 also added a 3-yard scoring run as the Greenies found the end zone on five of their first six possessions in the second half.

Will Zurik had 75 of his 99 rushing yards in the second half and scored Newman’s other three touchdowns.

“We knew we had to push it down the field,” Newman coach Nelson Stewart said of his team’s halftime adjustments. “Even if you miss, you can’t stop trying.

“We wanted to get the ball in Will Zurik’s hands, get 4 yards, 5 yards. It’s ok … to not be greedy. Take the shots when they’re there.”

After a scoreless first quarter, Newman broke on top when Zurik pushed it in from the 2 on the second play of the second quarter.

Country Day responded right away as Evan Nunez returned the ensuing kickoff 94 yards for a touchdown.

Zurik capped a 10-play, 87-yard drive with a 4-yard TD run with 3:06 left before halftime, giving the Greenies their 14-7 halftime cushion.

The 10-play drive by Newman after halftime was all Manning’s arm, passing on every down, including an 8-yard touchdown to Chris Hunter to make it 21-7 with 8:39 left in the third.

A Shalin Gala interception set up Manning’s TD run, and after a fumble, Manning found Saint Villere on the next play for a 15-yard touchdown. The Greenies put up 14 points in 64 seconds to stretch the lead to 35-7 entering the fourth.

Country Day quarterback Michael Talbot left with an injury on the final play of the third quarter. Sinnott Bland, a starter at wide receiver, moved behind center and passed for 153 yards and two touchdowns in the fourth quarter, including an 88-yard catch and run by Jack Schwing.

Manning had a 72-yard touchdown pass to Hunter and Zurik scored his third touchdown on an 8-yard run in the final period. 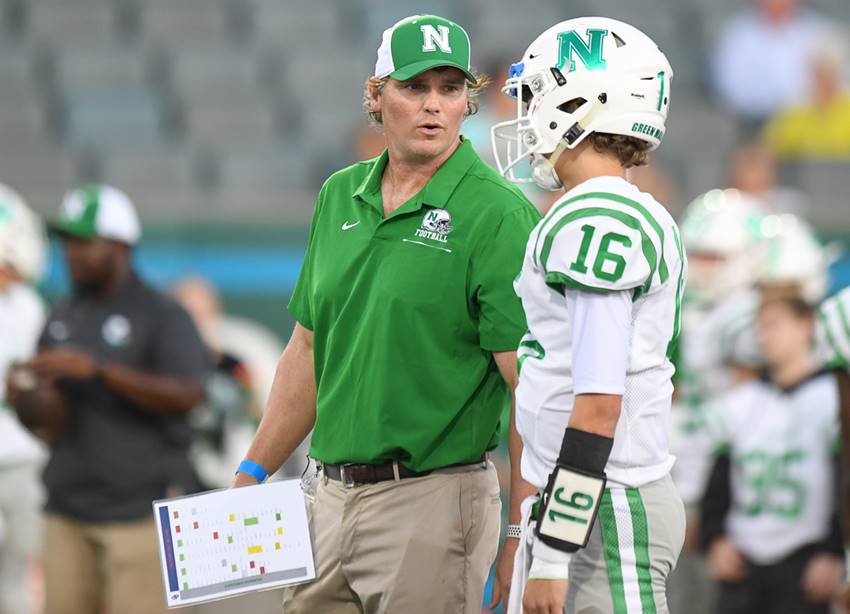 The Greenies pulled away in the second half to down the Cajuns in Ole Metarie.