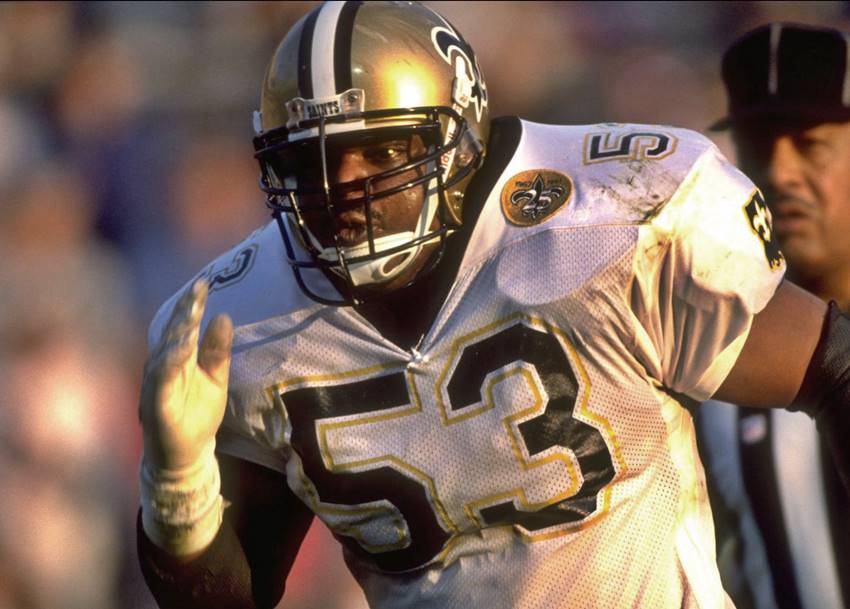 I turned on my computer Friday night, purely out of boredom. That usually means seeing what’s going on in New Orleans via posts on Facebook. I saw a post of an news article from longtime friend Ken Trahan of Crescent City Sports.

Former Saints linebacker Vaughan Johnson had died. I was stunned, shocked and sad. I know Ken is the ultimate professional and one of the most respected sports writers in the region, but I had to look everywhere to quell my disbelief.

No matter where I looked, the story was the same. Vaughan Johnson, one-fourth of The Dome Patrol known as the best linebacking foursome pro football has ever seen, had died. Number 53 was taken away from us way too soon at 57 of kidney issues and the eventual heart problems renal failure brings.

As a freshly minted reporter covering the Saints in 1989, I learned very quickly that Johnson was a quote machine. He spoke in what we reporters call “sound bites.” In other words, he gave me answers to my questions in full sentences, conveying complete thoughts and in a deep bass voice. If the team lost and you asked him about a loss, he would answer directly and with authority about why they lost and what the team needed to improve before the next game. A win? He answered with a big smile and, “Oh yes! This feels good.”

As a reporter you’re told not to become friends with players but you just can’t help it with some of these guys. Vaughan was one of those guys, not just for me but with almost every reporter.

You’ve likely already heard the news and know about his ferociously hard hits on the field, so I won’t dwell there.

Vaughan Johnson made me smile and laugh…a lot.

Vaughan owned a pith helmet and if he was wearing it, you knew two things – He was out to have a good time and his Dome Patrol partner Sam Mills was only a few feet away. If you hadn’t figured it out, Sam would let you know. If the pith helmet was on, Johnson was out to have fun and you were not to spoil it.

In London in 1990, I was walking with my then assistant, Dan Happoldt and a few other New Orleanians, when we saw pith helmet wearing Johnson running, bobbing, and weaving down the crowded sidewalk. He saw us and told us to block the sidewalk. “Don’t let anybody through, especially the Bobbies. They’re after me!” “Why?” I asked. The answer was vague and just as quickly as he had appeared, he vanished into the London night.

True to form, his good friend and one of the most sensible and level headed men I’ve ever known, Sam Mills, walked up. We told him about our encounter with Vaughan and Sam laughed. I told him about Johnson’s belief that the Bobbies were after him.

Sam just laughed and assured us that the London Police, were absolutely not chasing Vaughan Johnson, but admitted that Vaughan might believe that they were. Everyone had a good laugh and we showed Sam in which direction Vaughan had headed.

As we parted, I asked Sam if all was good and he assured me it was. He pulled me a little closer and looked me in the eye and said, “Alan, you didn’t see Vaughan tonight. You know?” I knew and I never reported it.

We talked a few times per year and we both seemed to enjoy meeting after his career had ended. I know I sure did.

Sam Mills died of cancer in 2005 and now Vaughan Johnson has joined his good friend. Ricky Jackson and Pat Swilling, the other half of The Dome Patrol remain, as do so many fans and friends, myself among them.