Remembering Ronnie Virgets – a racetrack storyteller like no other

Ronnie Virgets was, in a word, brilliant.

Before the term “multi-media journalist,” as many of us in the industry have become, was popular, there was Ronnie, who died Monday at the age of 77.

He was a man who made his mark with his words – written in his unmistakable prose or spoken in his one-of-a-kind Y’at accent.

His ability to weave a tale around and about the racetrack drew comparisons to the great Damon Runyon. Runyon never got to tell stories around New Orleans, though.

I had known about Ronnie at an early age since he and my father were classmates at St. Aloysius. We had even crossed paths while I was in college while working part-time at the local newspaper, as he would often pop into the newsroom to work on his regular series, “Railbird Ronnie.”

It was when I went to work at Fair Grounds two decades ago that I suddenly had full exposure to the man’s talents … and history.

An Emmy Award winner. An Edward R. Murrow Award winner. Two Eclipse Awards, emblematic of the best of the horse racing industry – one for his Gambit story on the funeral of another Runyonesque character, Allen “Black Cat” LaCombe, the other for his WGNO story on the December 1993 fire, and re-opening two weeks later, at the Fair Grounds.

He was the first to win media Eclipse Awards in both the writing and television divisions.

Eventually, well deserved honors for career achievement came Ronnie’s way – from the Fair Grounds, where he is in the Press Box Hall of Fame, and from the New Orleans Press Club.

One of my first days on the job at Gentilly, I had to write scripts for a handful of commercials to run on radio and television during the first few weeks of the racing season, to go along with video and music produced the prior season with Ronnie and the legendary Pete Fountain. It was a little frightening, to be honest; I had written thousands upon thousands of words in my career, but never a commercial.

Ronnie and I headed downtown to a recording studio to “fill the donut” to the pre-produced beginnings and ends of the commercials when magic happened.

I wrote four words to wrap up the 30 seconds of copy. What Ronnie would speak into the microphone that day would stick for the next seven years, and then some.

In the fall of 2002, Ronnie and I had just recorded the first set of commercials for the new season when he suffered a stroke. I vividly remember the internal discussion – if we had to record commercials without Ronnie, no one else was going to say his newfound signature.

And so we waited. He did come back later that season, and so did the signature.

If Ronnie’s achievements in the media weren’t enough, he even co-wrote a three-man live show about the track with Chris Champagne and Larry Beron called “Win! Place! Show!”

Among the brilliant tales Ronnie and his co-stars weaved throughout the show, one of his lines stuck with me for its simplicity and humor.

When Hurricane Katrina hit, Ronnie had stayed behind. He found himself on the second floor of his two-story house in Lakeview, where it took a boat – and some other things that shall go untold in this space – to evacuate him.

“When I was able to go back, the house was a goner – either that or an ultra-modern painting,” he told the Daily Racing Form’s Jay Hovdey in November 2005. “Somehow, I dug the two Eclipses out of the mud. The horse part was very salvageable. It’s just that the wooden bases are all warped and busted.”

As Ronnie’s health waned in recent weeks, he would have no doubt enjoyed the results surrounding the Triple Crown races, with New Orleanian Tom Amoss winning the Kentucky Oaks and horses who ran at the Fair Grounds this winter capturing both the Kentucky Derby and Preakness.

Now, “Railbird Ronnie” can grab a seat at a table with some of those other legendary racetrack characters and have a great view of the action.

Funeral arrangements for Ronnie Virgets have been completed. Services will be held on Saturday, May 25 at Jacob Schoen & Son Funeral Home, 3827 Canal Street in New Orleans. Visitation will begin at 9 a.m., with a mass following at 11 a.m. in the J. Garic Schoen Chapel. Condolences may be left at SchoenFH.com. 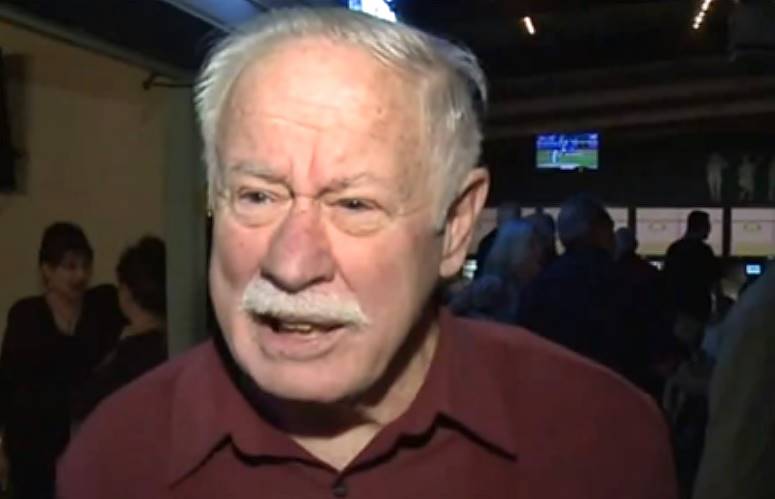 The only person whose words could do justice to Ronnie Virgets’ life would be Virgets himself.