It has been a tough weekend.

First, there was the traumatic plane crash which killed a pilot and Nancy Parker.

Now, there is the passing of Kathleen Blanco, who succumbed to complications from ocular melanoma Sunday. She was 76.

Kathleen Blanco exhibited class. She exuded calm, strength and strong faith in the face of the most difficult adversity possible, governing the state of Louisiana after Hurricanes Katrina and Rita in 2005.

Blanco made the tough call, deciding to support fixing and renovating what was then the Louisiana Superdome after it was damaged significantly following Katrina. The move was not popular outside of the New Orleans area and immediate south Louisiana. It cost her politically but she understood the significance of restoring a major player in the state’s economy.

She also understood the significance of keeping the Saints in New Orleans, a real question mark following the events of Aug. 29, 2005.

Finally, she understood the importance of providing the region with hope following the devastating damage and loss of life.

Blanco was honored by the New Orleans Saints, the Superdome Commission and SMG last season with a wing in the stadium she helped save and restore.

In February of this year, our Media Selection Committee for the Saints Hall of Fame overwhelmingly chose Blanco as the recipient of the 2019 Joe Gemelli Fleur de Lis award for her contributions to the New Orleans Saints, contributing to the betterment of the franchise while displaying strong support for it.

One of the great joys I have annually is calling those honorees whom we elect to the Saints Hall of Fame. Calling Blanco turned out to be a great experience for me. More on that in just a few paragraphs.

Blanco was not always a “yes person” for the Saints.

She engaged in tough talks with the Saints and Tom Benson over the lease arrangement between the state and the Saints with regard to the Superdome. She was tough but fair, working on behalf of the citizenry of the entire state, which she represented.

On June 6 of this year, Blanco was present at our press conference to introduce her as the recipient of Fleur de Lis award for her courageous stand to help New Orleans, the Saints and the Superdome following the storm. Our board of directors made a conscious decision to present the award to her then, rather than wait for the actual induction on Oct. 26 (set for 5:30 p.m. at Club XLIV in New Orleans). 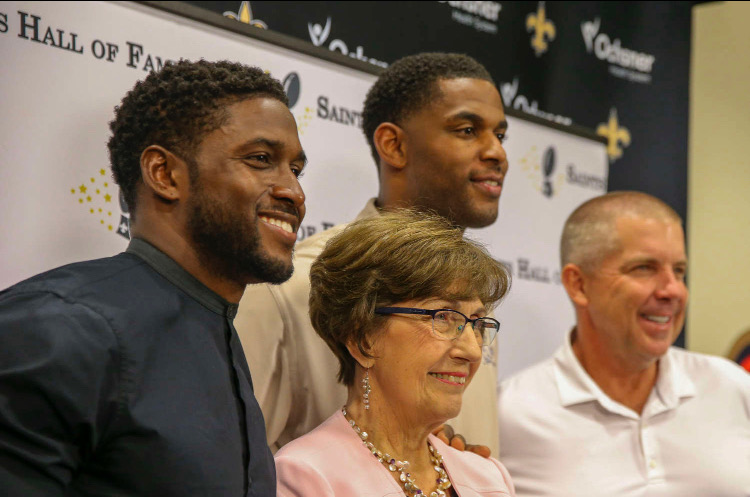 Even with all that star power, the main event at the introductory news conference was the presence of former Louisiana Gov. Kathleen Blanco, who mustered the strength amid her battle with incurable melanoma to appear Wednesday.

The stark reality of her tenuous hold on life was sobering. We recognized this. The decision was made.

Thank the good Lord that we made that decision.

Leading up to the press conference, I had an opportunity to speak with Kathleen on a couple of occasions by phone. We talked about common friends, about what she chose to do following Katrina, about family and about faith.

Blanco, an elected official devoted to the Democratic party, counted among her friends many persons of the Republican party. She readily spoke admirably about George W. Bush, John McCain and Steve Scalise, stating that while she may not agree on several issues with them, she liked, admired and respected those individuals and others.

She told me that given the opportunity, she would not blink or think twice about making the same decision to fund repairing the Superdome. Most likely, if not definitely, that decision cost her a future in politics. She did not run for re-election in 2007, yielding the stage to Bobby Jindal.

We spoke about her wonderful family, including her engaging, gregarious husband, Raymond or “Coach,” as so many know him as. It was a pleasure talking with “Coach” at the press conference. It was also great to meet her other family members, including her kind daughter, Monique Boulet, one of her six loving children.

We discussed our mutual faith and found true common ground in that aspect of our lives. Without a doubt, Blanco’s priorities were her faith, her family, her friends and the people of Louisiana, most certainly in that order.

When she arrived at the press conference, I met her in the parking lot of the Saints facility. She emerged from the vehicle in a wheelchair but was full of life.

At the press conference, she insisted on rising and climbing a small stage to join Sean Payton, Marques Colston and Reggie Bush, the latter two of whom will be inducted into the Saints Hall of Fame on Oct. 26.

She spoke eloquently and was incredibly thankful for being recognized for the honor. She spoke of her love of family, Louisiana and of the New Orleans Saints and of her admiration for Gayle Benson.

As she was concluding her thoughts, Blanco stated that while she appreciated receiving the award as perhaps the greatest honor of her lifetime, she was steadfast in remaining determined to “have you present it to me again” at the induction on Oct. 26. We all held out hope, though the odds were certainly stacked against it.

God had a different plan.

Blanco will not be in attendance on Oct. 26, at least in the flesh, but her spirit will certainly be felt and it lives on through her family. They will be on hand to enjoy the celebration of a life well lived.

When the press conference was done, the New Orleans Saints invited Blanco and her family members to stay and to have lunch in the team dining facility. It was a class move by the Saints for a classy family.

As we sat and enjoyed lunch, the conversation continued about all of the above topics. My friends and Saints Hall of Fame board members Jay Romig and Michael Hebert of the Saints then gave Kathleen and her family members a tour of the team’s indoor facility.

As it was time to depart, Kathleen leaned toward me and thanked me for giving her a wonderful day to remember for the remainder of her life. Unfortunately, the remaining days would be numbered, 72 to be exact.

As I watched the family vehicle depart, I could not help but wonder if it would be the last time I would see her. That would be the case.

Regardless of what your political persuasion is, you should admire those who choose to serve and choose to actually try to work with all others willing to work with others of all political parties, economic classes, sexes and races.

Speaking with Blanco helped open my eyes once again to the possibilities that exist for all—love, understanding, working together, fairness, equality and standing up for what you believe.

Kathleen stood for these basic principles. I will never forget our conversations which I will always treasure. She was a treasure.

Blanco is survived by her mother, Lucille Babineaux, along with Raymond and children Karmen, Nicole, Pilar, Ray and Monique, along with 13 grandchildren. 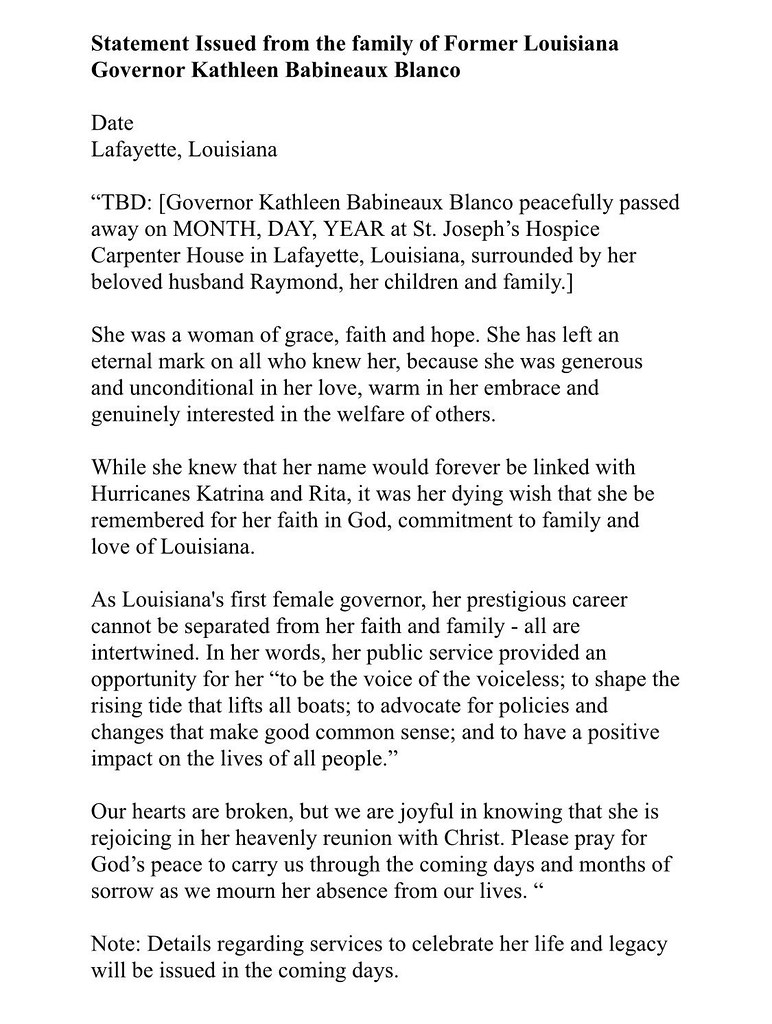