METAIRIE – Reggie Bush was the most glamorous Saints draft choice since Archie Manning in 1970.

Marques Colston was the most unlikely Saints draft choice to achieve stardom since Danny Abramowicz in 1967.

They were both drafted in 2006, became two of the most prolific offensive players in New Orleans history as well as key contributors to the 2009 Super Bowl championship team and on Wednesday they were introduced as the 2019 class of the Saints Hall of Fame.

Even with all that star power, the main event at the introductory news conference was the presence of former Louisiana Gov. Kathleen Blanco, who mustered the strength amid her battle with incurable melanoma to travel from Lafayette and receive the Joe Gemelli “Fleur de Lis” award, which goes to those other than primary front office and football operations members that have made significant contributions to the organization.

Traditionally the Fleur-de-Lis award would have been presented during the induction ceremony on Oct. 25, but Saints owner Gayle Benson took the opportunity Wednesday to present the award to Blanco, 78.

“I am more than thrilled simply to be here today,” Blanco said. “I do have a lot of challenges ahead of me and I’m going to plan to be here in October.”

Blanco, who served as Louisiana’s only female governor from 2004-08, was honored for her leadership in expediting legislation to fund the repair and re-opening of the Superdome in 2006 in the aftermath of Hurricane Katrina.

“We all came to the Saints in a greater, more intensified way in 2006,” Blanco said. “In that period after Katrina it became imperative that we all had to call on the deepest parts of ourselves to do the most intense work that any of us had ever thought about having to do.

The Saints have sold out every home game on season tickets since the Superdome reopened.

“We could not have had the same kind of recovery that we have experienced without the Saints creating enthusiasm,” Blanco said. “The Superdome did become a symbol of victory. People who were working on smaller properties looked at that and said if anybody can do that huge property we can do our property.”

Blanco referenced her decision not to seek re-election in 2007 when she said the restoration of the Superdome “didn’t come without me having to pay a price for being told that I had the wrong priorities using money for a stadium.”

“But at the same time,” Blanco continued, “I knew that the value was greater than just building a building, that this city and this region and Saints fans everywhere really needed to have something to rally around.

“After a year of hard, hard work, people who were rebuilding their homes and their businesses really needed a place to rally and to express joy and that is what we found. I’m glad to have been able to have played a small part in making all of this happen.”

Blanco was accompanied by her husband Raymond, two of their five surviving children and three of their grandchildren.

“This is the highlight of my life,” Blanco said. “This is the last thing I ever would have imagined. Think about that – for an average person like me just minding my own business and getting a call saying I’ll be in the Saints Hall of Fame.

“I was shocked really and deeply honored. I’m so proud to feel I’m a family member of the Saints now.”

She was flanked by Bush, Colston and coach Sean Payton, who drafted the duo as a rookie head coach, on the dais.

Payton referenced “the irony” of Bush and Colston being inducted together as the first and last draft picks, respectively, of one of the top draft classes in franchise history.

Not only was Bush the second overall pick, he was a Heisman Trophy-winning running back from USC and a ready-made celebrity that Payton likened to “Elvis Presley or Michael Jackson.”

Bush played with the Saints from 2006-10, accumulating 4,982 all-purpose yards and scoring 33 touchdowns.

He had one of his most significant performances in a 2009 Divisional Playoff victory against Arizona, returning a punt 83 yards for a touchdown to jump-start New Orleans’ march to the Super Bowl title.

“There will always be a spot in my heart for the city of New Orleans,” Bush said.

Colston, on the other hand, was drafted 250 spots after Bush after toiling at the little-known program at Hofstra University.

Both Payton and Colston acknowledged that Colston’s performance at rookie mini-camp called into the question whether he was capable of playing in the NFL.

But when Colston arrived for training camp in 2006, Payton said “each day he kept making pars and birdies.”

Colston, who celebrated his 36th birthday Wednesday, said he was in “survival mode” each day in training camp, but he earned a staring position as a rookie and went on to play 10 seasons while becoming the Saints’ all-time leading receiver – 711 receptions, 9,759 yards and 72 touchdowns.

All three honorees were connected by the 2006 season – Blanco’s efforts to get the Superdome reopened for the start of the season and Bush and Colston launching Hall of Fame careers as well as the golden age of Saints football, which has continued under Payton and quarterback Drew Brees even beyond the departure of Bush and Colston.

“Without Mrs. Blanco taking the initiative to ensure that we were able to have our stadium redone and put back together,” Bush said, “we wouldn’t have been able to go back in there and do the work that we did that year.” 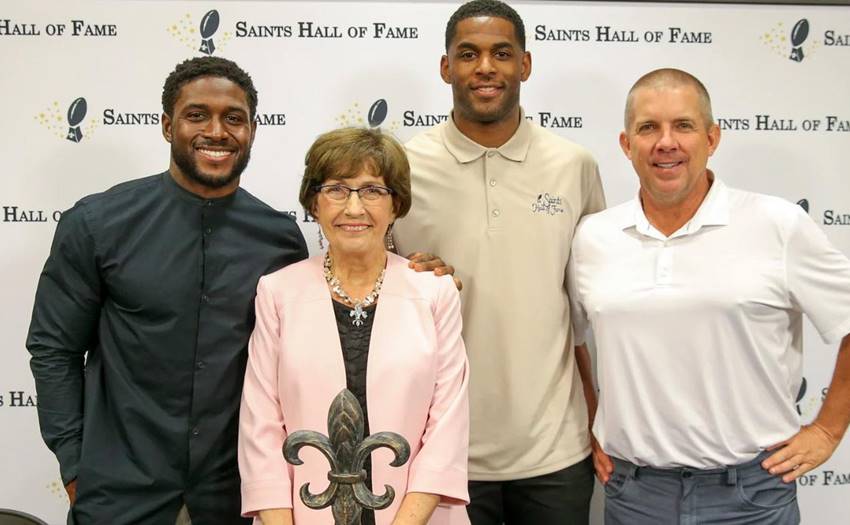 Reggie Bush and Marques Colston were chosen for induction in 2019, while former Louisiana Governor Kathleen Blanco has been chosen to receive the Joe Gemelli “Fleur de Lis” award.