Reflecting on Tom Benson on his birthday 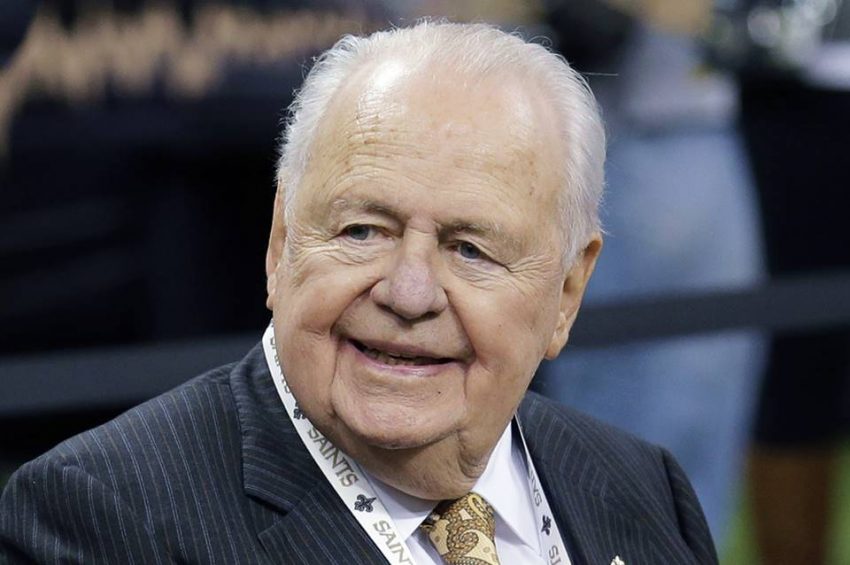 It has always been easy for me to remember the birthday of Tom Benson, since his occurs just a day before mine.

Today, Mr. Benson would have been 94.

Tom Benson was New Orleans through-and-through, having graduated from St. Aloysius and Loyola. He proudly served his country in the United States Navy. All three entities largely shaped Benson’s character and world views.

Benson was not born with a silver spoon in his mouth.

His father was a department store clerk. His mother was a homemaker. Benson was the oldest of four children, all boys, a regular at St. Roch Park and he was a boy scout as an adolescent.

Being born and raised, Benson was woven into the fabric of New Orleans.

Being born and raised, I became woven into the fabric of New Orleans and the community at-large, having moved to Jefferson Parish from the city as a youngster.

While I was aware of who Tom Benson was through his vast automotive interests, I did not know him.

My first encounter with him was the press conference in 1985 at Benson & Gold Chevrolet, announcing his purchase of the New Orleans Saints.

Benson had reached agreement with John Mecom to purchase the team on March 12, 1985. Mr. Benson officially became the primary owner of the Saints on May 31 of that year at a cost of $70.204 million, which turned out to be an incredible bargain.

When Benson spoke, I was a bit surprised, somewhat startled, to hear his clear New Orleans accent. In my mind’s eye, Benson would be a silver-tongued speaker, articulate and measured. Nothing would be further from the truth.

While it was not what I expected to hear from a self-made millionaire-turned-NFL-owner, perhaps it what I should have expected.

Tom Benson was New Orleans, to the core, a man who deeply valued his hometown, his education and his Catholic faith. Benson made annual retreats to Manresa House in a genuine attempt to maintain and deepen his faith-walk.

Benson quickly built a winner with the Saints with his shrewd hires of Jim Finks and Jim Mora. The team won a playoff game under Jim Haslett and Randy Mueller. The franchise reached the zenith of the profession, winning Super Bowl XLIV under Sean Payton and Mickey Loomis.

Though he had several missteps along the way and played hardball with the state of Louisiana in negotiations in wanting, even virtually demanding a new stadium at one time and seriously, genuinely flirted with moving his football team to his other “hometown,” San Antonio, Benson ultimately did the right things.

The Saints are still here and flourishing.

The Superdome is undergoing yet another massive renovation that will make it viable for many years to come.

The game is four quarters.

Perhaps there was a bad quarter, even two, but in the final analysis, it is about the final decisions, the end product.

In that realm, by any measure, Benson succeeded, despite a remarkably sad and difficult family split in 2015, alienating him from other family members, aside from his wife.

Benson, regardless of who loved and disliked him, made an unmistakable, unimpeachable mark on this community and beyond.

By entrusting Gayle Benson, his widow, with the keys to the kingdom of his vast interests, Benson ensured that business as usual would continue.

Gayle Benson, a deeply committed Catholic, has continued the wishes of her late husband in terms of her benevolence, which she strongly influenced him in performing more of in his latter years, and in keeping all of Benson’s key advisors and executives in the New Orleans Saints organization around him. Gayle Benson continues to give generously to a number of outstanding institutions and causes.

If Mr. Benson were alive today, I suspect the Pelicans would have changed general managers, as they did with the dismissal of Dell Demps.

I suspect the Pelicans would have changed coaches, as they did with Alvin Gentry and now Stan Van Gundy.

Benson was adept at hiring his leaders and allowing them to do their jobs, as Finks and Loomis have done. Mueller did as well for a short time but had a falling out with Benson, the only time the owner stepped in to make what some perceived as a controversial move.

In his latter years, it was very clear that Mr. Benson was a kindler, gentler version of the man that guarded his persona publicly, sometimes to the point of convincing others that he was gruff, somewhat cold and seemingly unhappy at times. He was undoubtedly guarded, very guarded, a man who deeply valued his privacy, despite becoming a huge public figure.

Benson worked his way up from the starting position in the automotive business to running an empire. It required incredibly hard work, hard times and making hard decisions.

He saved not one professional franchise but two for New Orleans, including with his purchase of the New Orleans Hornets (now Pelicans), who were owner-less, being run by the NBA at the time Benson stepped in.

Had that happened, the facility next to the New Orleans Saints and Pelicans offices and facilities would still be a baseball stadium and the market would still have a baseball franchise scheduling 70 or more games a year and attracting other sports to the venue, outside of rugby.

By any measure. the citizenry of New Orleans and the entire metropolitan area should be very grateful for what Tom Benson did in extraordinary fashion over a long lifetime. The measure of a man is not determined until the journey is complete.

As the line goes from “We Fall Down,” an outstanding Christian anthem, “the saints are just the sinners who fall down but get up.”

As the ardently Catholic Benson would reference, Proverbs 24:16 says “a righteous man may fall seven times and rise again.”

Benson fell down, as we all do, on several occasions.

He would rise again. While not a saint, this community as a whole owes him so much for still enjoying our Saints, his prized possession.

Before passing from this existence, Benson figured out what we all eventually must figure out, that we cannot take anything with us from this earth when we depart it.

He became a splendid giver.

Benson was a success and he left behind a slew of successes, entities and jobs to enrich the New Orleans community.