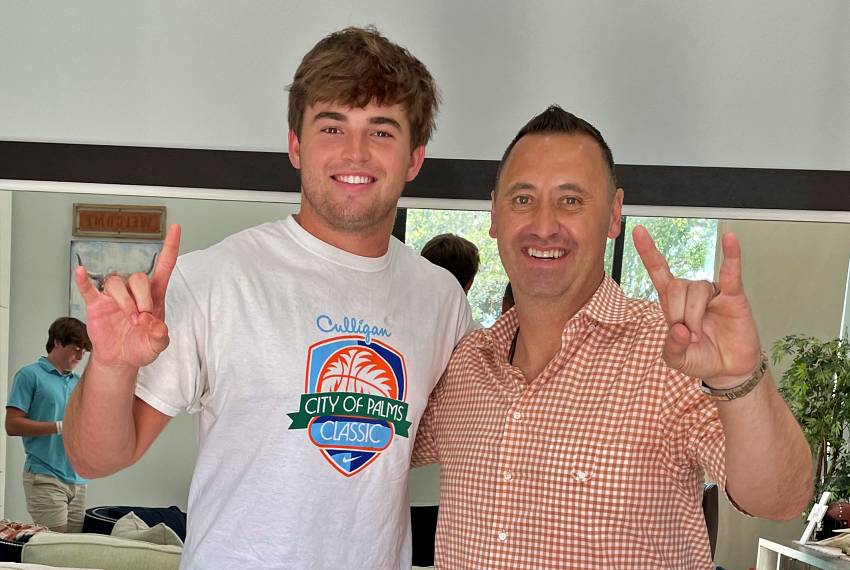 The three-star recruit in the 2023 class reportedly had offers from 10 other schools including LSU and Alabama.

“He loved LSU. He loved Alabama. He loved Virginia. He had a great visit to Tulane,” said Newman head coach Nelson Stewart. “He just loved the school (Texas). It has a New Orleans feel. A lot of Newman kids have gone there. Will has phenomenal parents. They made sure it wasn’t an impulsive decision. They let him decide.”

Randle has served as a tight end, H-back and defensive end for the Greenies. He is the top rated Louisiana tight end in the 2023 class as well as Newman’s first All-State selection at the position.

“His versatility is outstanding at tight end,” Stewart continued.”(Sarkisian) is incredibly imaginative; he’s authenic. We run the same type of offense they use.”

Randle is a smaller but more mobile tight end. “He came in and changed our offense,” Stewart detailed on Randle’s arrival as a freshman. “He’s a violent blocker and has finesse. He can be an H-Back. He’s a playmaker who thrives on screen passes. As a standup defensive end, he’s the most dominant edge rusher I’ve ever seen.”

While Stewart was dating his current wife, he had an early meeting with his future prized TE while Randle was in a baby’s crib.” She was babysitting Will and told me that I’ve got to come in and see this kid. I walk in and saw what looked like a 3 year old in this crib,” Stewart laughed.” He stood up and looked me eye to eye.”

Randle is the second tight end to commit in the current Longhorns recruiting class. Texas is hoping the 6-foot-3, 220-pound Randle will be joined in the class by Newman teammate Arch Manning. Randle has already begun forming relationships with the other six Longhorn pledges in the 2023 class. Will’s father John was a Newman quarterback in 1989 and 1990, preceding the Peyton Manning era at Newman.

Although Randle and Manning took the visit to Texas together, their recruitment is not connected.

“They’re totally separate,” Stewart said. “One will have nothing to do with the other. Both were interested in Texas, but (his recruitment) stands on it’s own. Arch will do the right thing for him.”

Expectations are high for Randle, who possesses the physical ability and maturity to contribute early for the Longhorns.

“He’s not just good at one thing. He’s selfless, great in the run game and the passing game and dominant on defense. He’s kind of our engine,” Stewart noted.

The veteran coach stressed that he has more than one truly exceptional player in his program.

“In my 24 years, he is the best total football player on both sides of the ball I have ever had.”