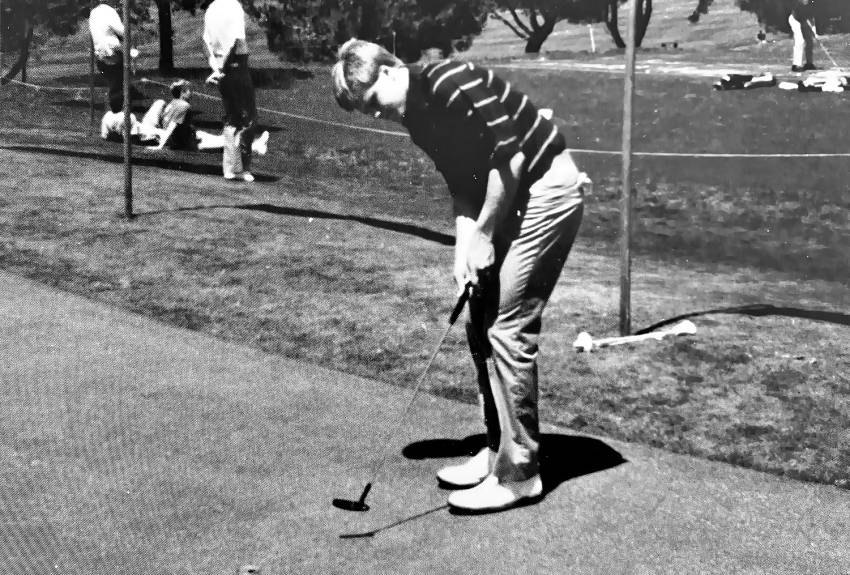 Mike Heinen had the well-earned reputation as a long hitter from the time he first teed it up at a PGA Tour event.

The UL All-American led the Tour in driving distance two different seasons and was among the leaders through most of his early years on Tour.

“He was hitting it a long way before that became the thing to do,” said long-time Ragin’ Cajun golf coach Bob Bass. “He did it before all that was popular, and before all the equipment became so high-tech that it let a lot of guys hit 300-yard drives.”

But it takes more than power to be successful in golf, and Heinen was successful enough to earn conference medalist honors and to go on to earn nearly $2.4 million as a PGA Tour professional well before huge purses were commonplace. And one little-known fact is enough to show that Heinen had the all-around game.

The PGA Tour began charting “Greens in Regulation” as part of its playing statistics in 1992. Over the 31 years since that time, only two players in Tour history have ever hit 50 consecutive greens in regulation in tournament competition. Bob Lohr was the first, hitting 51 greens in a row in 1993.

The other one? Mike Heinen, who hit 50 straight greens in his second full year on Tour. Since then, the closest anyone’s come was when Jerry Kelly hit 48 straight in 1996.

Make no mistake, though … it was the power game that enabled the Rayne native and long-time Lake Charles resident to find success on both the collegiate and professional level, and made him one of the 2022 inductees into the UL Athletic Hall of Fame.

Heinen is best remembered for what he did in only his 10th start on the PGA Tour, when the then-rookie shot consistent 67-68-69-68 rounds at the 1994 Shell Houston Open. His 16-under-par 272 score gave him a three-stroke win over Tom Kite, Hal Sutton – both members of the World Golf Hall of Fame – and Jeff Maggert, who had top-five finishes in each of the four majors in his career.

Only one other former Cajun player — Craig Perks in the 2002 Players Championship – has ever won a PGA Tour event, and that win and the $234,000 first-place prize propelled him into the FedEx Cup Top 25 for the first time. He had three other top-10 finishes that year, and followed up with two runner-up finishes, three top-10 and six top-25 finishes the following year. That year included tying for first and losing a playoff to Davis Love III at the Freeport-McMoran Classic (now the Zurich Classic of New Orleans).

“You could always tell that he had the ability to be successful professionally,” Bass said. “He became an extremely clutch player in his last couple of years in college, and he obviously carried that over onto the Tour.”

Heinen’s best season on the money list came in 2003 when he had four top-25 finishes and finished with $432,417 in earnings including a tie for 11th at the Greater Hartford Open and a tie for 12th at the Chrysler Classic of Greensboro. He also had his PGA Tour career low round of 62 that year at the Greater Milwaukee Open.

That wasn’t his low round as a professional, though, and that lowest round, a stunning 61, came on what was in effect his “home court.”

Heinen spent time on both the PGA Tour and what was at the time the Nationwide Tour (now the Korn Ferry Tour), and rarely missed playing in the developmental tour’s local event. He played in the Chitimacha Louisiana Open a record 17 times, and in the 2002 Open he used that 11-under 61 to finish with a tournament-record 24-under-par score. The only problem was that tour veteran Steven Alker also finished at 24-under, and Heinen eventually lost the playoff on the second hole after having a relatively short putt for the win on the first playoff hole.

“I had probably a two and a half-footer to win it, and had to go back to the tee again and lost in the playoff,” Heinen said. “I remember vividly coming through the tunnel afterward and seeing my daughter, and she could see it in my eyes that I was frustrated. It would have meant a lot to have won that tournament.”

Heinen made 180 professional cuts – 90 on each tour – after turning pro following his senior year and after a storied college career. A four-year letterman, he led UL to its first-ever NCAA Division I Championship appearance as a senior in 1989, when the Cajuns finished 15th in the national event. Heinen himself finished 12th in the individual division, the second-highest finish ever by a Cajun player.

“Before we had a conference to compete in, Mike was a consistent high finisher in some of the best tournaments around the South wherever we could get in,” Bass said. “But when we joined the American South, he just stepped up his game and started showing the type of player that he was. That was so great to see because he was always one of the good guys, and still is.”

Fans are encouraged to stay engaged with the Ragin’ Cajuns by downloading the #GeauxCajuns app. Click here for iOS/Apple platforms and here for Android platforms.