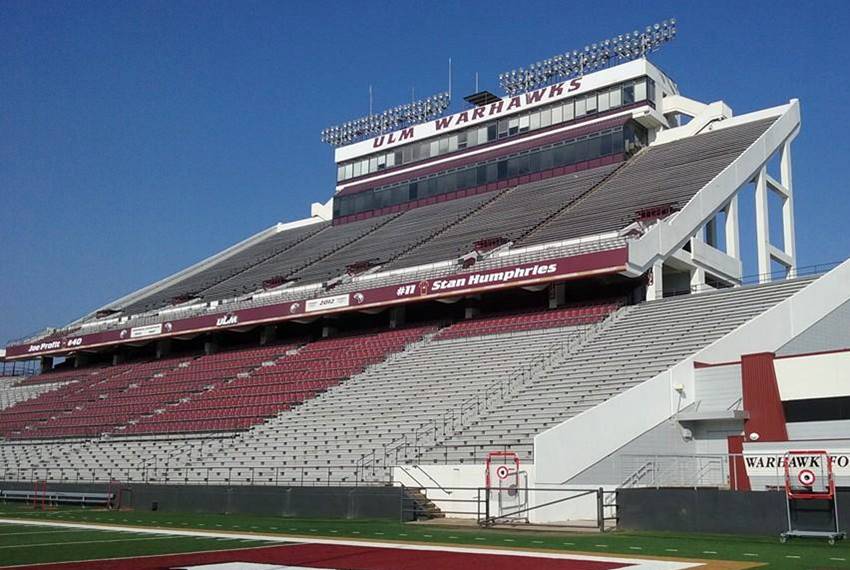 LAFAYETTE – Coming off its first loss on the gridiron in over a year, the Louisiana Ragin’ Cajuns Football team officially opens Sun Belt Conference play on Saturday when it visits in-state foe ULM at Malone Stadium.

Kickoff is scheduled for 7 p.m. and will be streamed live on ESPN+ with Nick White (pbp) and Desmund Lighten (color) providing commentary.

Fans will able to listen to the game worldwide on the Varsity Network, Hot 107.9 FM and ESPN 1420 AM with Jay Walker (pbp), Gerald Broussard (color) and Cody Junot (sideline) on the call. Live statistics will be available at CajunStats.com.

The Ragin’ Cajuns claimed a 21-16 win in another nail-biter in last year’s regular-season finale at Cajun Field. Thirty games in the 56-game series have been decided by a touchdown or less with 16 contests being decided by a field goal or less.

ULM opened its season with losses at Texas and Alabama and sandwiched around a 35-7 win over Nicholls on Sept. 10.

Season tickets for the 2022 campaign are on sale now and can be purchased by visiting Account Manager. For more information call the Louisiana Athletics Box Office at the CAJUNDOME at (337) 265-2104.

Fans are encouraged to stay engaged with the Ragin’ Cajuns by downloading the #GeauxCajuns app. Click here for iOS/Apple platforms and here for Android platforms.

LOUISIANA OPENS SBC ACTION AGAINST IN-STATE WARHAWKS
• Louisiana opens its 22nd season of Sun Belt Conference Football when it travels north to Monroe to face ULM at Malone Stadium. The meeting will be the 57th between the schools with Louisiana holding a 31-25 lead in the series.
• Thirty of the 56 games in the series have been decided by seven points or less with 16 games decided by three points or fewer.

A LOOK AT THE RAGIN’ CAJUNS
• Louisiana Football enters the 2022 season as the reigning Sun Belt Conference Champions and four-time defending champions of the Sun Belt West Division.
• The title was the program’s first outright Sun Belt Conference title in program history and the team’s first outright title overall in 53 years.
• Louisiana is 14-7 in all-time SBC openers and have won 13 of its last 16 games to open conference play.
• For the fourth consecutive season, the Ragin’ Cajuns are predicted to win the West Division after picking up a league-best 95 points and earning a league-best 12 first-place votes in the Preseason Coaches’ Poll.
• Coach Michael Desormeaux, a former UL quarterback from 2005-08, owns a 3-1 career record after replacing Billy Napier (now at Florida) and leading the Ragin’ Cajuns to a 36-21 win over Marshall on Dec. 18, 2021, in the R+L Carriers New Orleans Bowl.
• Louisiana enters the weekend leading all FBS schools with eight interceptions on the season.
• Louisiana is second among FBS schools in turnover margin (+9), fourth in turnovers forced (10), fifth in punt returns (23.3), sixth in fewest turnovers (1) and eighth in tackles for loss (3.0/g).
• Louisiana’s 33-21 setback at Rice last Saturday was its first loss in 378 days.
• Louisiana completed a perfect regular season in Sun Belt Conference play (8-0). The Ragin’ Cajuns had been perfect in league play just one time in their history prior to last season, posting a 5-0 mark in Gulf States Conference play during the 1970 season.
• Louisiana finished the regular season at No. 16 in the AP Top 25, No. 18 in the USA Today/AFCA Coaches Poll and No. 23 in the College Football Playoff Top 25.

TEAM NOTES
• Over the last four seasons, the Louisiana Ragin’ Cajuns have won four Sun Belt Conference West Division titles, won the 2021 Sun Belt Conference Championship, were the 2020 Sun Belt Co-Champions and have been victorious in three bowl games (LendingTree Bowl [2020) and SERVPRO First Responder Bowl (2021), R+L Carriers New Orleans Bowl [2021]).
• Louisiana has won its last 11 games at home – matching the school-record set during the 1976-77 seasons.
• Louisiana’s roster has 94 players on its roster (68.1 percent) who hail from within the Pelican State – the most of any of the five FBS programs in the state (Louisiana, LSU, Louisiana Tech, Tulane, ULM).
• Head coach Michael Desormeaux is the first Ragin’ Cajuns coach to start his career 3-0 since A.L. “Red” Swanson in 1950.
• Louisiana owns a perfect 16-0 record against Sun Belt West Division opponents and is 26-7 overall against Sun Belt opposition over the last four seasons.
• In 2022, Louisiana is ranked third in the Sun Belt Conference in scoring defense (20.3) and is fourth in total defense (356.7).
• Louisiana’s eight interceptions through the first three games are two off the mark set during the 2021 season.
• The Ragin’ Cajuns are fourth in the SBC in rush defense allowing 99.3 yards per game.
• Louisiana’s offensive line returned a combined 23 career starts heading into the 2022 season. AJ Gillie (12), Carlos Rubio (8) and David Hudson (3) each earned starts with newcomers Jax Harrington and Nathan Thomas earning their first career starts in the season-opener against Southeastern Louisiana.
• Last year’s defense ranked first in the Sun Belt and 11th nationally in scoring defense (18.5), while leading the league and ranking 22nd in the nation in total offense (404.8).
• Louisiana’s secondary looks to continue its impressive play after the Cajuns ranked first in the Sun Belt and 14th in Division I in passing yards allowed (190.1).
• The Ragin’ Cajuns return 69.5 percent of their takeaways from a season ago, including 80 percent of their interceptions. Eric Garror led the unit with two picks in 2021.