Prout’s fourth-quarter score, a 50-yard scamper with six minutes remaining, eliminated all momentum for the Blue Jays just two plays after Jesuit’s first touchdown of the game, a 7-yard run by senior tailback Jaron Duplessis at the 6:48 mark.

Trailing 21-10 at the time, Jesuit head coach Ryan Manale called for an onside kick that was recovered by Curtis (3-1, 1-0 District 9-5A). The Patriots took advantage of the great field position with Prout’s run providing the dagger in the district opener for both teams.

What Prout lacks in size, he more than makes up for it with speed and agility.

“He’s that kind of running back,” said J.T. Curtis, the winningest head coach in Louisiana history. “You don’t think he can make those kind of runs, but he’s very capable. He’s physically tough, has great moves, and can accelerate into the secondary.”

Prout, a junior, ran for 150 yards on nine carries in a very well-balanced rushing attack for the Patriots. Junior Jason Gabriel rushed for 77 yards and senior Aaron Johnson, Jr., added 60 yards and a touchdown that came with just 20 seconds left before halftime.

“I think my best quality is when I’m in open field. My agility is, I think, high power, especially in open field,” Prout said before giving credit to his offensive line and the Patriots defense. “All those guys on defense, Justin Horne leading the way, they fight all day. That’s what we do. We work at practice. We sweat…it’s like a family.”

“He did a tremendous job, as did the whole front line. Our defensive line continues to get better,” noted coach Curtis.

Signs of that improvement showed in containing the Blue Jays offense most of the night. Senior kicker Aidan Corbello gave Jesuit a 3-0 lead with 9:08 left in the first half before Curtis took a 14-3 lead before the horn.

Junior quarterback Beau Perez found Jace Larsen eight times for 77 yards but Curtis made the Blue Jays work for every completion to the standout senior receiver who put on a show in last year’s Division I state championship playoff run that ended with a tough loss in the final to Catholic High. 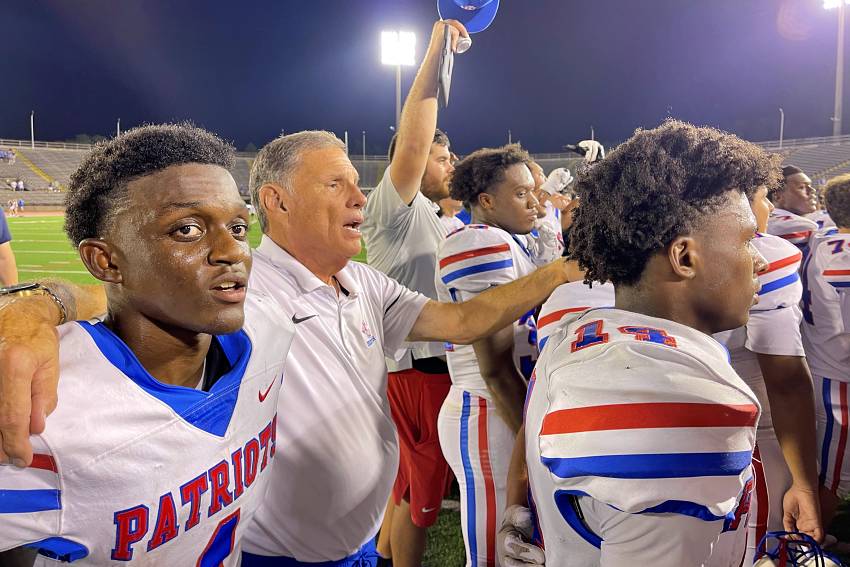 With the triumph, John Curtis avenged a pair of close losses to Jesuit last season including a 14-13 playoff defeat.

The Patriots will host Holy Cross on next Friday and Jesuit (1-3, 0-1 in 9-5A) will play Saturday, Oct. 1, against St. Augustine at Tad Gormley as both teams continue district play.