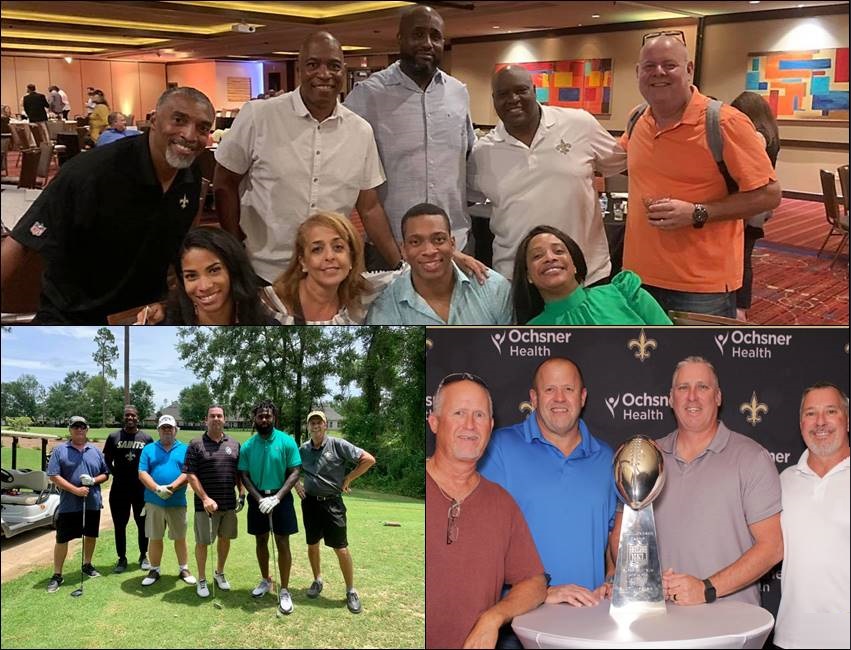 The fifth annual Saints Hall of Fame weekend in Biloxi concluded Friday night with the Biloxi Shuckers baseball games against the Montgomery Biscuits at MGM Park.

Saints alumni were introduced on the field and graciously signed autographs and took pictures with patrons throughout the evening on a beautiful, breezy night.

Biloxi Shuckers general manager Hunter Reed welcome all who enjoyed the festivities, though the Biscuits, the Double-A affiliate of the Tampa Bay Rays, swept both games, winning the completion of a suspended game from Thursday night 12-1 before taking the Saints Hall of Fame game 3-2.

The Shuckers are the affiliate of the Milwaukee Brewers.

“Our fans always turn out for and always look forward to and enjoy Saints Hall of Fame Night,” Reed said. “We have a tremendous Saints fan base on the Gulf Coast and it is great that fans can actually meet some of the greats in Saints history here.”

The first event was the fourth annual Saints Hall of Fame Reception/Auction at IP Casino Resort in Biloxi on Thursday evening.

On Friday, the Saints Hall of Fame Golf Scramble took place at The Oaks in Pass Christian.

Put on by Main Street Biloxi and the Saints Hall of Fame, 90 golfers enjoyed a fine course on a fine weather day, having a chance to play with Saints alumni.

Biloxi Mayor FoFo Gilich and Kay Miller of Main Street Biloxi, the golf tournament and events were a huge success with proceeds benefiting the non-profit Saints Hall of Fame Museum.

“These are a couple of days we really look forward to every year,” Gilich said. “Our relationship with Ken and with Mickey Loomis and the Saints organization is greatly valued. This is a boost to our economy annually and more importantly, it gives our Biloxi and Gulf Coast residents and visitors a chance to meet some of their Saints heroes through the years.”

Super Bowl XLIV champions Garrett Hartley and Courtney Roby participated in all events and each threw out a first pitch at the Shuckers game.