The week after Christmas brings many boys high school basketball tournaments across Louisiana, and perhaps the most prominent one in Acadiana is set for its 39th year.

The Sunkist Shootout hosted by St. Thomas More featured a cross section of teams participating from Katy, Texas all the way to the New Orleans and Bayou regions.

The tournament starts Monday with bracket play and culminates with the championship Game on Thursday at 7:15 p.m.

“We have a good cross-section of teams coming to Lafayette again this year,” noted Broussard. “I have had several guys who played for me bring their teams back to the Sunkist each year.”

The Cougars are coming off of a third place finish in another premier tournament, the Country Day Classic, last week in Metairie.

“We will grow from our experience, and we hope to take the Sunkist title,” said Broussard about his 11-2 squad.

Other area teams to watch in the Sunkist are STM district rival Teurlings Catholic (7-0) as well as Barbe (12-1) and North Central (13-3). A new team participating in the Sunkist is the St John the XXIII Lions from the Houston Area, coached by STM alum Brandon Mouton.

Two teams that also played in the Country Day Classic last week and were also scheduled to play in the Sunkist – Brother Martin and St. Louis Catholic – had to drop out due to COVID-19 protocols within their programs. North Central as a replacement for one of the two teams, will receive a first round bye and will play on Tuesday afternoon against the winner of Teurlings Catholic and St. John XXIII.

Sacred Heart-Ville Platte
The Trojans are coached by Jean-Paul Boullion, a STM alum. His Trojans have a 6-8 record this season.

Ascension Episcopal
The Blue Gators under STM alum Eric Mouton are 13-3 on the year with a win over Episcopal-Baton Rouge, 43-42

Ellender
The Patriots are 8-5 on this season while dealing with adversity from Hurricane Ida which damaged the Ellender Gym earlier this year to force them consistently on the road. The Patriots have wins over Booker T. Washington-NO (65-52) and Parkview Baptist (55-38)

St. Thomas Aquinas
The Falcons are 5-5, trying to restore the glory from the era of former coach Errol Gauff.

Riverside Academy
The Rebels are 3-8 with a win over John Ehret (69-64). It’s a rebuilding phase under a new coach made more challenging after their school also was damaged by Hurricane Ida.

Opelousas Catholic
The Vikings are 3-8 this year and have a win over Ascension Episcopal (66-53).

St. Thomas More
The host Cougars are 11-2, having already played in two of the biggest tournaments in the state where their two losses came to Eleanor McMain (65-41) in the Newman Invitational and last week in the Country Day Classic to Edna Karr (54-38). STM won the Centerville Tournament and took third place in the Country Day Classic, defeating the host Cajuns (59-55) in a game that aired live on Crescent City Sports.

Teurlings Catholic
The Rebels are a surprising 7-0 on this season as a program on the rise under coach Jake Dueitt.

St John XXIII (Texas)
The Lions are the only out of state school in the Sunkist this year, hailing from Katy just outside of Houston.

North Central
The late addition to the Sunkist Shootout is 13-3 including wins over two the biggest traditional powers in the state. The Hurricanes have beaten St. Aug (73-55) and Southern Lab (70-52.

Game One
Sacred Heart-Ville Platte vs. Ascension Episcopal 11:15 AM 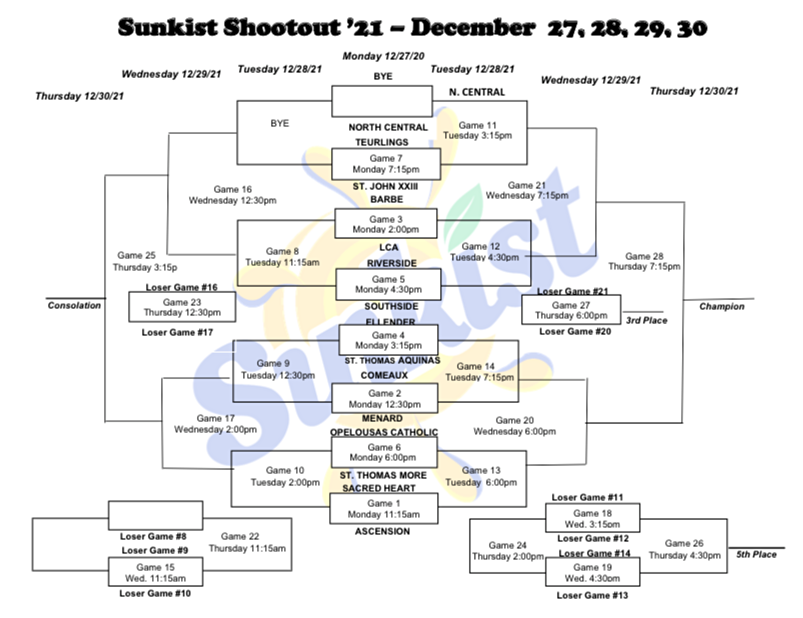