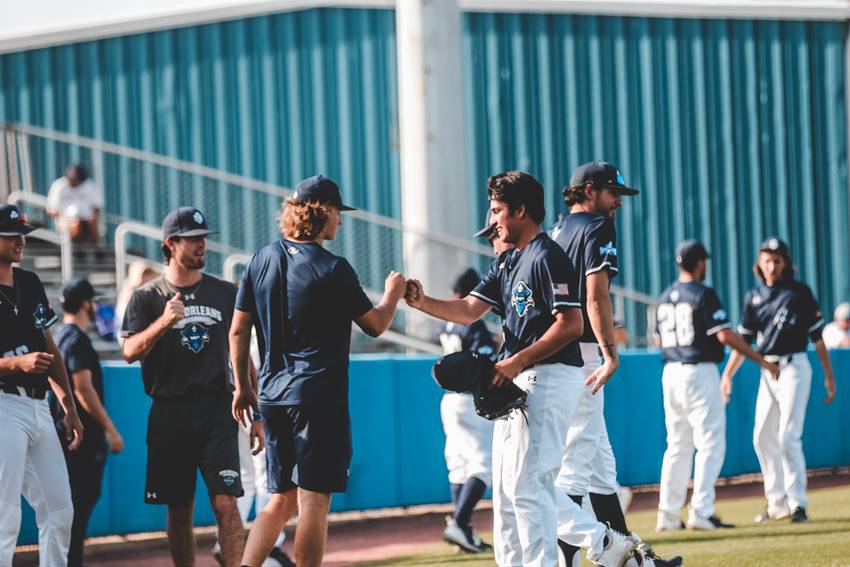 NEW ORLEANS – The New Orleans Privateers vaulted into first place in the Southland standings and secured the Pontchartrain Bowl with a doubleheader sweep of the Southeastern Lions on Saturday at Maestri Field. The Privateers won by scores of 8-4 and 11-3.

TROPHY SECURED
For the second time since the Pontchartrain Bowl was created in 2015, it has made its way to the Lakefront. It was the first series win over Southeastern since ’16 when the Privateers took two out of three.

GAME ONE
Chris Turpin went the distance for a second consecutive weekend and the Privateers scored all their runs in two innings during the first game victory.

Turpin continued to improve his strikeout-to-walk ratio with seven strikeouts and no walks in his 103-pitch complete game. It was the third of the season for the senior.

The Privateers put up three runs in the third right after Southeastern grabbed a brief lead in the top of the frame. On the heels of back-to-back one-out walks, Kasten Furr drove in the first run with an RBI single. Two batters later, Pearce Howard scored two with a single of his own.

New Orleans opened the game up with a five-run fifth inning. The Privateers continued to go to work on Southeastern starter, Trey Shaffer with five hits in the inning. The last came when Beau Bratton hit his fourth home run of the season.

GAME TWO
The Privateers wasted no time jumping on Will Kinzeler. It began in the opening statement when Luther Woullard hit a three-run home run. The Privateers added another run in the second inning on a Gaige Howard RBI sac fly.

Southeastern first hit the board with two runs in the third but that was all Brandon Mitchell allowed in 6.1 innings of work.

However, the Lions, trailing 6-2 in the seventh, loaded the bases. That’s when Caleb Seroski came in and caught lightning in a bottle. He induced a double play ball off Preston Faulkner to end the threat.

From there, the Privateers went in cruise control. They scored five in the bottom of the inning, capitalizing on three walks, a hit batter and an error.

The 7-8-9 hitters in the lineup in Travis Gober, Jackson Murphy and Darren Willis combined for seven hits and four runs.

NEXT UP
The Privateers will go for the sweep of Southeastern on Sunday, which would be their first against the Lions since entering the Southland. First pitch is scheduled for 1 p.m.