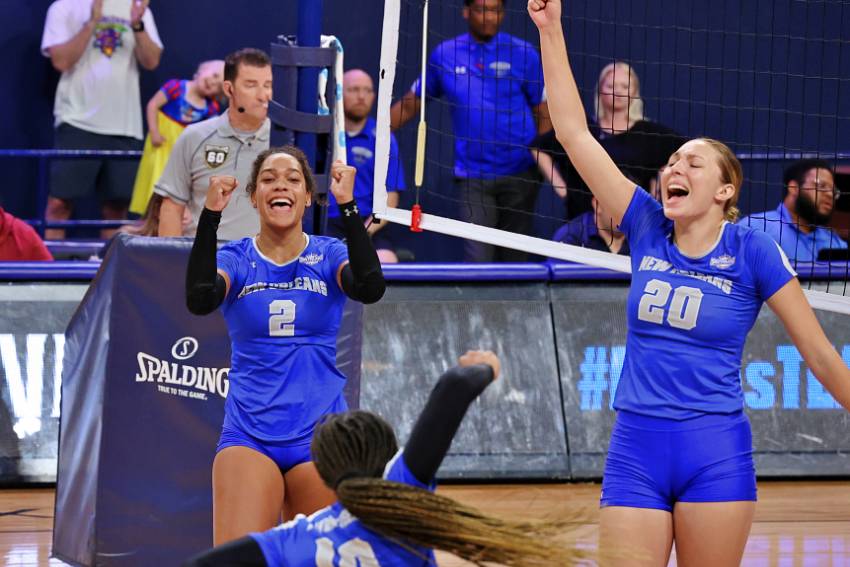 For the tournament, the Privateers went undefeated. It was the first time New Orleans went unbeaten in a home tournament since 2015.

ALL-TOURANMENT AND MVP RECOGNITION
Sophia Ewalefo concluded a fantastic weekend with 14 kills and 21 digs for her second double-double of the tournament to earn MVP honors. Ewalefo had 44 kills, 39 digs, six total blocks and five aces for the weekend.

Sydney Gott also earned a spot on the All-Tournament Team. Sydney finished with eight total blocks and had an 11-kill performance, which was a new season best in the tournament finale against Western Illinois.

Rita Zecchin earned Libero of the Tournament after starting at the position all three matches. Zecchin had 44 digs on the weekend in 11 sets.

HOW IT HAPPENED
In the fourth and decisive set, the Privateers raced out to a 9-4 advantage. Trinity Jackson had kills on consecutive rallies at the end of the run. From there, New Orleans was on cruise control in statistically their most efficient set of the day.

The Privateers hit .387 with 13 kills and just one error in 31 attempts. Defensively, they held the Leathernecks to a .146 attack percentage on the day.

The Privateers hit a big run early in the first set to gain separation on the scoreboard. Leading 5-4, New Orleans went on an 8-1 run to extend their advantage to seven. New Orleans never looked back in a set where they hit .333 compared to a -.059 attack percentage by the visitors.

New Orleans had to battle from an early deficit in the second set. The Privateers did not take their first lead until 16-15. From that point it was a battle that saw five ties from that point. New Orleans trailed 23-22 but an Ewalefo kill and two blocks helped finish off the set and gave the Privateers a 2-0 lead.

Western Illinois won the third set behind the strength of an 8-3 run to start the set. Brittany Wulf and Hailey Sperling combined for four kills in that span.

INSIDE THE BOX
Kamryn Scroggins piled up 46 assists on top of nine digs and two blocks. Ewalefo (14), Gott (11) and Jackson (11) all reached double figures in kills. Mauri Carver finished with seven kills and was in on seven blocks. Chandler Lee finished with nine kills on the day.

Ewalefo led the way in digs with 21. Zecchin had 18 digs and Micah Hall posted 15. Scroggins and Ewalefo each had two service aces.

NEXT UP
The Privateers will take part in the UTA Classic in Arlington next Friday and Saturday where they will face UT-Arlington, Lamar and Prairie View A&M.