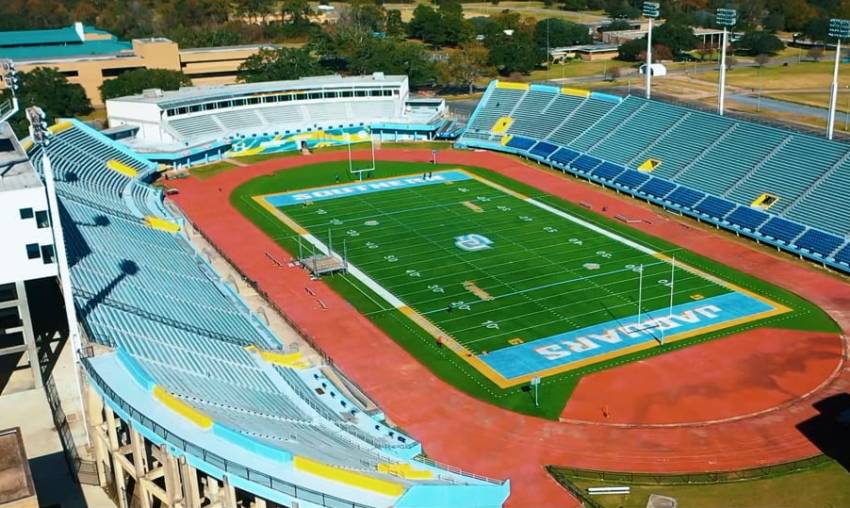 But whatever the game is billed, the fact remains the Cowboys (0-2) are looking to get in the win column before opening up Southland Conference play next week at UIW. The Cowboys know in Saturday’s 6 p.m. contest, which will broadcast on ESPN+, they’ll have to play a complete game in all phases of the game.

“We’re going to have to win our one-on-one match-ups and create separation in the passing game,” said Wilson. “We have to be able to run the ball efficiently. Defensively, I think we have to contain the quarterback, or quarterbacks.”

The Jaguars (1-1) have played three quarterbacks in their first two games.

• There are several McNeese-Southern connections for this game.

• Southern head coach Jason Rollins began his coaching career as a manager then student assistant at McNeese, his alma mater, in 1996 before landing a full-time job as the Cowboys defensive back coach in 1997 and 1998, helping lead the Cowboys to the 1997 1-AA/FCS national title game.

• He returned to McNeese in 2005 and 2006 as the program’s co-defensive coordinator.

• Southern assistant head coach and linebackers coach, Charlie Ayro, a McNeese Hall of Fame linebacker and assistant coach for the Cowboys from 2001-03 and 2016-18.

• Southern DB coach, Blake Yorloff, was a McNeese DB and graduated in 2019.

• Jaguar DT Camron Peterson played three seasons for the Cowboys at defensive tackle, most recently in the 2021 spring season where he recorded nine tackles in six games played.

Wilson played a big part in Rollins, a McNeese letterman and graduate, chasing his dream of becoming a head coach at Southern University.

“He was a student here (at McNeese), then a student-athlete and then began his coaching career here,” said Wilson about Rollins. “I know the respect he has and how proud he is of McNeese. We’re also proud of him and his ability to go on and chase the dream of becoming a head coach at a university he wanted to be.”

Wilson hired Rollins on his staff at UTSA then promoted him to defensive coordinator.

“He’s done a really good job (at Southern) in the short time he’s been there,” said Wilson. “He has kept a majority of his staff together.”

• Saturday’s game will be the third meeting between the Cowboys and Jaguars and the second time to play at A.W. Mumford Stadium.

• McNeese holds a 2-0 lead in the all-time series.

• The two teams last played in the 2019 season opener in Lake Charles with McNeese winning 34-28.

• In that game, the Cowboys led 34-14 with just over five minutes to play in the fourth quarter before Southern scored two TDs over the next five minutes to close the gap to 6 points.

• Southern will make a return trip to Lake Charles in 2024.

POKES VS. THE SWAC

• Saturday’s game will be the 15th meeting for the Cowboys against a member of the SWAC.

• The Cowboys have posted a perfect 14-0 mark against six SWAC teams in previous meetings.

• The last time McNeese played a SWAC member was in 2017 when the Cowboys defeated Alcorn State 34-27 in Mississippi.

• Quarterback Cody Orgeron set a new McNeese record after throwing 20 passes against LSU without a pick and increasing his consecutive streak to 159 straight passes without an interception.

• Orgeron’s streak covers the last full five games as his last interception thrown came in the final play of regulation against Lamar on March 13 this past spring.

• True freshman defensive lineman Leon Young is more than just a talented football player for the Cowboys, the product of Cedar Hills High School was a First Chair recipient in the brass section of the Longhorn Red Army Band.

• All-American edge Isaiah Chambers, first team All-SLC edge Mason Kinsey and their joining cast of Joey McNeely, Accord Green, C.J. Semien, Leon Young, Earenest Grayson and others are arguably one of the top units in all of the FCS.

• At LSU, the Cowboys recorded their first three sacks of the season, all by defensive linemen and held the Tigers to to just 2.9 yards per carry.

• Their play has lifted the DWA (Defense With Attitude) to No. 1 in the SLC and 30th in FCS in rushing defense at 106.0 yards per game.

FROM TENNIS STAR TO STELLAR QB

• Orgeron was a state champion in tennis at Mandeville HS before he started slinging the pigskin to his twin brother, Parker, their senior season.

• Cody walked on to McNeese in 2016 and was the team’s 6th-string QB that season.

• His five career 300-yard passing games is ranked 2nd all-time and needs one more to match the record of six held by James Tabary (2016-18).