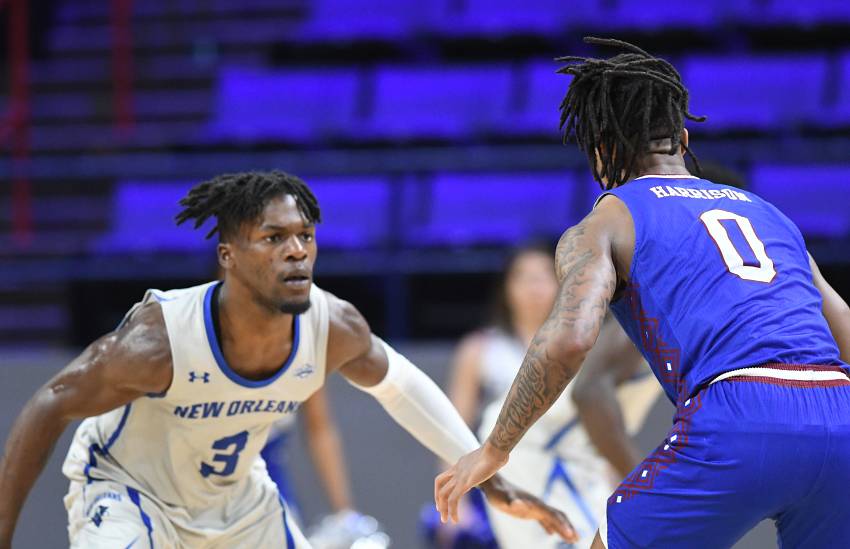 NEW ORLEANS – It was a game that went down to the last seconds and it ended as time expired when the New Orleans Privateers fell 68-66 to the Presbyterian Blue Hose on a putback before the buzzer on Thursday afternoon at the Lakefront Arena.

BUZZER BEATER
Rayshon Harrison held the ball in his hands for the last shot and pulled from three-point range. Off the miss, Brandon Younger got the offensive rebound and scored the game winner before time expired to give the Blue Hose the victory. The offensive board was the 17th recorded by Presbyterian.

In the missed 3 Pointer, Brandon Younger (@byounger_22) got a catch and shoot putback jumper AT THE BUZZER to win it for Presbyterian 68-66 over New Orleans in the UNO Classic pic.twitter.com/kFu1xaMp5L

INSIDE THE BOX SCORE
Derek St. Hilaire scored a team-best 21 points and was a perfect 8-of-8 from the free throw line. Troy Green added 17 points and four steals. Simeon Kirkland was 5-of-6 from the field in 24 minutes and scored 11 points.

For the second consecutive game, New Orleans shot over 50 percent, converting on 53.5% of their field goals.

HOW IT HAPPENED
Presbyterian slowly stretched the lead to eight points in the second half after a Trevon Reddish-Rhone layup at the 11:32 mark.

New Orleans came back to within a point at the 9:28 mark and the stage became set for a down to the wire finish. St. Hilaire stepped to the line and calmly nailed two free throws to tie the game at 66-66 with 29.9 seconds left.

The Privateers got their first five field goals from Kirkland who went for 10 first half points. It helped end a stretch of seven missed field goals that opened the game as New Orleans hung in throughout the first half.

With the score tied at 29-29, the Blue Hose drove the length of the floor in the last five seconds of the half and Rayshon Harrison hit a contested three-pointer to put Presbyterian up by three at the half.

NEXT UP
The Privateers will close out the tournament by facing VMI on Friday. Tip is slated for 1 p.m.