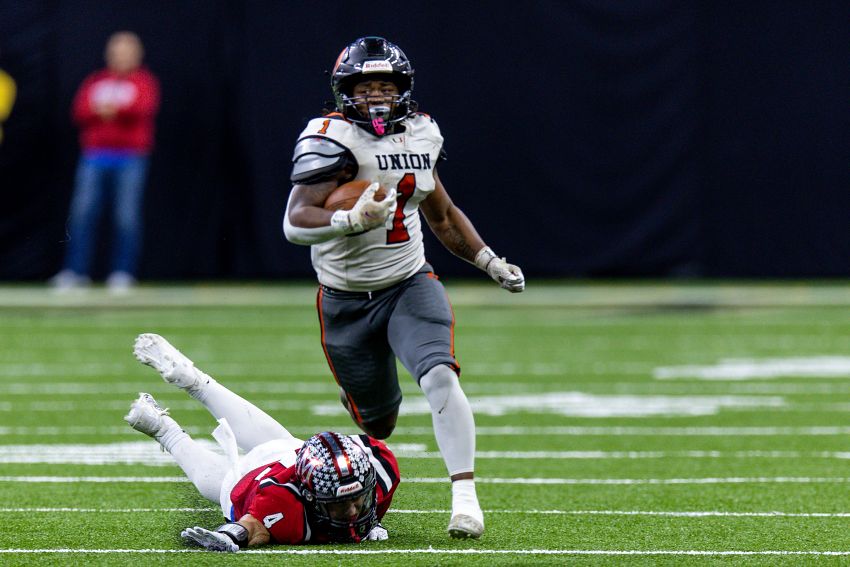 Brian Kelly and his staff parlayed an outstanding 2022 recruiting class at LSU bolstered by crafty additions through the transfer portal into a very successful 10-win inaugural campaign.

Some ask if Kelly set the bar too high for future teams? He overachieved during his rookie year in Baton Rouge, but we must recognize the way he has organized the program since the conclusion of 2022. Sure, like every program in college football, the transfer portal has eroded away at some of LSU’s roster but for every player who departed, the door swings open for a capable replacement.

LSU’s last signing class was golden, producing both starting offensive tackles – Will Campbell and Emery Jones – along with tight end Mason Taylor. It also included five-star linebacker Harold Perkins, who is already a star. Defensive end Quency Wiggins has just scratched the surface in the transition process from basketball to the football field on a full time basis. He has the ability to develop into a dominant presence along the defensive line in time.

Who will be the freshmen newcomers from the 2023 class to make the biggest splash?

Offensive lineman Lance Heard, a five-star arrival from Neville High possessing a truckload of talent and ability, also has high expectations to play a prominent role quickly. Does he replace one of the young tackles or move inside?

The 6-foot-5, 300-pound Heard has the required skill and attitude to be a compelling option who may be best suited to tackle. Some suggest that could lead to Jones moving to guard. If Heard isn’t a starter early, it will be difficult to keep him off the field for long.

Defensive end Dashawn Womack (6-5, 240) had 48 tackles (including 26 tackles for loss), 15 sacks, five pressures and five fumbles recoveries last season. He will be an early enrollee.

As an edge rusher, Womack is advanced with enough athleticism to throw his hat in the ring for playing time in 2023. When you add to the equation that B.J. Ojulari and Al Gaye left for the NFL, you have obvious vacancies. Womack is one who could make an immediate impact. He should become an integral part of the defense in short order.

Wide receiver Jalen Brown (6-1, 170), the product of Gulliver High in Miami, Florida. With 10.66 speed in the 100-meters, Brown has the skills to take the top off of a defense. The hometown Hurricanes and Michigan both made a big push to sign him but Brown had the goal to play in the SEC.

Brown has worked to become even more explosive and faster while showing potential to make contested catches as more than just a deep threat. Although possessing a slight frame, he will gain strength once he arrives on campus.

Kelly recruited Brown while at Notre Dame and LSU receivers coach Cortez Hankton handled duties trying to get him to go to Georgia while he was there.

Javien Toviano (6-0, 185) will also be an early enrollee. The coveted cornerback narrowed his finalists to LSU, Georgia, Michigan, Texas and Texas A&M after compiling 105 tackles in high school with 19 passes broken up and three interceptions, returning two for scores.

The five-star player is very muscular and changes direction flawlessly, transitioning well with receivers. Toviano comes off the backpedal easily and plays comfortably in press coverage. He may contribute on special teams.

Versatile enough to line up at corner or safety, Toviano will join a crowded position group at the former spot with veterans arriving from the transfer portal. He is good enough to assert himself as an viable option this season.

Tight end Ka’Morreun Pimpton (6-6, 237) is a great fit for LSU’s offense. You will soon discover why Tiger coaches coveted his potential. With his size, physicality and catching radius, he could have a similar impact that Mason Taylor had last season. They could play together often. The tight end spot is one that is in need of quality competition.

The fact that LSU’s running back position is somewhat unsettled will present an opportunity for Holly, who played on the Union Parish varsity team as an eighth-grader, to see the field as a true freshman.

Similar in stature and style to Clyde Edwards-Helaire, Holly has tremendous drive and balance. He hits second-gear in a hurry and excels at gaining yards after contact. He will compete during spring drills.

Whit Weeks (6-3, 215) followed his brother West, a transfer from Virginia, to LSU. Their father David was a team captain and All-SEC performer in 1995 at Georgia.

Last season as a senior, Whit totaled 104 tackles (19 tackles for loss) and two sacks with three interceptions. Very athletic, he arrives to help an area of need.

LSU hopes to lessen the blow following the loss of 2022 four-star Demario Tolan to the portal, and the younger Weeks has coverage ability that could help him see the field early. Weeks was the No. 11 rated linebacker in the 2023 class.

Ryan Yaites (6-2, 190) out of Denton, Texas will be an early enrollee. He is a good run stuffer and runs the alley with authority from the safety position. Yaites can line up at corner as well, and he should be a versatile special teamer. He has similar size and skills at this stage of two-time All-American safety Grant Delpit.

Running back Trey Holly (5-8, 190) is an early enrollee who needs not introduction in Louisiana. The Union Parish product is the all-time rushing king in Louisiana prep history with 10,523 yards along with 146 touchdowns. He has 12,600 all purpose yards and 160 total scores. Holly has excellent speed, having record a 4.4 forty-yard dash.

Shelton Sampson (6-4, 190), the big play machine our of Catholic-Baton Rouge, has all the prerequisites to work his way into the receiver rotation this season. Somewhat reminiscent of former LSU stars Michael Clayton and Terrace Marshall, Sampson is ready to see the field. He will arrive in time for spring with 4.35 speed in the forty-yard dash.

Sampson has great length as a long strider who gains separation with ease. Sampson wins the 50-50 balls, making him a superb red zone option. He uses his size and strength well as a blocker on the edge.

D.J. Chester (6-4, 335), another exciting offensive line prospect out of Conyers, Georgia., does not face major pressure to play early. I may not anticipate him wrestling away a starting spot immediately, but don’t undersell him as an early enrollee. He is versatile enough to play anywhere along the line, and his future may lie at Center.

The fifth rated player in the state of Georgia for 2023, Chester was recruited to LSU personally by offensive line coach Brad Davis.

With his size, it is no surprise Jackson runs through tackles. He is a north-south runner who can bounce outside Jackson’s burst to reach the second level in an instant helps make him a legitimate home run threat.

Aaron Anderson (5-9, 185) arrives in time for spring training. Yes, I know that he is not a 2023 signee but the former Karr star who ended up with Alabama in 2022 spent most of last season nursing an injury. Anderson should compete for playing time immediately.

Anderson is an explosive playmaker with explosive speed. While a senior at Karr in 2021, Jackson caught 74 passes for 926 yards and 16 touchdowns while returning six kicks for scores. During his career with the Cougars he returned an eye-opening 20 kicks for touchdowns.

Anyone who saw LSU’s return game in 2022 knows a talent like Anderson has a chance to make a major impact if he wins a job fielding kicks or punts. He can also turn a short pass into a long touchdown.