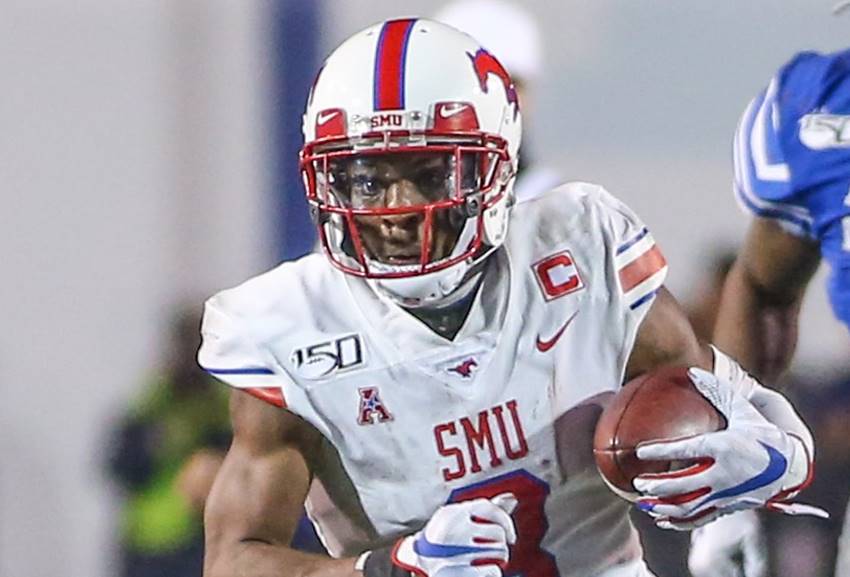 NFL free agency begins March 18th. The annual draft is three months away. A record 111 underclassmen declared early. The options to upgrade your NFL team with talent will be plentiful, if you know where to look.

I have always tried to pinpoint a few prospects this time of year who may be flying under the radar. Some overlooked players may find their way to a future Pro Bowl.

The scouting staff, along with the rest of the NFL, is well aware of these prospects. The Indianapolis Combine will commence February 23. Except for fans of the Chiefs and 49ers who square off in Super Bowl 54, others are focusing on which rookies are capable enough to come in and make an immediate impact.

Here are 20 names to consider.

The Saints are one team hoping to land a running mate for wide receiver Michael Thomas. SMU wide receiver James Proche, a 5-foot-11, 193 pounder, is a mid-to-late round round projection. He hauled in 301 career balls for 3,949 yards and 39 touchdowns. This past campaign he had 111 grabs for 1,225 yards and 15 scores. Proche is also a punt returner. He tracks the ball very well and elevates. Proche is a good back shoulder target who has great feet and body control.

Colorado’s Tony Brown (6-0, 195, 4.45) has shared the spotlight with teammate Laviska Shenault, an expected first round receiver. Brown had 51 catches for 656 yards and five scores. He wins a lot 50/50 balls and is a clutch receiver. Brown had nine catches for 150 yards and three TD’s versus Arizona State. He was a transfer from Texas Tech where he spent two seasons. Brown is a sleeper prospect with Velcro-like hands who runs good routes and thrives under pressure.

Tight end Hunter Bryant (6-2, 240) declared as a junior. He had 52 catches for 825 yards and 3 TD’s for Washington. Possessing tons of potential, the 2019 All American’s father Eric has served as a strength coach for Huskies. The youngr Bryant can split out wide as a threat but needs some work on blocking. He’d make sense as a fourth round choice.

Many mock drafts have the Saints taking a long look at the quarterbacks in the upcoming draft. The Black and Gold could spend a high draft pick or wait until the later rounds. Either way, with the uncertainty of Teddy Bridgewater, there could be a spot for a new arrival.

Chase Cookus (6-4, 205), a quarterback out of Northern Arizona, is already 23 years old. He broke school record for yards and touchdowns with 12,076 career passing yards and 105 touchdowns with only 21 interceptions. In 2019, Cookus had 4,114 yards, 31 touchdowns and seven interceptions, completing 60.3%. of his throws. Insiders compare him to Jimmy Garoppolo at the same stage of development but Cookus will be a late round choice.

Anthony Gordon (6-3, 210) ended up as the last Washington State quarterback off the assembly line of coach Mike Leach. Gordon just set the single season PAC 12 record with 5,228 yards, adding 45 touchdowns and completing 71.9% of his passes in the air Raid offense. An overachiever, Gordon did not receive a single offer following graduation from high school and only attempted five passes in 2018 serving as backup to Gardner Minshew. Gordon boasts excellent footwork, a high football IQ and a powerful arm. The ball flies off his hand. It is all about fit for Gordon in the right NFL system.

Part of a dynamic running game at Louisiana-Lafayette, offensive guard Robert Hunt (6-5, 336) has a middle round grade. His thick frame fits the NFL standard. Hunt is a good run blocker who locks onto defenders, plus he is an improved pass blocker who needs help with his footwork. The growth potential as an athlete is there, considering Hunt was an outstanding prep basketball player in Burkeville, Texas where he averaged 18.9 points and 11 rebounds.

Defensive end Alex Highsmith (6-4, 242, 4.76) was a walk-on at Charlotte who has built himself into a real feel good story. He only had offers from Davidson and Furman but the first-team All-Conference USA performer comes off of a 14 sack season in 2019. Explosive off the edge, Highsmith re-shaped his body. He bends edge as a rusher and disengages quickly. He currently has a third or fourth round projection.

Defensive end Tipa Galeai (6-5, 235) of Utah State transferred there from TCU after he was dismissed in Fort Worth for an violent altercation with a fellow student. While at Utah State, he had 10.5 sacks in 2018 and five more this past season. His relentless, hot motor makes him a great pass rusher. Similar to Saints’ undrafted free agent Carl Granderson, he could find a roll in the league.

Weakside linebacker Malik Harrison (6-3, 240) out of Ohio State entered Senior Bowl week as a potential third or fourth rounder. He can make an early mark as a special teamer. Harrison made 24.5 tackles for loss over the past two seasons for the Buckeyes.

Outside linebacker Akeem Davis-Gaither (6-2, 215, 4.55) out of Appalachian State was a two star recruit out of Thomasville, North Carolina. He had 209 tackles the past two seasons combined, with 14.5 tackles for loss and five sacks in 2019.. He had good technique, range, instincts and athleticism. Davis-Gaither covers the flats well and shows good burst to the ball. He could be a steal as a fifth rounder.

Inside linebacker Dante Olsen (6-3, 240) out of Montana had 397 career tackles including 151 stops, 11 for loss, with six sacks. Olsen reminds me of A.J. Klein. He is a first team FCS All American and Buck Buchanan Award winner (FCS defensive player of the Year). He diagnoses plays quickly thanks to a high IQ like a coach on the field. I say he’ll be a mid round steal.

Now here is my Super Sleeper, Kyle Dugger (6-2, 220) out of Lenior Rhyne. He runs a 4.41 forty with a 40″ vertical and 10’11” standing long jump. He has put 20 reps on the bench press test. He played safety in college but projects to outside linebacker. Dugger is skilled enough to serve as punt returner. He forces fumbles with his hits but he is also a reliable wrap up tackler who comes downhill a gives full effort at all times. He should test well at the NFL Combine. Dugger is currently projected as a fourth rounder.

Luke Juriga (6-4, 298), a center and guard out of Western Michigan, was a four-year starter. His father Jim was a fourth round pick by the Denver Broncos in 1986 and made 42 pro starts including Super Bowl XXIV played in New Orleans. Tough as nails who never missed snaps due to injury, Juriga’s technique is already at a high level. He was on Outland and Rimington watch lists.

Tanner Muse (6-1, 225), safety from Clemson, was a 2019 Jim Thorpe semifinalist and recorded 65 tackles with five interceptions this past season. He can blitz off the edge as an added threat. Muse understands secondary coverage details and has a knack for big plays thanks to lots of film study and taking great angles to the ball. He is a late round projection who may wind up at outside linebacker.

Jaron Bryant (6-1, 185), cornerback from Fresno State, made 178 career tackles with six interceptions. He challenges the run. Bryant is an outstanding special teamer who blocks kicks including two vs. Idaho.

Defensive end Ron’dell Carter (6-3, 270) out of James Madison made 59 tackles with 25.5 for loss and 11.5 sacks this past season. He overpowers blockers. A transfer from Rutgers in 2017, Carter has a hot motor and can run. the Buck Buchanan finalist projects as a late rounder.

Shyheim Carter (6-0, 195), a cornerback out of Alabama who runs a sub-4.5 forty brings talent and experience to the next level. He played in 49 career games with 22 starts for the Crimson Tide and developed into a good slot cover. The former Kentwood Kangaroo was a four-year prep starter and Class 1A state MVP. He projects as a third or fourth round pick.

Cameron Dantzler (6-2, 185) arrived at Mississippi State as a three-star prospect out of St. Thomas Aquinas in Hammond. The lanky cornerback should be an early second day pick in draft although I have seen him even projected in the first round. The early entry junior made 107 tackles with five interceptions in 2019. He rarely allows completions, even limiting Biletnikoff winner Ja’Marr Chase this past season. Dantzler has elite athleticism and all the skills to be a lockdown, physical cover man.

16 additional players who have graduated also eligible for selection

The National Football League announced today the names of 99 players who have been granted special eligibility for the 2020 NFL Draft and 16 players who have fulfilled their degree requirements with college football eligibility remaining and are also eligible for selection in the April 23-25 draft in Las Vegas.

The following 16 players have in timely fashion under NFL rules officially notified the league office that they have fulfilled their degree requirements. Consequently, they are eligible for selection:

Each of the 99 players listed below have met the league’s three-year eligibility rule and have renounced their college football eligibility by submitting written notification to the league office on or before the January 17 deadline. Consequently, they are eligible for selection:

The number of players granted special eligibility for the NFL Draft the past 10 years: