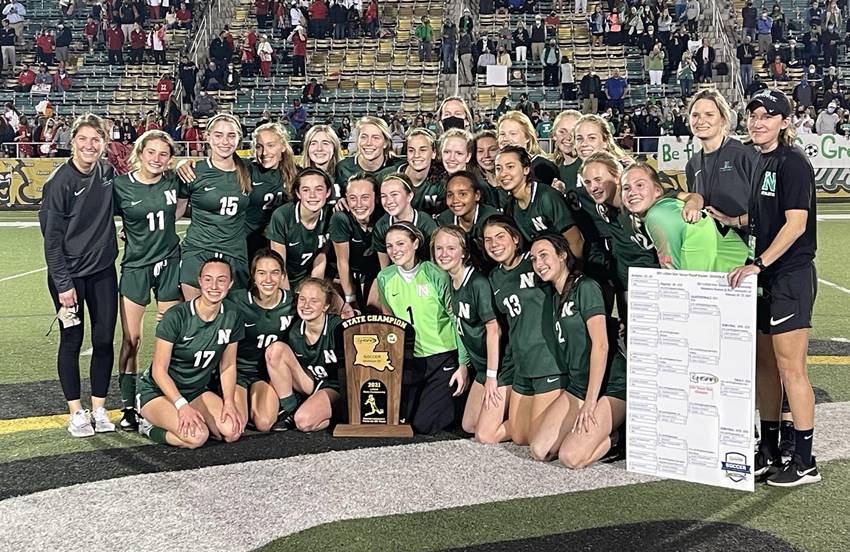 Fans at Strawberry Stadium were treated to a pair of matches worthy of state title rewards to start the LHSAA soccer finals.

No. 6 Episcopal came into the Division I boys state soccer title game determined to make scoring as hard as possible for No. 1 Pope John Paul.

However, the Jaguars found the net twice and held off the Knights for a 2-1 victory Wednesday night in Hammond.

The Knights played nine behind the ball with only one forward determined to slow down Pope John Paul’s fast and deadly attack.  In the first half. The plan worked as Episcopal (15-7-4) frustrated the Jaguars.

Pope John Paul head coach Danny Clavier noted that halftime that they knew that the moment had gotten the best of his team and that they needed to settle down and play their game.

They did just that.

The second half saw Pope John Paul (18-4-2) turned up the heat substantially.  Lincoln Oertling, the game MVP along with Michael Uwaifo and Jack Everard put shots on target but Knights goalie John Wilson was up to the task.

The pressure finally yielded results 22 minutes into the half. Michael Tymkiw found a loose ball on the top of the box and drilled a laser beam over Wilson’s head into the goal to make it 1-0.

Now desperate to equalize, Episcopal took their keeper Josh Wilson out of the game and put him on the top to play as a third forward. However, in the process of change, Pope’s Shawn Riviere was able to score during the confusion to double the advantage.

At that point with Wilson added the attack, things looked different for the Knights but it proved just a bit too late. Four minutes later, a deflected Knights free kick was directed into the bet by Garret Reimann to draw Episcopal within a goal.
The Knights kept on pressing but Pope held firm to the final whistle.

Clavier’s Jaguars, a squad he has steadily built for years, can finally enjoy being on top of the mountain.

Meanwhile, in the DIV girls final featued two teams with players that really knew each other well.Tendencies, touch, intensity – all of that was of high quality.

No. 10 Academy of Sacred Heart (11-9-1) did not look like a 10 seed whatsoever, determined to play No. 1 Isidore Newman in an attacking manner. On the other hand, the Greenies have been in the finals year after year, fully comfortable with the pressure.

The result was a scoreless match decided 5-4 in penalty kicks to give Newman their fifth state title on the past six years.

Both teams made their first three kicks from the spot. Then a goalie that had silently been doing a great job, Marianne Villere, had her chance to stamp her mark on the game.   ASH sent Sacred Heart’s Katie Gardes to kick. Villere, before the ball was shot, moved a few feet to her left and the ball went right to her.

Villere said, “I read the other player’s eyes beforehand.” That gave Newman the advantage.

Anne Chawla put a hard shot on target, and Bonura, named the game’s MVP, made the save!  Then Bonura was the next kicker.  She shot the ball right at Villere.

After that, Nina LeBourgeois drilled a shot in for the sudden death win.

“I told my team that the pressure was on them (ASH), so just do their best,” Newman head coach Heather Fitzgerald said.

The first 20 minutes of the contest were a matter of the two teams testing each other. The game was called tight by the officials, resulting in a multitude of free kicks that did not amount to much.

Senior Victoria Thomas for Newman (11-4-3) started roaming the field, switching the point of attack and starting to put heat on the Cardinals.  Up to the challenge was Catherine Bonura, Sacred Heart’s keeper.

Halftime came and went, setting up a match that appeared to be one that would be lost by the team that made the first mistake.  That mistake, however, was not going to happen.

Both teams played fast and furious, and both had chances.  What put the game into overtime was an open Thomas getting a chance to score in the box only to be denied by Bonura who stopped the shot, but without catching it.  Thomas, on the ground, tried to put it in, and Bonura, also on the ground, was able to collect the ball.  No foul was called.  That was fitting because both players were giving their all.

In overtime, Gardes shot a ball from 30 yards out and hit the top crossbar!  Thomas then went to work and gave the Greenies three chances to score only to be frustrated by Bonura.

Earlier in the day, the girls Division III title match features No. 1 Loyola Prep facing No. 2 University High at 4:30 p.m.