Hurst replaces Brett Stewart who is taking a job outside of coaching. 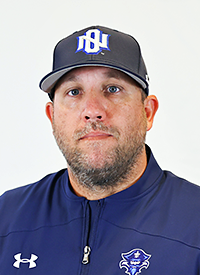 In his previous stop, Hurst was working in the same role at Faulkner University. He helped the Eagles to a 134-50 record and two NAIA World Series appearances in 2021 and 2022. In both seasons, Faulkner finished in the top five in the nation in the final NAIA poll.

“The thing that people will realize about Phillip is he works hard,” said Head Coach Blake Dean. “He works the phones, he’s relentless and he puts in a lot of time in recruiting. He’s been successful at multiple stops and I think it’s an easy transition. We brought him in originally to help Coach Stewart in the fall so when he left, I thought it was an easy move especially in the middle of the year.”

He was named the ALBCA Assistant Coach of the Year in 2021. Hurst’s pitching staffs recorded 974 strikeouts in 879 innings from 2021-22. He also coached Antonio Frias who was named NAIA Pitcher of the Year after recording a 13-0 record with a 2.22 ERA, a .159 opponent batting average and 138 strikeouts. Frias also threw a no-hitter that season against William Carey.

“I’ve watched the success from afar this program has had under Coach Dean and I knew I was coming to a winning culture,” said Hurst. “The way they treat the kids and the community, it was going to be the right fit for me. There’s a lot of good baseball players that come from Louisiana and I’m looking forward to getting to know this area better.”

Prior to that, Hurst was in the same position at Wallace CC. The team recorded a 169-60 record and in 2017, helped guide Wallace to their first JUCO World Series in school history. He coached three JUCO All-Americans and 58 players were sent to four-year schools from 2016-19. 39 of those players went to Division I schools.

Hurst got his coaching start at Suwanee High School in 2011-12 where he was an assistant. He helped Suwanee to a 42-10 record and a district title. He also coached travel ball for FTB and 5-Star National.