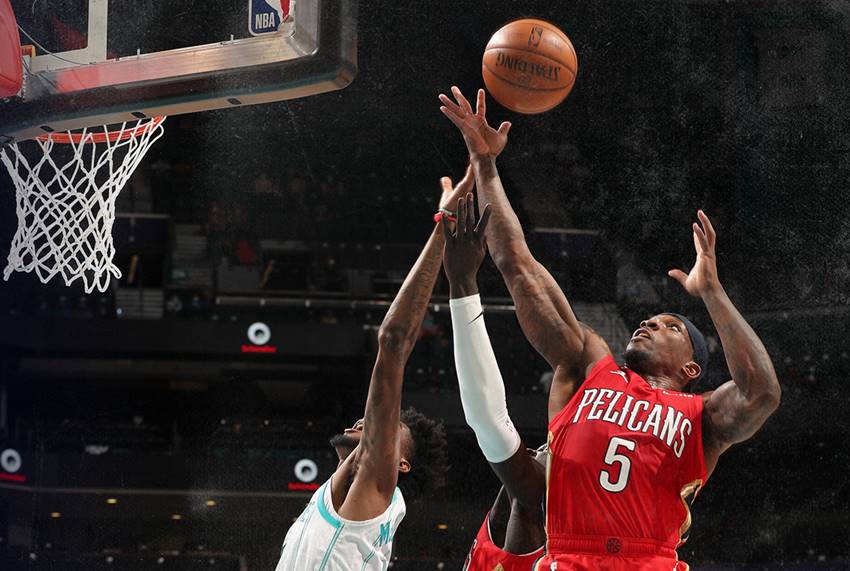 There is no mistaking that the New Orleans Pelicans have been a poor defensive team all season long.

Without its two stars, as well as its starting center and top reserve, the undermanned Pelicans nearly won at Philadelphia against the top team in the Eastern Conference, largely because the Pelicans defended hard and defended well.

With those stars still out, the Pelicans won at Charlotte 112-110 Sunday night to keep their playoff hopes alive, largely because the Pelicans defended hard and defended well.

Defense is an attitude.

It has been a pleasure to watch the Pelicans play the last two games due to the hard-nosed attitude on the defensive end.

That defense was spearheaded by Jaxson Hayes.

After scoring a season high 19 points at Philadelphia, Hayes, who is growing up before our eyes, was a dominant force off the bench with 18 points, eight rebounds but perhaps, most importantly, a career high six blocks.

It makes a huge difference when you are trying to defend a driving player and you know Hayes is there to have your back.

That was the case Sunday night.

New Orleans won with its defense, holding the Hornets to 21 points in the final 16 minutes of the game, including just 14 in the fourth quarter.

The Pelicans overcame lousy free throw shooting. New Orleans was a miserable 10-of-22 (42.9%) from the line. Otherwise, the Pelicans may have won in fairly comfortable fashion.

Charlotte responded with a 9-0 run, taking advantage of a pair of Pelican turnovers, to cut the deficit to 15-14.

Nickeil Alexander-Walker entered the game for the first time with 3:29 to play in the first quarter, making his first appearance since April 4, missing 18 games with a high ankle sprain.

The first quarter was all about Eric Bledsoe and the center position for the Pelicans.

Bledsoe scored 13 points with four assists and two rebounds in the quarter while Billy Hernangomez had six points, eight rebounds and a block and Jaxson Hayes had five points, a rebound and a block.

In the second quarter, Bledsoe sat until the 3:49 mark and by the time he returned, the Pelicans were down 56-47, minus 18 points without Bledsoe.

New Orleans was terrible in the second quarter and got embarrassed as Charlotte outscored the Pelicans 42-23. Thankfully, the Pelicans closed the quarter on a 5-0 run, thanks to a fortunate three-pointer by James Johnson that banked in and a turnover, resulting in two free throws by Hernangomez and Charlotte led 67-57 at halftime.

Terry Rozier torched New Orleans for 24 points in the half, including 18 in the second quarter, while LaMelo Ball scored 14 as his brother, Lonzo, struggled with just three points.

The Hornets opened the second half with two turnovers.

Early in the fourth quarter, Wes Iwundu picked up his second technical foul and he was ejected.

Behind a spirited effort to Hayes, New Orleans stormed back to take a 104-100 lead.

Clinging to a 109-107 lead following a couple of empty offensive possessions,

Hayes hit a jump hook with 12.7 seconds left in the game to seal the deal.

Bledsoe finished with 24 points and 11 assists. It was the fourth double-double of the season for Bledsoe, who added four rebounds.

In a starting role, James Johnson did a solid job with 17 points, eight rebounds and three steals while Naji Marshall, getting another start, had 13 points. Hernangomez had nine points and 16 rebounds.

Lonzo Ball had 12 points and six assists and was overshadowed by younger and more talented brother LaMelo, who had 22 points, five assists, four rebounds and two steals.

With four games remaining in the season, the Pelicans play the second of a back-to-back against Memphis, a team New Orleans has dominated over the last two seasons.

With four games remaining, the Pelicans are 1 ½ games behind the Spurs for the final playoff spot in the Western Conference. San Antonio hosts Milwaukee Monday night.

Hope is still alive, thanks to a team short on talent but long on attitude, something we wished we had seen earlier in the season. Hungry players are playing hungry and on Mother’s Day, those players ate heartily and took the sting out of the Hornets.