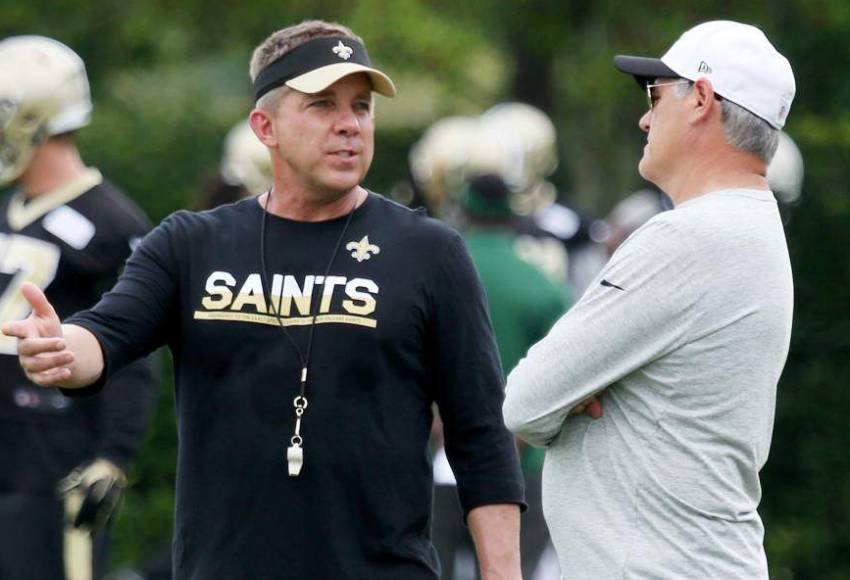 The highly successful duo of Sean Payton as head coach and Mickey Loomis as general manager, among other titles, has been together since 2006.

Counting the tumultuous 2012 season in which Payton was suspended for the entire year and Loomis for part of the year, the pair is about to enter its 16th NFL Draft and 16th season together in 2021.

With a large sample size, it is easy to determine what Payton and Loomis value most.

When looking at the first round and early round picks (rounds 1-3), make sure you take a close, make that a very close look at linemen on both sides of the football and defensive backs.

To say that the Saints have built their four straight division titles, their three NFC Championship game appearances and one Super Bowl victory and 10 playoff appearances with Payton and Loomis by building inside out and with players who can defend the pass would be accurate.

On the current Saints team, all five offensive line starters were New Orleans draft picks and all were in the top three rounds, including first-round picks in Andrus Peat, Ryan Ramczyk and Cesar Ruiz.

Two of the four defensive line starters were first-round picks, including Cameron Jordan and Marcus Davenport.

Two of the four starting defensive backs were first-round picks in Marshon Lattimore and Malcolm Jenkins.

In the first draft of the Payton-Loomis era in 2006, Reggie Bush fell to the Saints with the second overall pick and the temptation to pick the electric running back was too large. He turned out to be a good player for the Saints and was later inducted into the Saints Hall of Fame.

New Orleans did invest in its secondary by choosing Roman Harper in the second round, who will be inducted into the Saints Hall of Fame later this year. The Saints stole an offensive lineman in Jahri Evans in round four.

In 2007, the Saints went with wide receiver Robert Meachem, who turned out to be a solid, serviceable player but not a star.

They did take a defensive back in Usama Young in the third round, along with guard Andy Alleman.

In 2008, New Orleans went with defensive tackle Sedrick Ellis in the first round and cornerback Tracy Porter in the second round. Carl Nicks, an eventual Saints Hall of Fame inductee, was a great pick in round five.

In 2009, the first-round choice was Jenkins, who is still playing and back with the Saints. Surprising many, New Orleans invested in a punter with Thomas Morstead’s selection in the fifth-round, which turned out to be a terrific pick.

In 2010, the Saints went with cornerback Patrick Robinson in the first round, who is still playing and back with the Saints, while tackle Charles Brown was the pick in the second round. Jimmy Graham, who became the best receiving tight end in the league with New Orleans, was a tremendous pick in the third round.

In 2011, defensive end Jordan was the initial first-round pick and he is still a star while Mark Ingram got the nod later in the first round. Linebacker Martez Wilson and defensive back Johnny Patrick were third-round picks.

In 2012, the Saints were without their picks in the first two rounds and went with defensive lineman Akiem Hicks in round three, a good player who has blossomed away from New Orleans.

In 2013, the Saints tabbed safety Kenny Vaccaro in the first round before getting a steal with tackle Terron Armstead in round three, who remains a stalwart for the team. They also went with John Jenkins, a defensive tackle in round three.

In 2014, the pick was Brandin Cooks in round one but defensive back Stanley Jean-Baptiste was the second round choice.

In 2015, Peat was the initial first-round pick and he is still playing and starting at guard. Linebacker Stephone Anthony also went to the Saints in round one. Linebacker Hau’oli Kikaha was the second round choice while quarterback Garrett Grayson and cornerback P.J. Williams were the third round selections. Williams is still playing for the Saints. Either Williams or Robinson could start at corner this season.

In 2016, defensive tackle Sheldon Rankins came to New Orleans in the opening round while the second round picks were Michael Thomas, one of the best picks in franchise history, along with safety Vonn Bell. New Orleans stole defensive tackle David Onyemata in the fourth round.

In 2017, New Orleans hit the jackpot in the first round with Lattimore and Ramczyk. Safety Marcus Williams arrived in the second round and all are standouts for the Saints. The third round picks were not too bad, either, in Alvin Kamara, Alex Anzalone and Trey Hendrickson.

In 2018, Davenport was the first-round choice with wide receiver Tre’Quan Smith arriving in the third round. Both are starters.

In 2019, without a first-round pick, the Saints went with center Erik McCoy in round two and he is a solid starter.

In 2020, Ruiz was the first-round choice and he is a starter while linebacker Zack Baun and tight end Adam Trautman came in the third round. Trautman is poised to start this season.

For those advocating the selection of a quarterback, consider the history under Payton and Loomis in that regard.

Yes, the ominous, dominating presence of Drew Brees clearly steered the Saints away from investing at the most important position through the draft.

The only quarterbacks drafted under Payton and Loomis were Sean Canfield, in the seventh round, in 2010, and Garrett Grayson, in the third round, in 2015.

If you want to count Tommy Stevens in 2020 (seventh round), feel free to do so but he was not drafted as a quarterback.

If you do not have secondary members who can cover good receivers, you are in trouble.

With the subtraction of Janoris Jenkins and a possible suspension looming for Lattimore, there has to be concern in that area entering the draft for Payton and Loomis.

That is why widespread mock drafts have the Saints taking a cornerback in the first round at No. 28 or even trading up to get one.

Up front, defensive tackle is certainly a need after the departure of Rankins and Malcom Brown.

While the areas of need are clear, the extensive history of drafts under Payton and Loomis points toward a cover corner or a big man on defense being the immediate priority.

The level of those picks gives New Orleans a chance to address needs.

Now, if Payton and Loomis can come close to or replicate the 2017 draft, the New Orleans Saints will be in a reloading, rather than a rebuilding mode.

The flip side is also true, which is avoiding coming close to or replicating the 2014 draft of Cooks, along with Jean-Baptiste, and forgettable names like Khari Fortt, Vinnie Sunseri, Ronald Powell and Tavon Rooks.

Now, pardoning the pun in advance, let’s see if Payton and Loomis can cover themselves by going big in the draft.