The brilliant coaching career of Paul Mainieri in college baseball is over and the torch at LSU has been passed to Jay Johnson.

Speaking with me Wednesday night on All Access on 106.1 FM, Mainieri reflected on his time with the Tigers, good and bad moments, untimely injuries to pitching and his successor.

“It’s been a very unusual time for me personally in my life,” Mainieri said. “I’ve been a coach for four decades. To not be a coach any longer is certainly a very strange thing for me, just to wake up in the morning and not have an office to go to or have a team to go coach. It’s taking a little bit of time to adjust to this. I don’t think I’ve quite made the adjustment yet. It’s kind of an emotional time.”

Mainieri talked about when he made the decision to retire.

“I really had been thinking about it for several months,” Mainieri said. “I think in my mind, I probably made the decision a couple of weeks before the end of the season. It may have been when we were at Texas A&M. The last person trying to jump on board with it was my wife, Karen. She really thought I would regret the decision. I finally sat down and talked to her and came to the final decision.”

The national championship of 2009 was the greatest achievement and memory for Mainieri but there were so many others as well.

“We had so many wonderful moments throughout the years, even when we didn’t win the national championship,” Mainieri said. 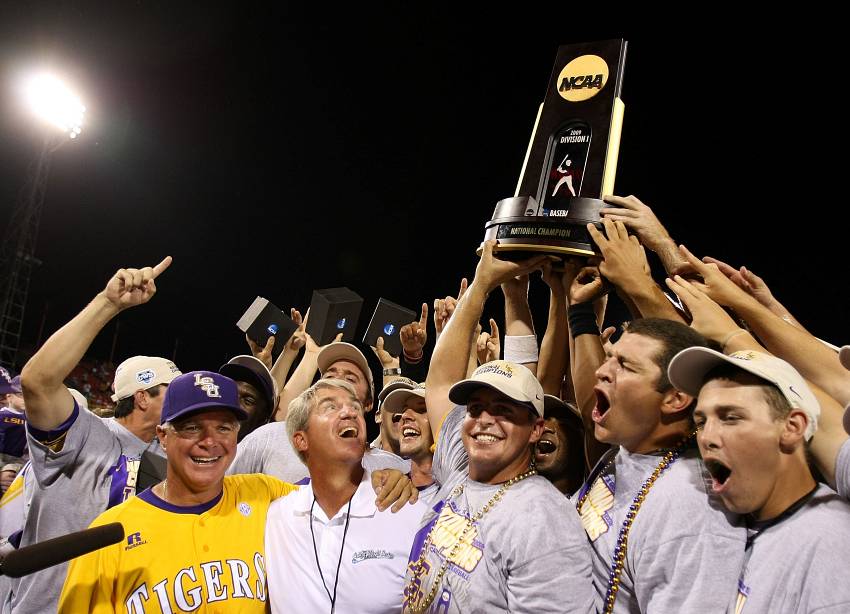 The home losses to Stony Brook and Coastal Carolina in the NCAA tournament were painful, though both proved to better teams than LSU those years. Mainieri cited one specific loss that he felt was the worst.

“Probably the most disappointing loss that we had was in 2013 in game one of the College World Series to UCLA,” Mainieri said. “We lost 2-1. That was probably the best team that I ever had.

“We went to Omaha and we were 57-9 and we had Aaron Nola on the mound. We hit four balls that night that I thought were home runs in any park we played in all year except for TD Ameritrade Park. Had we won that game, I think we would have gone through the World Series and won it.”

One of the biggest issues with LSU in recent years has been several injuries to key pitchers which hurt the Tigers, without one primary reason to pinpoint for the annual problem.

“If I had the answer to that (injuries), I’d have a lot money,” Mainieri said. “I don’t think anybody really knows the true answer as to why pitchers get hurt or to why there’s an epidemic of it. Are kids throwing too much that the soft tissue in their elbows and shoulders can’t handle it? I don’t know that the doctors have the answers. Sometimes, it’s just bad luck.”

Mainieri cited a perfect example of the impact of injuries.

“We were going to start two freshmen in Cole Henry and Landon Marceaux against Florida State in the Super Regional but Henry took himself out injured in the second inning,” Mainieri said. “We had to go to our bullpen and we ended up losing. A bad break here or there and things turn in the wrong direction.”

What condition does Mainieri feel he is leaving the program in?

Mainieri feels there is some good pitching returning as well.

“From a pitching standpoint, you can’t help but be excited about what Javen Coleman did, Garrett Edwards, Ty Floyd,” Mainieri said. “Some of these guys I think have a chance to be really outstanding. There’s a chance Devin Fontenot & Ma’Khail Hilliard will come back. We have a great recruiting class that’s coming in. Some will make an immediate impact and Jay will add to it.”

“No question about it,” Mainieri said. “I’m really excited about Brayden. I’m sad that I won’t be able to coach him. I think he’ll be an impact player right away. The kid can really hit.”

Mainieri stated the obvious about the SEC.

“This year, I thought the SEC was the best it’s ever been,” Mainieri said. Florida built a new stadium. Mississippi State has done what they have done. Texas A&M is putting money into it’s stadium. Ole Miss has done that. It is an amazing league from top to bottom. It’s what I came here for. If you want to be the best, you’ve got to compete against and beat the best.”

Did Mainieri know Johnson at all before he arrived in Baton Rouge?

“I really didn’t know him that well at all before he got the job,” Mainieri said. “Jay’s got a really good mind, he knows what he’s doing and he’s an outstanding coach. I don’t see any reason they can’t have an outstanding ballclub next year and compete for championships. I really like the way he carries himself. I spent six hours with him last Sunday. We spoke about a whole range of things.”

Mainieri feels Johnson is poised to have great success in Baton Rouge.

Does Mainieri have any advice to Johnson about handling the enormous expectations of fans, along with the pressure and criticism Johnson is sure to endure in Baton Rouge?

“I would give him the same advice my father gave me,” Mainieri said. “The only person that you can ever worry about satisfying is the person that you look at in the mirror when you’re brushing your teeth and that’s yourself. You hold yourself to a high standard and you be honest with yourself that you know you’re doing the very best that you can. That’s all you can do.

Mainieri maintained that you must believe in yourself and must stick to your philosophy in trying times to weather the storm.

Mainieri will remain with the LSU program as an ambassador, along with former gymnastics coach D-D Breaux. I basically will be on call in any way he needs me. I probably will give a lot speeches and eat a lot of lunches. I’m looking forward to helping in any way I can. I will be willing and able to continue to help make LSU great.”

As we spoke, Mississippi State was in the process of beating Vanderbilt in the third and deciding game of the College World Series in Omaha. Despite his awareness of it transpiring, Mainieri avoided it like the plague.
“I have no desire to watch that game tonight,” Mainieri laughed.

In summation, Mainieri exuded the kind of class he displayed throughout his coaching stay at LSU and in his press conference exit.