Orgeron thriving at LSU while SEC brethren in Mississippi struggle 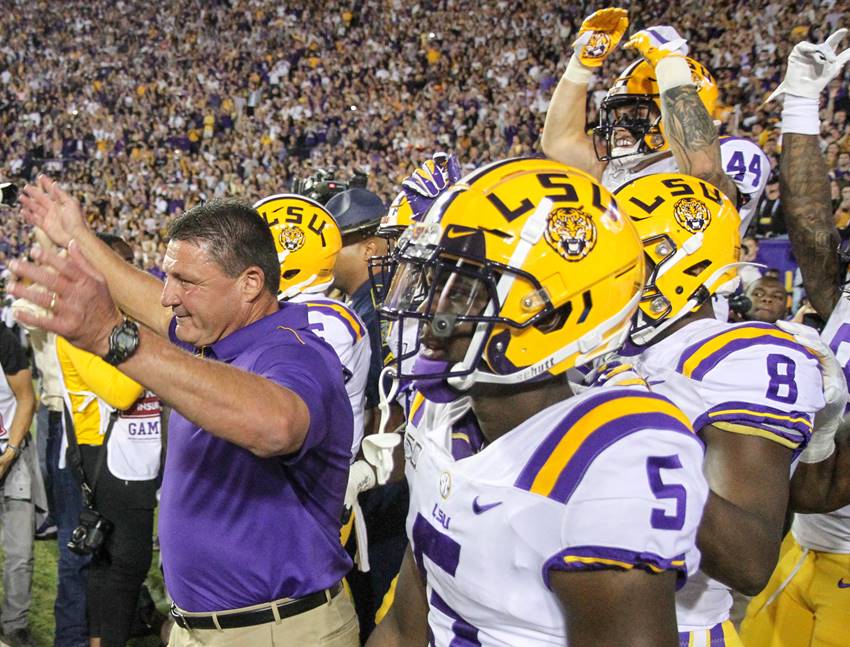 When LSU gave its football job to Ed Orgeron permanently, there were several chuckles in the college game, many of them coming from the nearby state of Mississippi.

The prevailing wisdom, using that term quite loosely, is that Orgeron was over his skis. That somehow LSU had given one of the top jobs in the Southeastern Conference to a coach who had proven that he was not head coach material.

Jog ahead almost three years and that wisdom has been turned on its head.

As LSU travels Saturday to Mississippi State as almost a three touchdown favorite, the heat is clearly on Bulldogs head coach Joe Moorhead one week after his team was tamed by Tennessee, 20-10.

Moorhead is now rumored to have interest in being the head coach at Rutgers. After a season and a half in the cauldron that is the SEC West, coach Joe has been, well, humbled.

“Coaching in the SEC for about a year and a half now, has been a humbling experience,” said Moorhead. “I don’t think you get to this point where I am without a certain level of success and confidence, but this game and the SEC, it has a way of keeping you honest.”

Up in Oxford, Ole Miss coach Matt Luke has a 3-4 squad. His Rebels still have to play Texas A&M, Auburn, and LSU.

The coach of the Tigers, who supposedly wasn’t head coach material, has made progress each and every season in Baton Rouge.

This season, the LSU offense, one that leads the nation in scoring at 52.5 points a game, is the talk of college football.

The Florida/LSU game was ESPN’s most watched game in two seasons. My guess is, thousands tuned in to see if the LSU offense was the real thing.

Despite possessing the ball for only 21:41, LSU had 511 total yards, or 24 yards per minute. All questions were answered.

The ultimate judge of Orgeron’s supposed head coaching prowess will on the second Saturday of November in Tuscaloosa.

However, he has already proven his ability to attract good coaches, delegate and change. The move to the spread offense has for LSU been a game changer.

In the coming weeks, the head coaches at the two Mississippi school in the SEC West are about to learn just that.

It is very difficult to win in the SEC if your address is either Starkville or Oxford.

In Baton Rouge, not so much.

Just ask the current coach of the Tigers.