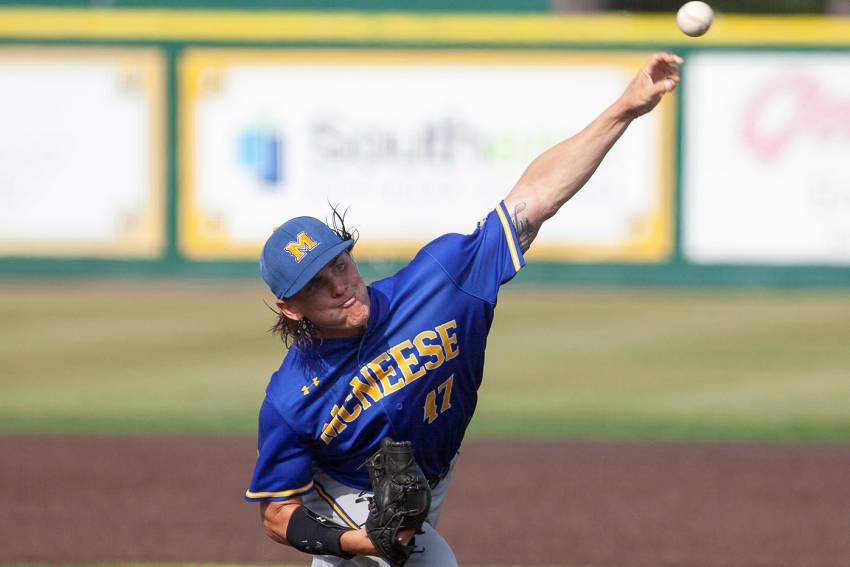 FORT WORTH, Texas — Will Dion broke the 31-year-old McNeese single season strike out record of 116 set by Terry Burrows in 1990 with eight here Saturday in a 10-5 loss to Oregon State that eliminated the Cowboys from the NCAA Tournament.

“It’s been a rough year for all of us and Lake Charles,” said McNeese head coach Justin Hill. “I’m proud of this team for not giving up at any point during the year. It’s a miracle we even made it this far let alone we were even able to play this season. It isn’t the way we wanted it to end and I definitely will remember this team for what they had to endure both on and off the field.”

Dion entered the game needing four strikeouts for the record and he reached the mark in the fifth inning by striking out the first two batters he faced. He ends the season with 121.

Like Friday night’s game against TCU, the Cowboys (32-30) took an early 2-0 lead by scoring single runs in the second and third innings.

The Beavers (35-23) bats came alive in the fourth inning when they scored five runs on five hits including a bases clearing double to left center by Kyle Dernedde to put the Beavers up 5-2. Prior to the fourth inning, Dion had allowed only one baserunner.

McNeese responded with two runs in the bottom of the fifth inning on a two RBI single up the middle by Dickerson to trim the lead to 5-4 then tied it at five apiece in the seventh when Dickerson singled in Fisbeck from second on a single to right field.

The senior from Beaumont, Texas ended his career by leading McNeese at the plate with two hits, three RBI, and scored one run.

McNeese gave up another five runs on four hits along with one error in the eight-inning that included another bases clearing double by Dernedde to essentially put the game away.

Dernedde ended the game going 2 for 3, both hits being doubles along with six RBI.

Cameron Foster fell to 1-5 on the year with the loss. Foster gave up three earned runs on two hits, allowed one walk in the three batters he faced.

Oregon State’s reliever Chase Watkins improved to 3-4 on the year with the win. Watkins allowed only one hit, one unearned run and struck out three in 3.0 innings.

GAME NOTES
B2- Dickerson drew a walk, stole second and scored on a RBI single through the right side by Julian Gonzales (McN 1, OS 0)
B3- McNeese took a 2-0 lead on a single through the left side by Nate Fisbeck that scored Harden. Harden reached on a walk, stole second and went to third on a wild pitch
T4- Oregon State scored five runs including a bases clearing double to left center by Kyle Dernedde to take a 5-2 lead.
T5- Will Dion struck out the first two batters he faced to break the 31-year-old single season record of 116 held by Terry Burrows. Dion then struck out Garret Forrester for the third out.
B5- A two RBI single up the middle by Dickerson cut the Oregon State lead to 5-4. The Cowboys left the tying run stranded on third after a strikeout ends the inning
B7- McNeese tied the game at five apiece on a RBI single to right field by Dickerson that scored Fisbeck from second
T8- Oregon State responded with five runs in the 8th to retake the lead (10-5)