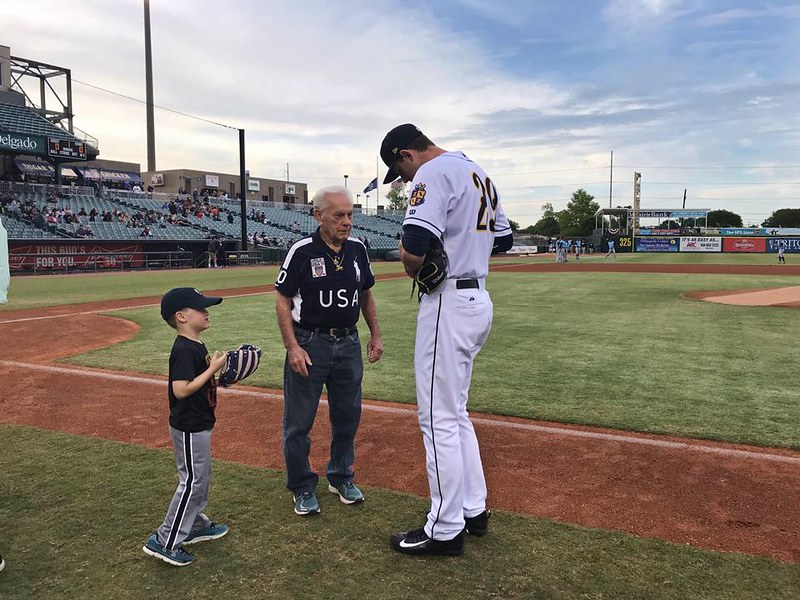 Marrero native Nolan Vicknair grew up wanting to play professional baseball.  He got there, although it was an abbreviated career consisting of only two partial seasons in the 1940’s.  Almost seventy years later, the 93-year-old got one more chance to get out on the diamond.  The occasion wasn’t to suit up to play this time, but to be honored by New Orleans Baby Cakes fans on Friday’s Military Awareness Night for the ‘Cakes’ game against Colorado Springs at The Shrine on Airline.

Vicknair received a warm applause from the Baby Cakes crowd of 6,356 fans as he threw out the first pitch to ‘Cakes player Joe Gunkel before the game.

Not too many people still living can say they’ve met some of baseball’s most renowned personalities such as Branch Rickey, Mel Ott, and Carl Hubbell, all members of the National Baseball Hall of Fame.  As an aspiring professional ballplayer, Vicknair had the good fortune to cross paths with each of these legends.

His pro baseball story started out as intriguing, but would ultimately end in disappointment for him.

In an early 1940’s, American Legion game in New Orleans in which he pitched during high school, St. Louis Cardinals general manager Branch Rickey was in attendance scouting another player, when he noticed Vicknair’s athleticism.  According to Vicknair, after the game Rickey told him, “Kid, you have talent.  After you finish high school, you should consider playing baseball.”  That comment fueled Vicknair’s desire to pursue a baseball career.

But Vicknair had to put his career dream on hold as a 17-year-old, when he enlisted in the U. S. Navy during World War II.  After serving nearly three years, including a stint on the USS Bearrs fighting the Japanese in the Pacific, Vicknair returned home to hopefully pick up where he left off.

Even though the local New Orleans Pelicans professional team had already expressed interest in Vicknair as a pitcher, his former high school principal introduced him to Gretna-native Mel Ott, who was then winding down his illustrious Hall of Fame career as a player and manager with the New York Giants.  Preferring the opportunity to play as an everyday player, Vicknair acted on the advice of Ott, who recommended he report to the Giants’ training camp in Fort Smith, Arkansas, in 1946.

Vicknair secured a roster spot as an outfielder with Oshkosh, the Giants’ Class D affiliate in the Wisconsin State League.  His speed, both as an aggressive base-runner and as a fielder, was at the core of his game, while his diminutive size limited his power at the plate.  Newspaper accounts from the time described Vicknair as a popular player.  However, he suffered a leg infection from being spiked and a serious broken jaw in another base-running incident that significantly affected his playing time.  Altogether, he played 45 games for Oshkosh in 1946, batting only .193.

In 1947, Vicknair reported to the Giants’ spring training camp in New Jersey.  He recalls collecting his weekly paychecks from Carl Hubbell, the former Giants pitching star who was then the farm director for the organization.  The Giants wanted Vicknair to return to Class D to start the season, but he became frustrated with that situation, since many of his former Oshkosh teammates were being advanced to the next level.  Vicknair requested and received his release from the Giants, whereupon he returned to New Orleans to seek playing opportunities.

He signed with Class D New Iberia of the Evangeline League, where he already knew other players from the New Orleans area.  But after 11 games, he was released when the team replaced its manager and the new skipper did not favor him.

Vicknair says he missed opportunities to fully develop as a player since his military service occurred during an age when he would have normally been honing his baseball skills.  The injuries in Oshkosh set him back as well.  Although disheartened with the outcome of his pro career, he nevertheless cherishes the memories from the experience.

However, not being able to maintain his professional career didn’t deter Vicknair from continuing to actively play the game he grew up with.  He played for and managed teams in several semi-pro leagues which were very popular in New Orleans in the late 1940s and 1950s.  He also competed on multiple city-wide softball championship teams with one of his employers, Avondale Shipyards.  A 1963 Times-Picayune article reported he pitched the first no-hit, no-run game in the league’s history.

Always a well-conditioned athlete, Vicknair continued to play competitive softball until he was 60 years old.  He was one of the original members of the New Orleans Diamond Club, a fraternity of former professional ballplayers who met regularly and occasionally played old-timers’ games.

Vicknair is one of over 450 players from the New Orleans area who have played professional baseball over the years.  However, only about 20% of them ultimately made it to the major-league level.  To view an extensive list of New Orleans area high school players who went on to play at the college level, be drafted by a pro team, and play professionally, follow the link http://www.thetenthinning.com/articles.html.