NEW ORLEANS – It was certainly strange.

While we have seen the New Orleans Saints playing before very small crowds this season, it was a first to see just a smattering of fans on hand for the annual Allstate Sugar Bowl Friday night.

A year ago, Clemson rallied to beat Ohio State 29-23 in the national semifinal in the Fiesta Bowl at Glendale, Arizona. It was a game that the Buckeyes feel they should have won.

Ohio State led that game 16-0 and the Buckeyes were dominating. They took their foot off the pedal and paid the price. A couple of questionable calls did not help the OSU cause.

Justin Fields threw a costly interception in the end zone to end a late threat on a miscommunication with wide receiver Chris Olave.

Some, including Clemson coach Dabo Swinney, did not think the Buckeyes belonged in the playoffs.

Clemson came in allowing less than 18 points per game.

Ohio State would obliterate that statistic.

Ohio State was missing a starting offensive lineman and a couple of other players. The Buckeyes did not have nearly as many practices with everyone available as Clemson.

As for the Tigers, they returned to the scene of the crime, where the Tigers lost to the LSU Tigers in the national championship game a year ago.

This time, Clemson was not facing a largely hostile crowd.

This time, Clemson suffered the same fate as a year ago.

Next time, Clemson would probably like to play a playoff game somewhere other than the Superdome, its veritable House of Horrors, where the Tigers are now 0-3 in playoff games.

In three College Football Playoff games in the Superdome, Clemson has been outscored 115-59.

The last time Clemson won a game in New Orleans, in the Superdome, was on Sept. 12, 1981, when Danny Ford’s Tigers downed Vince Gibson’s Tulane Green Wave 13-5. Clemson went on to win the national championship that season, going 12-0, and Tulane gave them quite a scare. If the Green Wave had better quarterback play that day in a game that I covered, they could have pulled the upset.

Ohio State won the toss and deferred, giving the Tigers the ball first.

Offensive Coordinator Tony Elliott, who calls plays, had to miss the game for Clemson after testing positive for COVID-19.

That certainly did not help Clemson.

Clemson promptly drove 82 yards in eight plays, scoring on a 2-yard run by Trevor Lawrence who got to the right pylon just ahead of two defenders pursuing him and the Tigers took a 7-0 lead with 12:10 to play in the opening quarter.

Ohio State answered to tie the game with 7:59 to play in the first quarter.

First, Justin Fields hit Trey Sermon for 34 yards and on the next play, Sermon ran left and sprinted untouched into the end zone to make it 7-7 with 7:59 to play in the opening quarter. The drive took just three plays to go 77 yards, taking just 1:12 to get it done.

The touchdown run was well blocked and Clemson defenders were out of position and outmanned at the point of attack.

The Tigers responded immediately, driving 75 yards in seven plays with Travis Etienne of Jennings scoring on a 3-yard run to make it 14-7 with 5:01 to play in the half.

Ohio State came right back to tie it on an 8-yard touchdown pass from Fields to Luke Farrell to make it 14-14 with 1:36 to play in the quarter.

The big play was a 46-yard completion from Fields to Garrett Wilson to the Clemson 8-yard line. Wilson was well behind the nearest defender on the play. The drive covered 75 yards in six plays, taking 3:25 off the clock.

Clemson had 167 yards in the opening quarter to 165 for Ohio State.

Ohio State got a needed stop and then the Buckeyes took their first lead at 21-14 with 10:35 to play in the first half, driving 84 yards in nine plays. Fields hit a wide open, uncovered Jeremy Ruckert and the tight end virtually walked into the end zone from 17 yards out for the score.

Then, it got worse for Clemson.

For the second straight year, linebacker and defensive signal-caller James Skalski got ejected for targeting, this time in the second quarter, when he lowered the crown of his helmet and drilled Fields, who was shaken up.

You may recall that Skalski was ejected for targeting Justin Jefferson in the national championship game last season with 5:13 to play in the third quarter.

Someone ought to consider teaching Skalski how to hit or tackle by the rules of the current game.

To be clear, I hate the rule to eject a player from the game.

I would be in favor of a penalty on the first and an ejection on a second such offense.

That said, it is hard to play defense in this day and age of protecting offensive players.

Fields left for one play and returned.

When Fields returned, he hit Chris Olave on a 9-yard touchdown pass to give Ohio State a 28-14 lead with 5:12 to play in the half, completing a nine play, 75-yard drive.

Fields was still hurting when he left the field after the touchdown, grabbing his side, but he stayed in the game.

Left guard Harry Miller missed the game for Ohio State and was replaced by Dawand Jones.

Then, Jones was injured in the second quarter and Paris Johnson Jr. had to come in. Truly, the Buckeyes exhibited great depth.

Clemson defensive end K.J. Henry went down late in the second quarter, limping badly off the field. He was able to return to the game later.

Fields then guided the Buckeyes on a 12 play, 80-yard drive, scoring on a 12-yard touchdown pass from Fields to Ruckert to make it 35-14 with 11 seconds left in the half.

Fields finished the first half 16-of-18 for 223 yards and four touchdowns and rushed seven times for 50 yards.

Ohio State finished with 394 yards in the first half.

Secondary star Nolan Turner returned for Clemson in the second half after missing the first half for a targeting call in the ACC championship game against Notre Dame.

Ohio State took the second half kickoff and promptly drove from its own 25-yard line to the Clemson 12-yard line.

Then, Fields, under some pressure, made a bad decision, throwing into three orange jerseys in the end zone. The ball may have been tipped but either way, it was a bad decision and Mike Jones Jr. picked if off for a touchback.

Cornerback Mario Goodrich left the game injured in the third quarter for Clemson.

The Tigers turned the turnover into a touchdown, driving 80 yards in nine plays with Lawrence hitting Cornell Powell on a 10-yard touchdown pass to make it 35-21 with 7:56 to play in the third quarter.

Then, Fields stopped the Clemson momentum, connecting with Olave on a 56-yard touchdown pass to make it 42-21 with 4:55 to play in the third quarter.

All-American guard Wyatt Davis went down for Ohio State on the play.

Then, with Clemson driving, Lawrence was hit, fumbled and Haskell Garrett recovered at the Clemson 43-yard line.

Early in the fourth quarter, Ohio State put the game away as Fields hit Jameson Williams on a 45-yard touchdown pass to make it 49-21 with 14:03 to play in the game.

Sevyn Banks put the game away with an interception of Lawrence in the end zone with 1:30 to play in the game.

Fields finished 22-of-38 for 385 yards and six touchdowns with one interception and Fields rushed eight times for 42 yards.

Fields showed toughness to overcome the injury suffered in the first half.

Going into the game, many projections had dropped him to the third rated quarterback in the upcoming NFL Draft behind Lawrence and Zach Wilson of BYU. One has to wonder what those analysts will think after watching this performance?

Sermon did his best Zeke Elliott impersonation, rushing 30 times for 191 yards and a touchdown and was bullish all night.

Lawrence, clearly expected to go No. 1 in the NFL Draft to Jacksonville, completed 33-of-48 for 400 yards with two touchdowns and an interception. He also lost a pair of fumbles.

For the second straight year, Brett Venables saw his defense shredded in a playoff game after getting torched by LSU a year ago.

Ohio State won the first college playoff national championship in 2015, whipping Oregon 42-20. The Buckeyes will return to the title game for the first time since then.

The last meeting between Ohio State and Alabama was on Jan. 1, 2015 when the Buckeyes outscored the Crimson Tide 42-35 in the Allstate Sugar Bowl national semifinal game, setting up the title game with Oregon.

Alabama is 3-1 all-time against the Buckeyes, who rarely match up. The Crimson Tide will make their fifth appearance in six years in the national championship contest.

Alabama has won 15 national championships and claims two others.

These are the ultimate blue-blood programs in the sport.

Clemson (10-2) has been in four of the last five national championship games but not this time.

Yes, Ohio State was missing some players but did the Buckeyes really belong in a national semifinal contest?

The Buckeyes had played just five games before the Big 10 decided to violate its own self-imposed rule and allowed Ohio State to play for a conference championships despite not playing six regular season games, which was the unanimous decision of conference members prior to the start of the season.

It turned out to be a great decision by the Big Ten, and Ohio State was determined to exact revenge on Clemson in a very well prepared and extremely well executed manner.

Dabo Swinney ranked Ohio State 11th with his vote in the coaches poll. Though it was downplayed, you can bet the Buckeyes used that as motivation, along with the difficult loss in last year’s semifinals.

Since the beginning of the college football playoffs, 11 of 14 semifinal games have been decided by double figures. Is this system working or should it be revisited?

As for Notre Dame, the Fighting Irish have put up little or no fight in the most important games over the last 23 seasons.

This time, the Irish lost 31-14 to Alabama and it really was not that close as Notre Dame got a very late score for a back door cover of the point spread, for what that is worth.

The Irish have not only lost, they have lost with style, by at least 14 points in each of those defeats and have been outscored by 161 points, losing each game by an average of 23 points.

While Ohio State made its case, Notre Dame, once again, did not show that it belonged in the playoffs.

Then again, who else deserved to be there?

Cincinnati, given a real chance to make its case, failed against a Georgia team with five players missing, who opted out. The Bearcats are good but not quite good enough, though defensive coordinator Marcus Freeman has a bright future which could possibly take him to Baton Rouge.

Perhaps Texas A&M will show that it belonged in the playoffs when it battles North Carolina in the Orange Bowl Saturday evening.

After all, the Aggies lost only to Alabama during the regular season.

As for what happened here in the Superdome Friday night and in Arlington, if Ohio State plays the way it played tonight, we will see an outstanding national championship game in Miami.

Meanwhile, thanks and congratulations to all involved with the Allstate Sugar Bowl for seeing the game through in a very difficult year and circumstances, with so much of a financial loss due to not having fans in the stands.

The Sugar Bowl remains a crown jewel in the Greater New Orleans area. 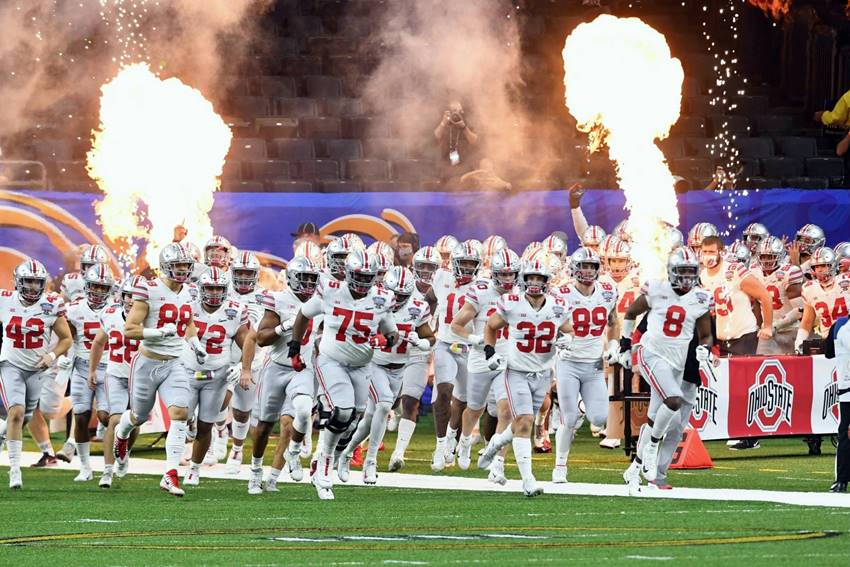 Sugar Bowl was still the Sugar Bowl despite COVID effects

The Allstate Sugar Bowl was being played inside the Mercedes-Benz Superdome – just like always. But of course, the atmosphere was quite different than the past.