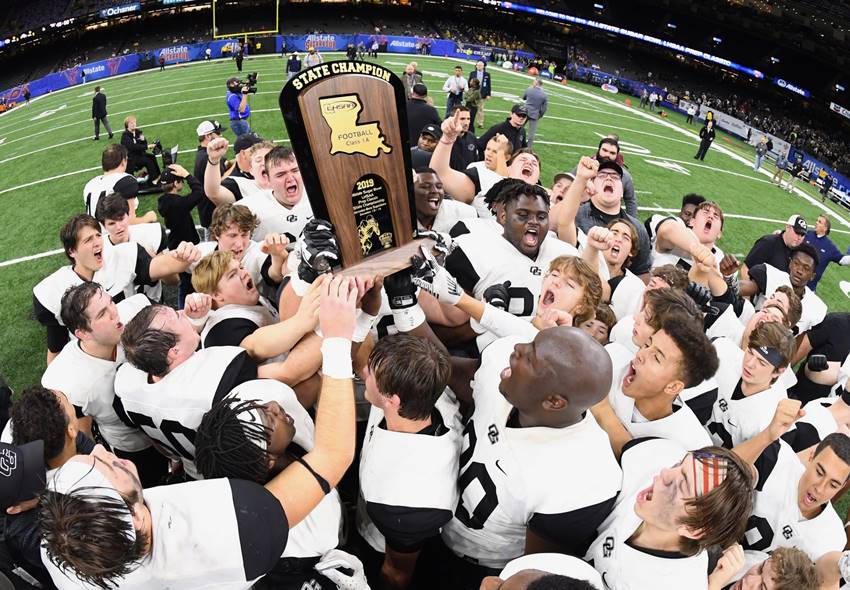 NEW ORLEANS – The Oak Grove Tigers avenged their runner-up finish a year ago in the Allstate Sugar Bowl LHSAA Prep Classic, roaring to a 55-12 victory over the White Castle Bulldogs for the school’s first state championship since 2001.

“What a complete effort.  I thought the last six weeks of football was as consistent an effort as we’ve played.  I felt after last year we had a great chance to come back to the Dome,” said Oak Grove Head Coach Ryan Gregory on the team’s first state championship in 18 years. “I feel like the weight of the world is off my shoulders.  I’m proud of our tradition, but we felt like we want to create our own.”

One year after finishing runner-up in the LHSAA Class 1A State Championship, the Tigers made it very clear right out of the gate that things would be different the second time around.  Oak Grove recovered a fumble on the opening kickoff of the game, giving them the ball at the White Castle 15-yard line.  Two plays later, Ron Craten punched it in for a 7-0 lead with 11:19 to play in the 1st quarter and Oak Grove would never look back.

Oak Grove’s size and depth proved to be just as much of a mismatch on the field as it appeared on paper.  The Tigers ground and pound attack, with the assistance of five turnovers by the Bulldogs, dominated time of possession and wore down the White Castle defense and imposed their will throughout the game.  The Tigers racked up 290 yards rushing on 56 carries, while also adding 86 more yards through the air on 4-of-9 passing.

“We knew how much speed they have.  We’re fortunate to have some bigger guys, but watching White Castle on film, we knew we could use the size to our advantage,” said Gregory on Oak Grove’s size advantage. “But we also wanted to show that we have some speed of our own.”

The offensive success equated to a better than 2:1 ratio of time of possession for the Tigers, as they maintained possession for 32:38 to White Castle’s 15:22.

The Oak Grove (11-3) ground attack was anchored by Craten, who earned Most Valuable Player for the Tigers, as he led the team with 159 yards rushing on 23 carries and two touchdowns.  Tailback Otis Moore also got in on the action, tallying 63 yards rushing on 12 carries and two touchdowns.  Additionally, Quarterback Braden Sullivan executed numerous play action fakes to scamper for 59 yards on the ground on 10 carries for a touchdown.  Sullivan also added 86 yards through the air and a touchdown.

While sustained offensive success eluded White Castle (9-4) throughout the game, running back Marcus Williams was the lone bright spot accounting for all of the Bulldogs offense and scoring in the second quarter. The Most Valuable Player for the Bulldogs finished with 177 yards rushing on just 10 carries with two touchdowns.

Williams would be the only offense White Castle mustered in the contest though.  The Bulldogs finished the game with only 208 yards rushing as a team and a paltry eight yards passing.

Quarterback Javier Batiste struggled to find open receivers throughout the contest, forcing low percentage throwing attempts that resulted in only 3 completions in 11 attempts with two interceptions.

Leading 7-0, Otis Moore intercepted Batiste at the Tigers’ 11-yard line for the second turnover of the game and ending White Castle’s scoring threat.  Oak Grove then marched 89 yards on 12 carries, punching it from one yard out on Craten’s second rushing TD of the game to take a 14-0 lead with 3:39 to play in the first quarter.

Two plays later, Trey Allen intercepted Batiste for the third turnover of the game, setting up Oak Grove at the White Castle 19-yard line.  Four plays later, Moore easily ran it into the endzone to extend the Oak Grove lead to 21-0 with 1:20 to play in the first quarter.

White Castle would finally get on the board early in the second quarter when Williams broke free on first down for a 60-yard touchdown run, cutting the Oak Grove lead to 21-6 with 10:23 to play in the 2nd quarter.  Oak Grove would respond with another signature drive, as the Tigers mounted a ten play 72-yard drive, capped off by a seven-yard touchdown run by Moore to extend the lead to 28-6 with 5:12 to play in the second quarter.

The Tigers would extend lead on the ensuing drive when Alex Brown’s pass on a trick play for the Bulldogs was tipped by multiple defenders and ultimately intercepted by defensive tackle Bert Hale and returned 46 yards for the touchdown, giving Oak Grove a 34-6 lead with 2:50 to play in the half.

Williams again would answer for the Bulldogs with another quick score, breaking free for a 65-yard run for his second touchdown to cut the lead to 34-12 with 2:34 to play in the half.

However, the scoring would come to an end the rest of the night for White Castle after that.  Oak Grove added a 48-yard touchdown pass from Sullivan to Bud Holloway before halftime to extend the lead out to 41-12 with 1:19 to play.

Two more rushing touchdowns by Oak Grove in the second half by Ty Porter and Sullivan would bring the score to its final tally of 55-12.