Notebook: Putting a wrap on the 2020 NFL Draft

With the 2020 NFL Draft now done, we have much on which to reflect.

Here are the topics of great interest:

There was only one running back chosen in the first round and that was the final pick of the round when Super Bowl champion Kansas City chose former LSU and Catholic High star Clyde Edwards-Helaire.

Not surprisingly, the SEC led all conferences with 63 players chosen, one short of the all-time record set in 2018 by, you guessed it, the SEC. There were 40 SEC players taken in the first three rounds.

It was not even close.

The next conference in terms of players selected this year was the Big 10, with 48 players drafted. Then came the Pac 12 with 32 players picked. The only school in the SEC with a player not drafted was Ole Miss.

Of course, LSU had a record setting draft, with 14 players chosen. That equaled the record of 14 Ohio State players picked in the 2004 draft. A total of 10 Tigers went in the first three rounds.

Michigan and Ohio State each had 10 players chosen, tying for second. Alabama was next with nine players selected. Clemson, Florida, Georgia and Utah each had seven players picked.

Those picks further illustrate that is all about recruiting, that you win with talent, based on the seasons all of those teams had in 2019.

While the quantity was not there, the quality was there for the Saints with their first three picks. The move to trade a future draft pick for Tommy Stevens was the only questionable move.

Carolina had seven draft picks and used all of them on defensive players. While Teddy Bridgewater may not have gotten any weapons, he got help with possibly getting more snaps and possessions.

Another surprise included New England not selecting a quarterback so Jarrett Stidham and Brian Hoyer will compete for the starting job with a pair of undrafted free agents.

In what everyone knew was a terrific class of wide receivers, eight receivers were chosen in the first 35 picks in the draft. The Raiders and Eagles invested heavily in receivers with three each and the Broncos drafted a pair of receivers.

While wide receiver was a popular choice, there were 39 linebackers chosen, the most of any position.

Blake Ferguson of LSU earned the distinction of being the only long snapper chosen in the draft. There were two punters chosen and three kickers selected.

There was real balance with 124 offensive players picked and 125 defense players chosen.

Many felt the Raiders reached more than once and came up short, while most did not like the draft of the Packers, including the peculiar pick of Jordan Love in the first round on a team that lacked receiving weapons for a still gifted Aaron Rodgers.

A number of reviews felt Philadelphia did not draft well, that the Eagles reached in the first round with wide receiver Jaelen Reagor and made an unnecessary pick with Jalen Hurts in the second round. Houston did not appear to get much help, outside of Ross Blacklock.

The Bears were criticized on many fronts for drafting a tight end first in Cole Kmet, despite having just invested in Jimmy Graham and with nine other tight ends on the roster.

In terms of state products, Texas led the way with seven players from Texas high schools chosen in the first round with Florida second with four selections. Louisiana had three picks in the opening round. 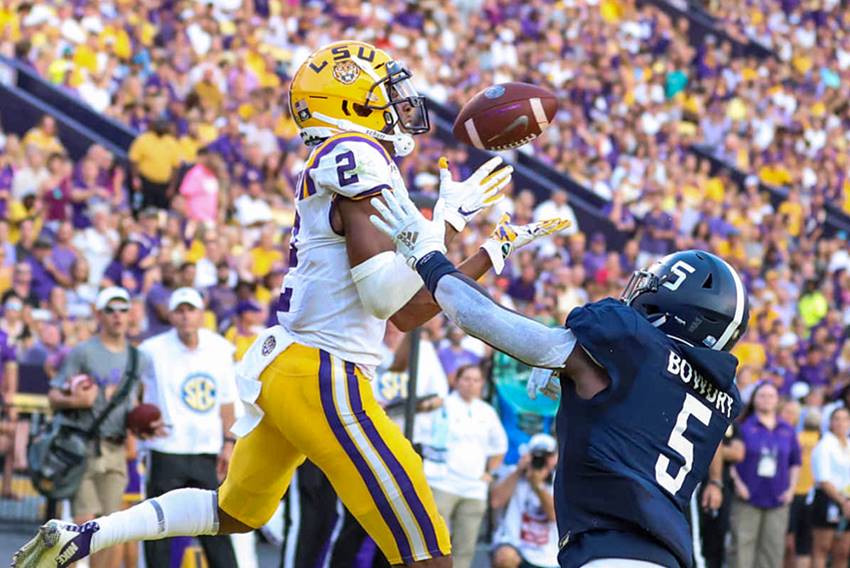 According to national college football writer Bryan Fischer, Louisiana ranked fifth among states in players drafted, behind only Texas (34), California (24), Georgia (21) and Florida (18).

There were 21 players drafted from Louisiana universities.

The Ragin’ Cajuns had three players chosen in Robert Hunt, Dotson and Calais.

Burrow is the first player from Ohio to be chosen first overall in the draft since Orlando Pace went first overall to the Rams in 1997.

The biggest state in the country, California, had just one product chosen in the first round and that was Jordan Love of Liberty High in Bakersfield, picked by the Packers.

Following the draft, the five teams whom I now view as contenders to reach the Super Bowl in 2020 include San Francisco (favorite), New Orleans, Dallas, Minnesota and Tampa Bay in the NFC. In the AFC, those teams are Baltimore (favorite), Kansas City, Buffalo, Tennessee and Seattle.

Looking ahead, the favorite to be the No. 1 overall pick in the 2021 draft, at this point, is Clemson quarterback Trevor Lawrence.

Others who should be in the mix are Ohio State quarterback Justin Fields is next on the list while others include Miami quarterback D’Eriq King, linebacker Micah Persons of Penn State, tackle Penei Sewell of Oregon, Travis Etienne of Clemson, quarterback Jamie Newman of Georgia and tackle Alex Leatherwood of Alabama. Do not discount Ja’Marr Chase of LSU.