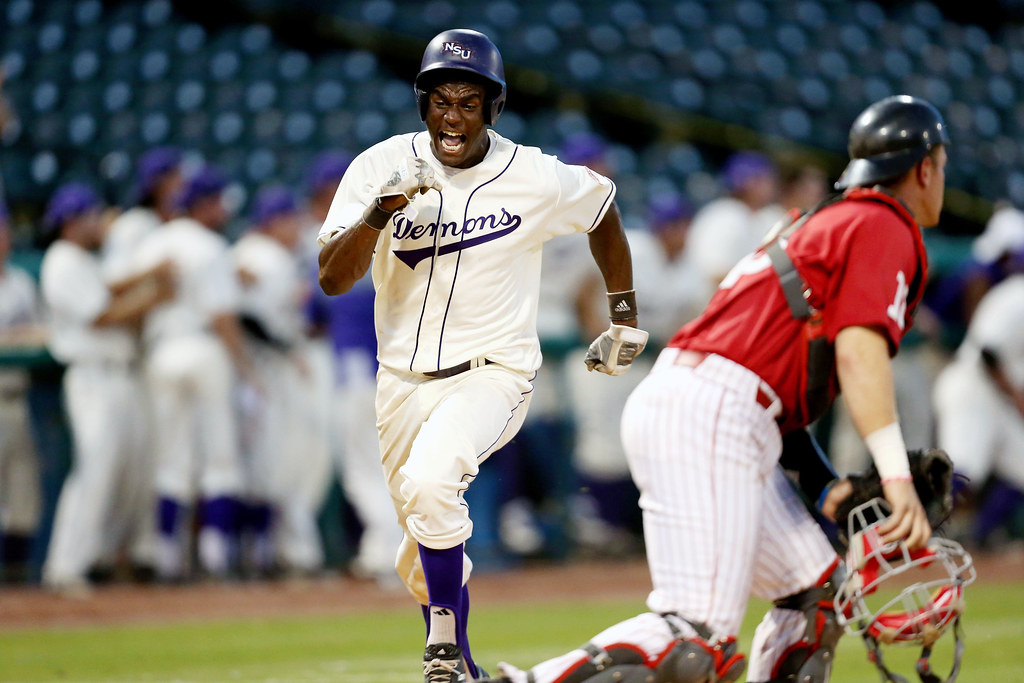 SUGAR LAND, Texas – Staring down a one-run deficit at the bottom of the eighth inning, No. 3 Northwestern State plated two runs to edge No. 7 Nicholls 3-2 and punch the Demons’ ticket to Saturday’s championship game.

NSU awaits the winner of No. 4 Houston Baptist and No. 8 New Orleans. Should the Huskies prevail tonight, the two will rematch tomorrow at 1 p.m. CT with the winner advancing to face the Demons at 6 p.m.

Northwestern State struck first as two straight walks from Nicholls pitcher Parker White put runners on first and second, followed by an RBI to left field from J.P. Lagreco to score the first run of the game for a 1-0 Demons lead.

After two scoreless innings, the Colonels responded in the top of the fourth with a Xane Washington RBI double down the left field line, sending Lee Clark to the plate to tie the game 1-1.

With the two sides still deadlocked, White made way for right-hander Christian Bahlinger on the mound at the bottom of the seventh. White finished his day with 6.2 innings pitched, three strikeouts and three hits allowed. He allowed one earned run on 91 total pitches.

The Demons would get two runners on base with two outs but left them stranded on a fly out to right field to send the teams to the final two innings tied 1-1.

Winners over Southeastern in an elimination game earlier Friday, Nicholls came out firing in the top of the eighth and had runners on first and third following a Brady Bell double and Joey Morales single to right field. It was then a patch of dark clouds descended on Constellation Field and forced a weather delay with one out in the inning and 6:58 p.m. on the clock.

The game resumed just after 8 p.m. with lefty Reed Michel taking over on the mound for Nathan Jones. A wild pitch on Michel’s first throw advanced Morales to second, after which Chet Niehaus stepped up and singled, making his way to second on the throw, scoring Bell and putting Morales on third to take a 2-1 lead. Lee Clark was up to the plate next, but with a full count and a runner on third, he struck out swinging.

Nicholls made a pitching change of their own for the bottom of the ninth, bringing on left-hander Alex Ernestine. With one out on the board and Kwan Adkins on first, David Fry tripled to center field to tie the game 2-2. With the go-ahead run on third, Tyler Smith notched an RBI single down the middle, paving the way for Fry to score and give Northwestern State the lead back, still with just one out.

The Colonels again made a change atop the mound, bringing on right-hander Cayden Hatcher. Smith stole second and L. Watson was hit by a pitch to put runners on first and third with two outs. A fly out to right field would end the eighth, and the Colonels would head to the top of the ninth facing a 3-2 deficit and needing a victory to force a rematch for a championship game spot.

Jose Vasquez came to the mound for the final Demons’ inning, with Xane Washington up to bat for Nicholls. Washington struck out swinging on a full count. Nathan Tribble then followed suit as Gage Teer came to bat, staring down elimination. Teer struck out looking on a 1-2 count to seal the defeat, sending Northwestern State to the championship game.