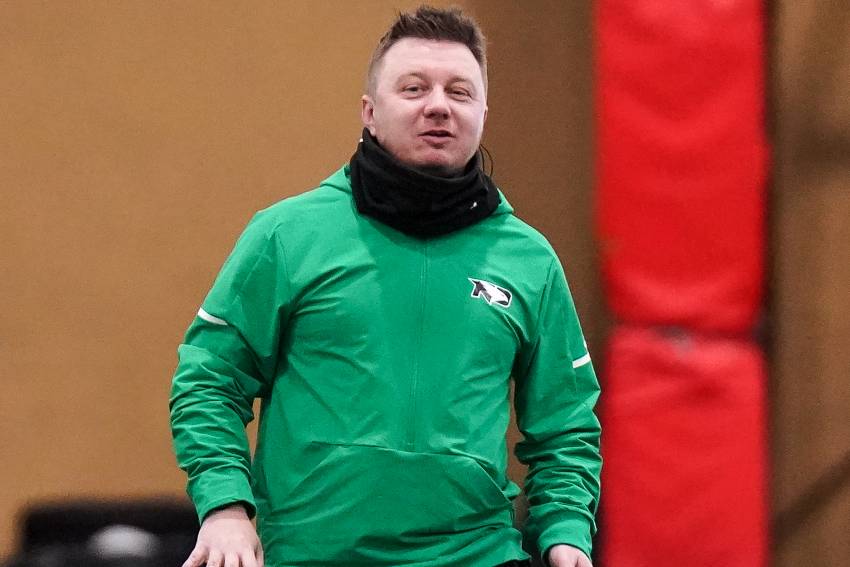 The hire must be approved by the Louisiana Board of Supervisors, of which NSU is a member, as well as pass through other University human resource processes.

“It is exciting to have a national coach of the year, with a national championship on his resume, leading an NSU soccer program which has repositioned itself over the past few seasons with a high level of success,” Burke said. “Stu’s background, from competing and coaching on the professional level to coaching at different levels collegiately, will benefit our team on all levels of the game – physically, mentally and strategically.

“His ability to relate to the players while still motivating them will create a solid environment of competitiveness and camaraderie within the program. While the timeline from now to preseason practice is short, Stu’s experience has prepared him to expedite the necessary details which will make the transition as seamless as possible.”

The native Englander built Northwestern Ohio from the ground level, but he said the Lady Demons track record of success along with its cadre of returning players was attractive.

“This is a great chance to take over a program that’s had success over the past couple of years and build on that,” Gore said. “These girls have gone from one end of the Southland Conference to the other in a positive way, but what struck me most is that they weren’t content with that.

“They want to win trophies and be the top dog in the conference, and that’s just fine with me. Pair that with meeting great people from the administration like Greg Burke and Dr. Haley Taitano to other coaches and a fantastic search committee that was super invested — it’s a great opportunity for me.”

Gore had immediate success at Northwestern Ohio, going 15-5-1 in his first season while guiding the Racers to the national championship game in just his second season, which started the string of four straight Final Fours.

With four of five All-Southland Conference players returning as well as eight of nine Lady Demons who scored a point during the 2021 spring season, NSU should be in the mix for a conference title.

“The three cornerstones of our athletic department align perfectly with what Stuart Gore is all about – academic achievement, personal responsibility and competitive success,” said Taitano, NSU’s deputy athletics director and senior women’s administrator. “We can’t wait to get him here and continue building upon an already solid soccer program packed full of talented, hard-working young women who are eager to win championships and excel on and off the field.”

The Lady Demons finished second and a tie for second in the SLC standings in the past two seasons, advancing to the 2019 SLC Tournament Championship game under co-head coaches Jess and Anna Jobe.

Jess Jobe accepted the men’s head coaching position at Dallas Baptist, where he had previously served as a women’s soccer assistant.

Returners include SLC Goalkeeper of the Year Acelya Aydogmus and two-time SLC Defender of the Year Nicole Henry from a defense that ranked eighth nationally with a .41 goals against average. Henry also was picked to the United Soccer Coaches All-Midwest Region Team twice.

Gore has spent the past three seasons as NCAA Division I associate head coach, spending two campaigns at James Madison after being a finalist for its head coaching vacancy and this past season at North Dakota.

“Being in the head coaching role is familiar to me, and getting back to the role and putting my blueprint on things is super exciting,” Gore said. “But NSU is a program where you don’t have to reinvent the wheel.

“We’ll improve on things where we think we can, but I’m not coming down and trying to change massive amounts of things. We’ll try to tweak things to get to the next level.”

He was the head coach of the Women’s Professional Soccer League’s Philadelphia Fever for a season after spending three years on the Washington United Club and helping the Philadelphia Independence transition to professional soccer.

As a player, he competed for two seasons with UD Lorca of the Spanish Second Division after a college career at Division II Montevallo.

WHAT THEY ARE SAYING ABOUT STUART GORE:

“Coach Gore had a huge impact on our team. He would take time to sit down with us for as long as was needed to help us improve. He taught us how to better play the game. You can call any of my JMU teammates and you will hear the same thing.”

“You can’t go wrong hiring Stu. He’s a really good coach. He has a great balance, knowing when to demand more of a player and when to offer encouragement. He is very pragmatic and flexible.”

“Stu knows the game inside and out. He just has an innate knowledge of the game. He also has a special knack for developing relationships with this era of student-athletes. The team always believed in his practice and game strategy.”

“Stuart is incredible. He has won a national championship as a head coach, possesses recruiting connections that have resulted in his programs obtaining Division I All-Americans, cares greatly about his athletes, and places great emphasis on academic success. He has the second-highest coaching license in the world, and from working with him, it is obvious why as he’s simply a fantastic coach.”

“Stu is a very good coach. He will make the program relevant. He is a pure-bred soccer guy.”