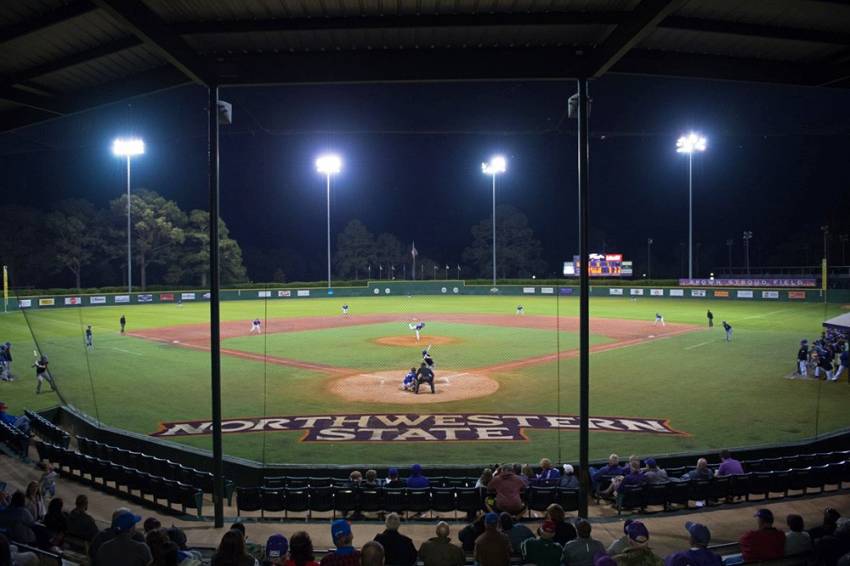 NATCHITOCHES – The Northwestern State baseball signing class of 2022 is a bit smaller than in previous years but one that provide immediate impact to the program.

The Demons announced Wednesday the addition of 14 players, who will join the NSU roster for the 2023 season.

“We are excited about this new group of Demons charged with the responsibility of carrying on what so many before have left for them,” said head coach Bobby Barbier, who begins his seventh season in at the helm of his alma mater.

“Our coaches work so hard to try to get a very specific type of player that not only has a skill set to win but a will to work. We believe we have found that in these 14 new Demons. I am so thankful for my entire staff and the hours they have put into this group and the hours they will put in to get them better.

High School: Four-year letterman for coach Brooks Badeaux’s Rebels … went 6-0 with three saves and pitched to a 1.75 ERA as a senior, earning all-district and all-region honors … helped Teurlings win 50 games in his final two seasons and reach the quarterfinals as a senior and the state semifinals as a junior … lettered two seasons in football for coach Dane Charpentier … class valedictorian had a 4.0 GPA and was selected to the Academic All-State team.

Associate head coach Chris Bertrand on Acosta: “JC was a late summer addition to the roster, but one who we feel can impact our bullpen in the years to come. He has a lower attack angle with the arm slot, a very high baseball IQ and a work ethic beyond his years. We feel that with some hard work, development and polish over the early part of his career, he can be a reliable guy out of the Demon bullpen. Having a young guy like JC in the program makes us better in a multitude of ways.”

Bertrand on Bryan: “Tyler comes to us after grabbing our attention at one of our camps and upon the recommendation of former Demon Jeff Casey. He was a three-sport athlete in high school, and we quickly noticed that he had some very nice athleticism to compliment his intangibles and competitiveness. He has a great feel for spinning the baseball and he is intense in his preparation and performance. We look forward to watching him grow as a Demon.”

Assistant coach Spencer Goodwin on Buzard: “Lathen is a player who draws everyone’s attention when he steps in between the lines. He’s a 6-foot-3 physical athlete who plays with fire, has the ability to hit for power and drive the ball the other way. We are really excited about his future here as a Demon.”

Bertrand on Carey: “Carson adds another physical presence to our offense, and he makes for a great target behind the plate for our pitching staff. He has the ability to hit for power, and he has shown that there is some arm strength in his throwing ability. Carson will spend some time early in his career getting back to 100 percent from a late high school injury, but we are very pleased with the skill set he brings to the program. Our experience with both Airline High School and Team Louisiana players of the past has us excited about the future of Carson’s game.”

High School: Three-year letterman for coach Josh Bromberg’s Falcons … named first-team all-district and third-team all-state as a utility player as a senior after batting .424 … ranked second on the team in batting average and was Clear Lake’s top pitcher as a junior … collected the second most hits on the team as a sophomore.

Bertrand on Castle: “Caleb is an incredibly gifted athlete, and we are really excited to see him compete for the Demons. He showcases a really special skill set at shortstop, has shown consistent growth at the plate as a hitter and is an explosive competitor on the mound. He has a big frame to pack some good muscle onto, and he runs extremely well.  Demon fans are going to have fun watching Caleb play the game.”

Summer 2022: Played for the Sylvan Lake Gulls in the Western Canadian Baseball League.

Prior to NSU: Two-time Gold Glove winner at Colby Community College … helped lead the Trojans to consecutive Super Regional appearances … batted .460 as a freshman for the Trojans.

Bertrand on Cust: “We are really excited to see the skills that Brayden brings to Demonland.  Another great athlete from a winning program, Brayden checks all of the boxes of what it is we were looking for in an outfielder in this class. He has a great frame, runs well, throws well, is a terrific defender in center field, and he adds a dynamic left-handed hitter to our lineup. Brayden has a chance to make some serious noise in a Demon uniform.”

High School: Two-year letterman for coach Rob Stramp’s Indians … earned first-team all-state honors (coaches), second-team all-state acclaim (sports writers) and an all-region selection after batting .356 with 31 RBIs as a senior … ranked 13th in the state of Texas in doubles … first-team all-district and all-area pick as a junior after batting .408 with 35 RBIs and a .510 OBP … his 51 hits ranked sixth in the state of Texas … helped Keller reach the state title game as a junior and the regional finals as a senior … three-year hockey letterman.

Goodwin on Dattalo: “Mike is a dude who flat-out hits. His ability to find the barrel and use the entire field is what stood out to us in the recruiting process. He’s flashed opposite-field power, is a low swing-and-miss hitter and an all-around awesome young man on and off the field. He comes to us from a very familiar baseball powerhouse in Keller High School, and will join two previous teammates in Alex (Makarewich) and Gray (Rowlett). His feel for hitting is something that is rare in young hitters and is something that makes Mike stand out.”

Summer 2022: Played for the Sylvan Lake Gulls in the Western Canadian Baseball League.

Prior to NSU: Played two seasons at Colby Community College … batted .295 with nine doubles, three triples, 10 home runs and 29 RBIs and notched a pair of wins and 18 strikeouts on the mound in 17 innings pitched in 2022 … twice named an Academic All-American – earning second-team honors in 2022 and first-team acclaim in 2021, finishing with a 3.95 GPA.

Goodwin on Froehlich: “Kyle is a guy who embodies what it means to be a Demon. There isn’t a negative thing I can say about him — an elite human being and person. His attitude, work ethic and determination to be great is what we look for in guys. Kyle is a two-way talent who will be a left-handed bat and right-handed arm off the mound. He comes to us with lots of experience from a very familiar junior college to our program in Colby Community College. Whether it’s on the mound, at the plate, or in the locker room with the guys, Kyle will bring value to our program because he is our type of player.”

Goodwin on Hill: “Cole is our type of player — a dirtbag who loves the game and flies around the diamond. Stealing 39 bags last year shows his feel and ability to wreak havoc on the bases, something that will be very valuable to our team. He’s very quick twitch and comes to our program with experience at both the D-I and junior college level.”

Summer 2022: Played for the Quincy Gems of the Prospect League.

Prior to NSU: Played two seasons at Murray State College … helped the Aggies reach the NJCAA Division II World Series … struck out 71 batters in 60 career innings … named an NJCAA Academic All-American as a sophomore … graduated with a 3.6 GPA.

High School: Three-year letterman for coach Jim McNamara’s Hilltoppers … two-way player batted .380 with six doubles and a home run as a senior while going 5-0 on the mound with a 1.33 ERA, earning all-league honors … helped Worcester go 16-5 and earn a top-10 ranking in New England as a senior.

Goodwin on O’Connor: “Tim has shown very quickly that his work ethic and focus fits the Demon Way perfectly. He’s the first one to the yard and the last one to leave. His determination to develop and earn a role for our program is exciting to see, and we look forward to seeing what his future holds. He is a lefty arm with good stuff who comes from a very good junior college program in Murray State College.”

Goodwin on Perry: “Perry is a young arm who we are excited about seeing how he develops in our program. He came to our showcase camp last summer and showed ability to throw multiple pitches for strikes and good feel for a plus slider. His work during our Summer Bridge program shows he is going to do whatever it takes.”

High School: Two-year letterman for coach Chris Schexnayder’s Dutchtown Griffins … earned all-district, all-parish and all-metro honors as a senior … all-district and all-metro pick as a utility player in his junior year … helped Dutchtown reach the state quarterfinals as a junior.

Bertrand on Reed: “Will Reed is a winner. He comes to us after successful seasons with two programs who win a lot.  Will was a steady and reliable part of both the Delgado and Dutchtown programs, and we are confident he will bring that stable, winning attitude with him to Demonland. He commands the ball really well, and he pitches with the experience and demeanor of a veteran. We are excited about the versatility Will brings to the pitching staff.”

Prior to NSU: Pitched two seasons at Butler Community College … went 5-3 with 58 strikeouts in 57 innings as a sophomore … struck out 24 in 24 innings, going 1-0 in 13 appearances as a freshman.

High School: Three-year letterman for coach Derek Verner’s Longhorns … earned all-state honors as a senior … helped Jones win a state title as a sophomore and reach the state quarterfinals as a junior … three-year basketball letterman helped Jones reach the playoffs all three seasons … member of the National Honor Society and graduated with a 3.79 GPA.

Bertrand on Talley: “We are excited about all of the things that Corbin brings to the Demons. With the graduation of two of our left-handed pitchers from last season, we knew we needed to address it in this class, and Corbin checks all of the boxes. He is a veteran arm, with experience as a starter, who possesses great command and feel for multiple pitches. He is committed to his craft, and he will be a big asset for us in the seasons to come.”

High School: Three-year letterman for former NSU pitcher Glenn Maynor’s Buccaneers … named the No. 3 right-handed pitcher in Louisiana by Perfect Game … helped the Bucs go 25-8 and reach the second round of the state playoffs as a senior … earned second-team all-district honors as a junior as Haughton went 28-10 and reached the state quarterfinals.

Goodwin on Tolbert: “Roman is another local kid who comes from a very good high school program in Haughton High School with coach Glenn Maynor, a former Demon pitcher. His 6-5 frame and power arm are something we are looking forward to working with. He has shown the ability to throw a low-90s fastball already, and the ceiling is high for him. He will be a big asset to our program moving forward.”