Nola brothers to face off in the National League Championship Series 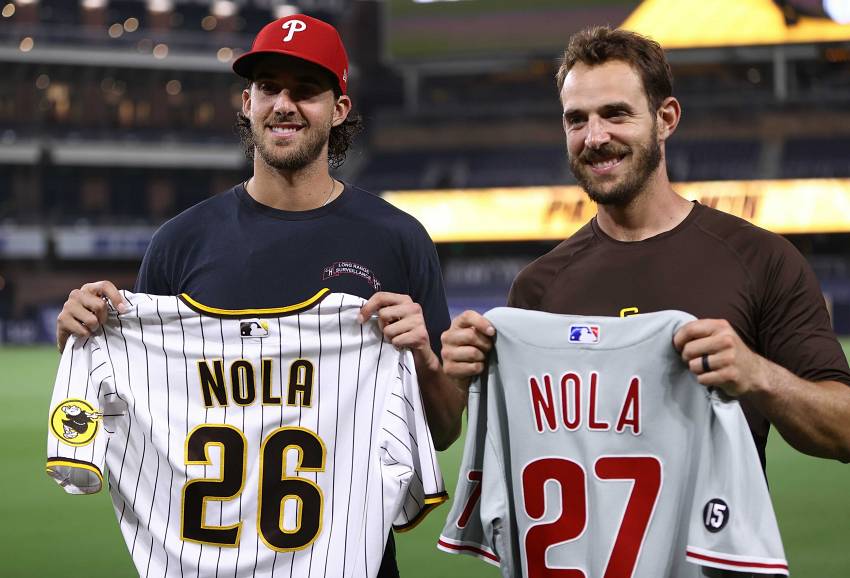 Philadelphia Phillies pitcher Aaron Nola and his brother Austin, the San Diego Padres’ catcher, have faced each other in regular season games before. But their teams’ upcoming series for the National League pennant will offer another chance for the brothers to see which player can claim bragging rights.

The brother vs. brother matchups will be important to them; but regardless of how their confrontations turns out, more significant is the World Series appearance that is at stake. This is the first postseason for Aaron, while Austin played with the Padres in the 2020 postseason.

Both brothers have played key roles in the games leading up to the NLCS, which starts on October 18.

Austin was 4-for-9 in the wild card series against the New York Mets, including a double and two RBIs. In Game 3, Austin’s single in the second inning drove in two runs and got the Padres off to a good start in their decisive 6-0 victory.

He was 4-for-12 in the Padres’ series win over the favored Los Angeles Dodgers, including a double and two RBIs. He got two of the Padres’ seven hits in a low-scoring Game 3 victory.

Aaron, an eight-year veteran with the Phillies, got the win in their wild card series against the St. Louis Cardinals. He pitched six scoreless innings, yielding only four hits and a walk.

Then in Game 3 of the NLDS against the Los Angeles Dodgers, he held the Atlanta Braves to only one unearned run in six innings to claim the win. He struck out six and walked only two in the process.

These outings by Aaron were consistent with his regular season performance when he led the National League in Strikeouts per Bases on Balls (8.103) and Bases on Ball per 9 Innings (1.273).

Aaron and Austin have faced each other on two prior occasions. In 2021, Aaron got the better of his younger brother by allowing only a walk in three at-bats. However, this year they opposed each other on June 24, when Austin got the go-ahead single in the sixth inning off this brother. The Padres defeated the Phillies 1-0 despite Aaron’s 10 strikeouts.

The only other time the brothers had faced each was in an practice game while both were attending LSU.