TULSA, Okla. – The Tulane football team had its three-game winning streak snapped in heartbreaking fashion in a 30-24 defeat in double overtime at No. 25 Tulsa in American Athletic Conference action Thursday evening at H.A. Chapman Stadium.

The Green Wave defense was able to make the Golden Hurricane run clock while gaining yardage on their next possession which came down to a third-down play with six second remaining. Tulsa third string quarterback David Brin threw up a Hail Mary pass to the right corner of the end zone that was caught from 37 yards out by J.C. Santana to tie the game time expired.

The two sides exchanged field goals on their first possessions, respectively, in the first overtime to keep the score knotted at 24.

Maintaining possession for the first drive in double overtime, Tulane ran four consecutive positive running plays worth 22 yards down to Tulsa’s three yard-line. However, Pratt was hit as he attempted to throw a third down pass across the middle toward the end zone, and it was intercepted by Golden Hurricane linebacker Zaven Collins who returned it 96 yards for a game-winning touchdown.

Senior running back Stephon Huderson crossed the century mark on the ground for the third time this season with 106 rushing yards and one touchdown, while freshman quarterback Michael Pratt completed a pair of touchdown passes to lead Tulane’s (5-5, 2-5 AAC) offensive attack.

The first half featured a defensive battle between both squads where first downs were hard to earn, and red zone trips were infrequent. Tulane’s best chance at points came early in the second quarter after an 11-play drive traveled just 35 yards in more than five and a half minutes but set up the Green Wave for a 54-yard field goal attempt that went just right of the upright to keep the game scoreless.

Tulsa (5-1, 5-0 AAC) made two trips to the red zone in the first half, and their second appeared destined to be rewarded with points. It was their final possession of the half, and the Golden Hurricane mustered a 15-play drive that went 69 yards and used nearly seven minutes of game clock. After converting a fourth down play, Tulsa took a shot at the end zone on a throw across the middle, but junior safety Larry Brooks made a diving catch to intercept the pass at the one yard-line to end the threat with 21 seconds remaining before halftime.

As both teams headed to the locker rooms at the intermission, Tulane earned just 122 total yards and seven first downs in the first 30 minutes of action. Tulsa amassed 136 yards and nine first downs.

The scoring drought wouldn’t last forever, and it ended just over midway through the third quarter when Huderson punched in a hard-earned, five-yard touchdown run. The Green Wave got the ball right back after the Golden Hurricane came up short on a risky fourth down play at their own 29 yard-line.

Two plays later, Pratt hooked up with redshirt junior tight end Will Wallace for a 27-yard touchdown strike to give Tulane a 14-0 lead with 3:07 left in the third quarter.

The fourth quarter provided a plethora of entertainment from both teams, as Tulsa cut its deficit in half, 14-7, on a rushing touchdown by its third-string quarterback with 9:17 remaining. Six minutes later, the Golden Hurricane tied the game on a touchdown pass that capped an 11-play drive.

Up next, Tulane returns home for Senior Day and its regular season finale against Memphis on Saturday, December 5 at Yulman Stadium. The game was previously scheduled for next Saturday, November 28 but the American Athletic Conference announced the change Friday. 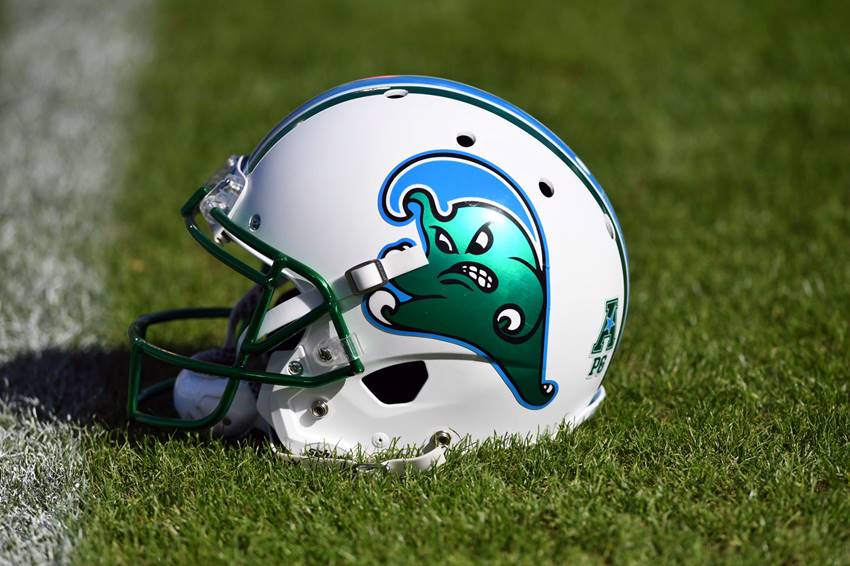 Game time and network to be determined at a later date NEW ORLEANS – Tulane University athletics announced today in conjunction with the American Athletic Conference that its Nov. 28 football game with the University of Memphis has now been moved to Dec. 5 at Yulman Stadium to accommodate conference institutions that had games postponed...

TEAM NOTES
• Tulane’s overtime loss at Tulsa marked the second time this season the Green Wave have played in extra time.
• Tulane faced Tulsa for the 17th time in program history. With the loss, Tulane fell to 5-12 all-time against the Golden Hurricane.
• Tulane’s loss snapped a three-game winning streak against Tulsa. The Green Wave have never defeated Tulsa in four straight games.
• Tulane’s matchup with Tulsa marked the second time this season that the Green Wave have played on ESPN’s Thursday night platform and the fourth time since 2018. Prior to 2018, Tulane had never played on ESPN’s Thursday Night Football.
• With the loss, Tulane had its winning streak snapped at three.
• The Green Wave was held under 30 points for the first time in seven games. Tulane has not scored 30-or-more points in seven straight games (in the same season) since the 1998 campaign.
• Tulane was outgained by Tulsa 522-302
• The gameday captains for this week were TE Will Wallace, WR Jha’Quan Jackson, LB Nick Anderson, DL Cam Sample.
• The Wave of Change flag carrier was DL De’Andre Williams.
• The No. 18 flag was carried by QB Keon Howard.
• With the loss, Tulane head coach Willie Fritz fell to 221-106-1 all-time. Fritz is 2-3 all-time in overtime games at Tulane.