No. 24 Southeastern rallies for thrilling 45-44 FCS playoff win over No. 8 Villanova 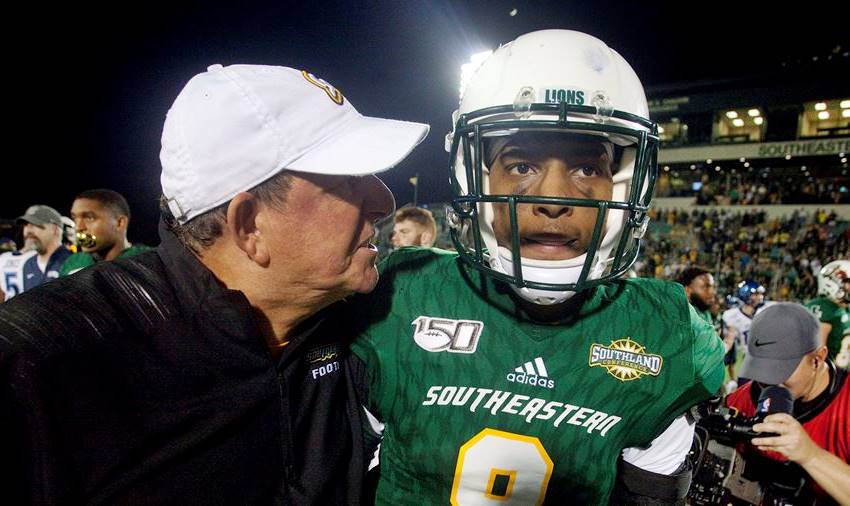 HAMMOND, La. – The six years it took for playoff football to return to Hammond, America was worth the wait.

CJ Turner hauled in an eight-yard touchdown pass from Chason Virgil with just under three minutes remaining to give No. 24 Southeastern Louisiana a come-from-behind 45-44 victory over No. 8 Villanova in the first round of the NCAA FCS Playoffs Saturday evening in Strawberry Stadium.

Southeastern (8-4) racked up 602 yards of total offense on the Wildcats (9-4), erasing a 17-point halftime deficit on the way to its first postseason win since 2013. The Lions advance to face No. 6 Montana in the second round at 2 p.m. on Saturday, Dec. 7 in Missoula, Montana.

“Our guys believed and competed for 60 minutes,” Southeastern head football coach Frank Scelfo said. “Villanova is a great team and we had to give our best effort to win. I’m so proud of our guys and how they never gave up.”

Villanova had one last chance in the final minutes, but an all-out blitz forced Wildcat quarterback Daniel Smith’s fourth-down throw to Jaaron Hayek to sail high. The Lions kneeled it out from there to secure the victory.

Virgil threw for a career-high 474 yards – the third-highest in program history, three touchdowns and an interception on 36-of-49 passing in the victory. The trio of Turner (11 catches, 173 yards, 2 TD), Javon Conner (9-102-1 TD) and Bransen Schwebel (6-119) gave Southeastern three receivers over 100 yards in the same game for the first time ever.

Devonte Williams led the SLU rushing attack with 12 carries for 78 yards and a score. Cole Kelley rushed for two scores, giving him a team-high 10 rushing touchdowns on the season. Kelley is the first Lion to reach double-digit rushing touchdowns in a season since Bryan Bennett in 2014.

Isaac Adeyemi-Berglund led SLU with 11 tackles, while Tre’ Spann had a team-high two tackles for loss. Ronald Cherry III and David Fields each recorded sacks for the Lions.

Smith threw for 283 yards and four touchdowns on 19-for-30 passing in the loss. Hayek was his top target with six catches for 105 yards and a score. Smith also rushed for a team-high 90 yards and a touchdown to lead the Villanova ground game.

Defensively, Forrest Rhyne finished with 11 tackles and a tackle for loss to lead Villanova. Elijah Glover also returned an interception 78 yards for a touchdown.

First Quarter
Southeastern drove into Villanova territory on the opening drive of the game, but Virgil and Austin Mitchell couldn’t connect on a fourth-and-seven pass and the Lions turned the ball over on downs.

The Wildcats struck first, methodically moving the ball 43 yards on 11 plays. The drive stalled just outside of the SLU red zone and Drew Kresge nailed a 38-yard field goal to give Villanova a 3-0 lead with 6:56 remaining in the opening quarter.

Southeastern answered right back quickly, as Virgil hooked up with Schwebel for a 46-yard catch-and-run to the Wildcat 10-yard line. On the next play, Williams took a direct snap and weaved through VU tacklers for a touchdown and a 7-3 SLU advantage with 4:30 remaining in the opening quarter.

Villanova then retook the lead on the next drive. The Wildcats marched 63 yards on seven plays, capping the drive when Smith found Todd Summers wide open from four yards out. VU carried a 10-7 lead into the second quarter.

Second Quarter
Both teams turned the other over on downs to start the second quarter, as both made plays on fourth-and-short to end scoring threats. Kelley helped SLU march into the Villanova red zone, but a big hit by Garrett Zobel forced Kelley’s pass to go right in the hands of Glover, who raced untouched for a pick six and a 17-7 Villanova lead with 7:17 left in the opening half.

After a Southeastern three-and-out, Villanova widened its lead. Smith avoided a sack and took off for a 53-yard touchdown to put the Wildcats up, 24-7, with 3:28 left in the second quarter.

Southeastern responded with a six-play, 69-yard scoring drive. Virgil connected on long passes to Turner (25 yards) and Schwebel (31 yards) to set up Kelley for a one-yard touchdown plunge that cut the lead to 24-14 with 1:33 left in the back-and-forth opening half.

Villanova was not content to rest on its laurels. Smith found Hayek for a 57-yard touchdown to go into the break with a 31-14 cushion.

Third Quarter
On the opening kickoff of the second half, Dez Boykin busted loose for a 65-yard return to set up Villanova in SLU territory. However, tackles for loss by Herman Christophe and Tre’ Spann ended the Villanova drive.

That opening stand set the tone for a third quarter that would see SLU outscore VU, 17-0, and finish with a 200-48 yardage advantage. The Lions drew closer with an eight-play, 90-yard drive. Virgil found Williams on passes of 38 and 18 yards to set up a three-yard score by Kelley to cut the lead to 31-21 with 10:31 left in the third quarter.

After forcing a Villanova punt, the Lions went right back to work. Turner caught a short pass from Virgil, slipped a tackle and raced down the far sideline for a 29-yard score that cut the Villanova lead to 31-28 with 6:31 remaining in the period.

Southeastern forced a Wildcat three-and-out and Villanova punter Nathan Fondacaro hit a 17-yard punt off the side of his foot to give the Lions the ball at the VU 36-yard line. SLU’s drive stalled inside the 10-yard line, but Bryce Broussard knocked in a 25-yard field goal to tie the game heading into the final stanza.

Fourth Quarter
Villanova finally got back going offensively to start the fourth quarter. Smith found Summers from a yard out to cap an eight-play, 79-yard march and put the Wildcats back on top, 38-31, with 13:06 remaining.

On the next play from scrimmage, Malik Fisher stripped Virgil and Aaron Seigle fell on the loose ball at the Lion 29-yard line. However, the Lion defense stiffened and turned the Wildcats over on downs to get the ball back with just under 11 minutes left.

Southeastern took advantage to even the ledger. A fourth-and-two conversion from its own territory highlighted SLU’s 11-play, 65-yard drive. Virgil found Conner from four yards out to knot the score at 38-38 with 6:36 remaining.

Villanova, making its 13th playoff appearance, didn’t blink on its ensuing drive. Smith found Changa Hodge for a 50-yard touchdown to put the Wildcats back up with 4:36 remaining. Hoever, Kresge pushed the extra point wide left and the lead was just 44-38.

Southeastern took its first lead since the opening quarter after a seven-play, 75-yard scoring drive. A 51-yard catch-and-run by Turner took the ball to the VU 11-yard line. On fourth-and-seven, Turner hauled in a Virgil scoring toss. Broussard’s extra point was true to put SLU on top, 45-44, with 2:56 remaining.

Villanova marched into SLU territory quickly, then Hayek hauled in a 40-yard touchdown throw from Smith. However, Hayek pushed off against Xavier Lewis to create the separation and the pass interference call forced the Wildcats into a first-and-25 from their own territory.

The Lion defense held serve from there, as on fourth-and-nine, Spann led a fierce SLU pass rush that forced Smith’s throw to an open Hayek to sail just out of his reach. Southeastern then was able to kneel it out to secure its first postseason victory since a 30-29 win over Sam Houston State on Dec. 7, 2013.

Up Next
Southeastern will travel to face No. 6 Montana out of the Big Sky next Saturday at 2 p.m. in Missoula, Montana. The game will be televised on ESPN3 and can also be heard on KSLU-FM (90.9), Kajun 107.1 FM, The Highway 104.7 FM and the Boss 103.7 FM/1400 AM WFPR, online at www.LionSports.net/live and via the TuneIn Radio and Lions Game Day Experience apps.