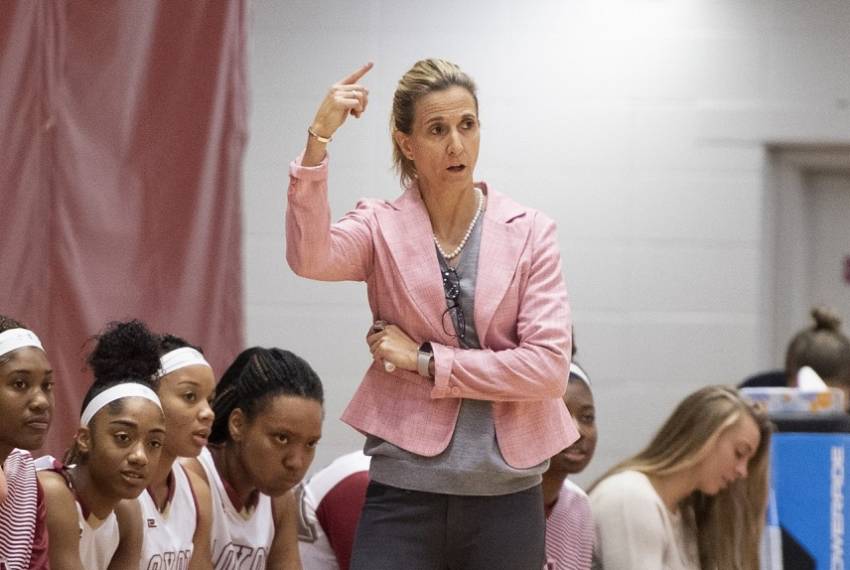 After trailing by 11 in the fourth quarter, the 24th-ranked Wolf Pack stormed back to take down Faulkner and earned coach Kellie Kennedy her 300th career victory

MONTGOMERY, Ala. – The 24th-ranked Loyola Wolf Pack traveled to Montgomery, Alabama, Thursday to make up a game that was postponed earlier in the week. Trailing by double digits with eight minutes to go, the Wolf Pack stormed back with a 34-point fourth quarter to claim the win, 83-77, over the Faulkner Eagles.

The Wolf Pack is now 11-4 overall and 5-2 in Southern States Athletic Conference play, and the win gives head coach Kellie Kennedy the 300th win of her 14-year career with Loyola as well.

NEWS: Head coach Kellie Kennedy earned win No. 300 Thursday after the No. 24 Wolf Pack stormed back down 11 in the fourth quarter at Faulkner. #GeauxPack
– https://t.co/rz3wCWDvCG pic.twitter.com/aaAZJA7YRO

The two teams played most of the first half close, and it started with a 15-12 first quarter in Loyola’s favor. Taylor Thomas started the scoring off quickly with a 3-pointer, then that was followed up by a Liz Critton score to make it a 5-0 game in the first two minutes. After Faulkner answered with four points, again, Critton added another bucket while Thomas’ 3-pointer broke a 7-7 tie with three minutes left in the quarter. Thomas and Sydni Tangle each gave Loyola a three-point lead in the final minute, as Thomas’ score came with a minute to go and Tangle made her 3-point shot as time expired.

Much like the first quarter, neither team could hold a two-possession lead in the second until the Wolf Pack finally broke through with four minutes until halftime. The Eagles, however, grabbed their first lead of the game, 17-15, less than two minutes into the frame, but Tangle quickly put the Pack back on top, 23-20, with two more 3-pointers sandwiched between a Jazmene McMillan score. After Faulkner regained the lead, Tay Cannon scored five points and Thomas turned a steal in a made basket to extend the lead to five, 30-25. Another 3 for Thomas, free throws by Critton, and a score by Cannon put the Wolf Pack up 37-30 at the break.

The Wolf Pack fell behind in the third, getting outscored by the Eagles 27-13 in the quarter. Faulkner scored nine of the first 11 points to tie the game in the first three minutes, 39-39. Kennedy Hansberry ended the Eagles’ first run with a pair of free throws, but the home team scored seven straight to take a 46-41 advantage over Loyola. McMillan made a 3-pointer at the 3:33 mark, but once again, Faulkner used an 8-0 run to jump up 10, 54-44. Cannon and Tangle combined for five points down the stretch for Loyola to trail the Eagles 57-49 entering the final frame.

Faulkner shot 10-for-14 in the third quarter, but it was the Pack’s turn to get hot in the fourth. They went 9-for-14 from the field (5-for-7 from 3) and 11-for-12 from the free-throw line to mount the comeback. It all started with Faulkner going up 11 90 seconds into the fourth quarter, as Loyola turned defense into offense to score 13 straight points in less than two minutes to regain the advantage. Thomas and Tangle each turned steals into scores, Hansberry made a 3-pointer, and Critton and Sandra Cannady each had two free throws to move Loyola back ahead, 67-65, with six minutes to play.

The Eagles were able to tie the game twice over the next two and a half minutes, but two more 3s by Hansberry kept the Pack ahead. A Thomas 3-pointer extended the score to 76-72 with two minutes left, and six free throws by Hansberry in the final 1:30 clinched the win.

PACK FACTS
– Taylor Thomas finished with a game-high 23 points, nine rebounds, three assists, and six steals. This was her third game this season scoring at least 20 points. It’s also her third game of the season grabbing at five or more steals.

– Thomas also made five threes while Sydni Tangle made four. The team combined to hit 13 shots behind the arc, which ties a season record set in last Saturday’s Mobile game.

– Second on the team in points was Kennedy Hansberry, who scored 17 in addition to her five assists. Hansberry is now in sole possession of the ninth place in the Wolf Pack record book for career assists, now with 304 dimes for her career.