The game was delayed for an hour and 45 minutes due to lightening in the area. With the loss, Tulane falls to 1-2 on the year, while Ole Miss improved to 3-0.

“Well congratulations to Ole Miss they did an excellent job,” head coach Willie Fritz said. “(They) really were physical and they stretched the field like we knew they would. They are a very impressive team. For us to be able to compete and have an opportunity to win a game like that, we got to play really well. I don’t think we played very good and I’m disappointed in that. I thought we prepared extremely well, but today it didn’t look like it.”

Freshman quarterback Michael Pratt finished the game by going 10-of-18 through the air for 166 yards. He also threw for a pair of touchdowns. Pratt has now thrown a touchdown pass in 13 straight games.

With his two touchdown scores Pratt now has 27 for his career which is tied for ninth in program history. 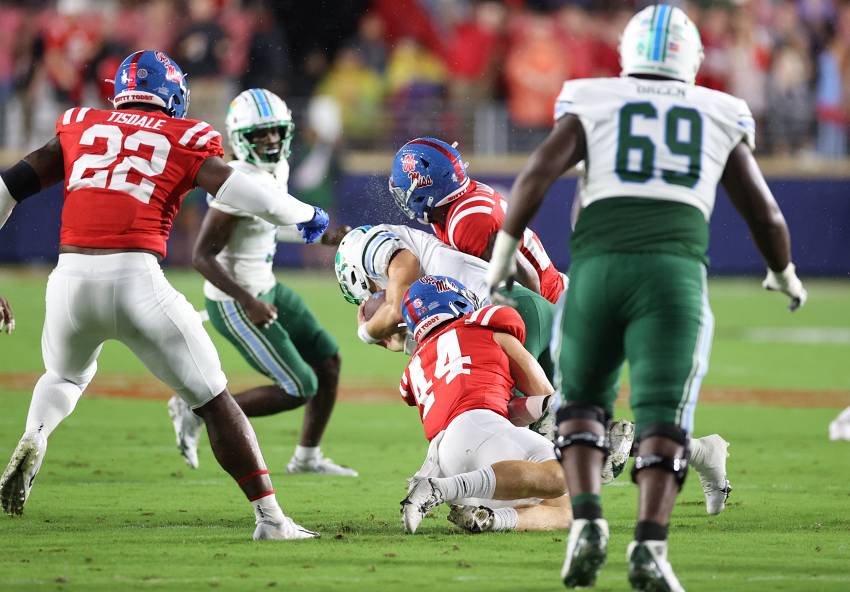 Despite blowout at Ole Miss, Tulane exactly where it should be

It was disappointing but it is not reason to get depressed.

The Rebels scored on their first two offensive series of the game and quickly opened up a 13-0 lead with 6:41 to go in the first quarter.

The Green Wave fought back with a five-play, 33-yard drive to get on the scoreboard. Carroll capped the drive as he plunged in from a yard out to cut the Rebels lead to 13-7 with 3:40 remaining in the game. Tulane’s scoring drive was setup after junior linebacker Nick Anderson forced a fumble.

The six-point deficit was as close as the Green Wave would get for the remainder of the game. Ole Miss reeled off touchdown drives on its next four drives to open up a 40-14 lead in the first half.

Tulane did add a touchdown before the end of the first half to trim Ole Miss lead to 40-21. Pratt found junior wide receiver Shae Wyatt for a 37-yard touchdown pass. Wyatt’s touchdown grab was his first at Tulane.

The Rebels put the game out of reach in the third quarter, as they outscored the Green Wave 21-0 and held Tulane to just 31 yards of total offense in the frame.

Ole Miss quarterback Matt Corral led the way for the Rebels as he accounted for seven total touchdowns (three passing and four rushing).

“We have to come back and get back to the drawing board,” Wyatt said. “Just because we took a beating today doesn’t mean that the rest of the season is going to go this way.”

Tulane returns to action on Saturday, Sept. 25, as it welcomes UAB to Yulman Stadium. Kickoff is set for 7 p.m. and will be aired on ESPN+.

· Tulane’s matchup with Ole Miss was delayed for an hour and 45 minutes due to lightening in the area.

· Tulane failed to score on its first drive of the game for the first time this season.

· Tulane faced Ole Miss for the 72nd time in program history on Saturday. The Green Wave’s visit to Oxford was its first since 2012.

· Ole Miss has won the last 12 meetings versus Tulane.

· Dublin’s start was the 52nd of his career. Dublin has the most starts of any player on the team.

· Pratt finished the game with two touchdown passes. The freshman signal caller has now thrown for multiple touchdown passes in 11 career games. He also has thrown for a touchdown in every game he has appeared in for the Green Wave (13 straight games).

· With his two touchdown scores, Pratt now has 27 for his career which is tied for ninth in program history.

· Wyatt hauled in his first receiving touchdown with the Green Wave, as he scored from 39 yards out in the second quarter.

· Cameron Carroll scored his first rushing touchdown of the year.

· Clark finished the game with a career-high 12 tackles.

· Hodges picked up his sack of the season. He also added another tackle for loss, as he finished the game with 8.0 tackles.

· For the third straight game, Tulane’s defense created a turnover which led to a touchdown.

· Anderson forced a fumble and Williams recovered a fumble.

· Merek Glover missed his only field goal attempt of the game, but he did connect on three extra points. Glover now has 309 career points which ranks third all-time. Needs just 25 more points to surpass Seth Marler as the program’s all-time leader in career points.