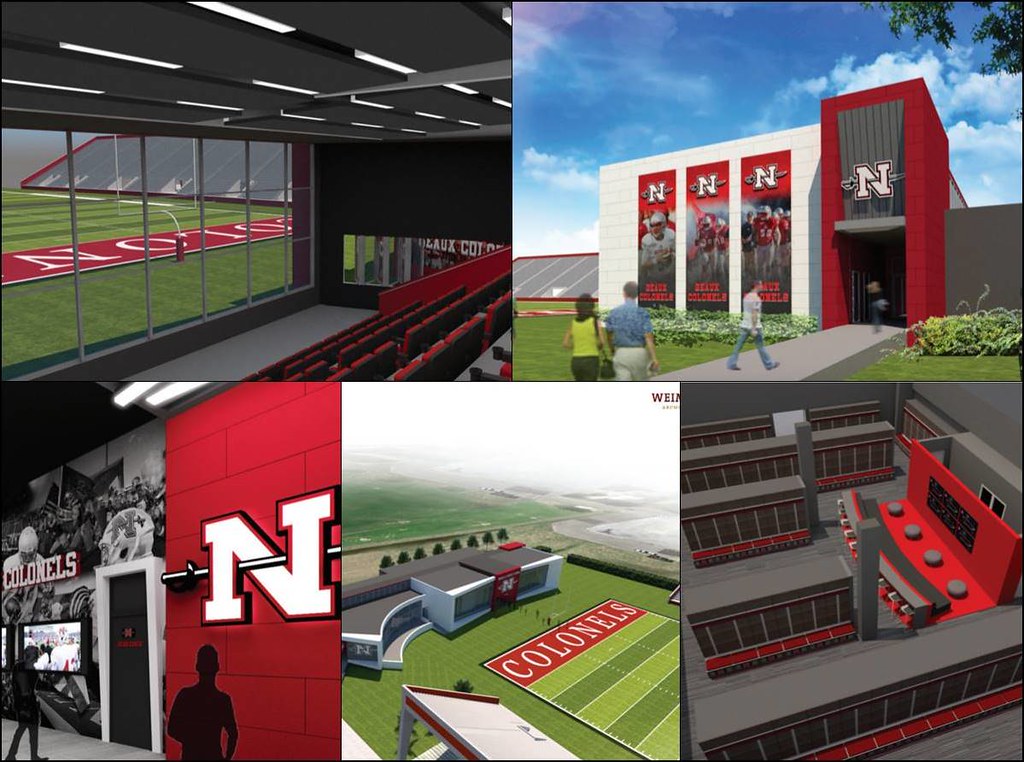 THIBODAUX, La. – Nicholls State University Athletics announced Wednesday it has received the largest gift in the institution’s history, which will be used to fund the expansion of Barker Hall to include a football operations center at the south end zone of John L. Guidry Stadium.

“I cannot adequately express just how thankful we are to the donor and the donor’s family for their incredible generosity,” Director of Athletics Matt Roan said. “They care deeply about Louisiana, Nicholls State University, and are passionate about the ongoing development and success of Colonel Athletics. This is a game changer, and we will continue to strive and make them proud every day to be Colonels.“

The gift of $2.52 million by the anonymous donor will help fund the $6.5 million project. The donor will be revealed at a future date, along with naming information of the new center. Several other donors and families also provided significant leadership commitments.

The team room will also function as a gameday club seating area, which will produce revenue for the benefit of all 17 programs. The expanded Barker Hall will also allow the current footprint to be re-purposed and revitalized for several other programs and functions.

“Because of this gift, as well as other leadership-level support, our recruiting and student-athlete experience will be significantly improved,” Roan said. “This facility will be among the finest in all of the FCS and gives us an advantage over our competition as we compete consistently for championships.”

“Today signifies another extraordinary moment in the institution’s history, and we want to emphasize that any act of philanthropy or support is significant and helps us reach new levels.”

Construction for the facility is anticipated to be complete by the 2020 football season.

“We are excited for the entire University athletic program, the whole community, and this is a monumental step forward,” Nicholls head football coach Tim Rebowe said. “Barker has served as a home in the past for several generations of Colonel student-athletes. So we recognize all the hard work and sweat that those guys have gone through, and now they get to see this building take on a new shape and a new form. It’s going to help us in the future in recruiting and getting even more quality student-athletes. Once they’re here, we will best be able to develop our current student-athletes, which will be a plus for us.”

The architect group for the project is Weimer Gros Flores, based in Thibodaux. Along with several new structures in the community such as fire stations, banks, and shops, their portfolio also consists of the renovated elevator lobby at Guidry Stadium.

The project headlines several major improvements to the Nicholls Athletics facilities over the past two years. Before the start of the 2017 season, Manning Field at John L. Guidry Stadium received a new Geo Surfaces artificial playing surface, and a Nevco LED video scoreboard and new sound system were installed as well. Basketball has received a new removable court, goals, Nevco LED tables, and lighting system, while softball and baseball had Geo Surfaces artificial turf installed in the infields. Those surfaces were named after Neal Swanner and Ben Meyer, respectively. The softball complex also features new dugouts, lighting, and bleachers, while baseball has seen a new pressbox, grandstand, elevator tower, and pedestrian bridge constructed.

Barker Expansion Phase II design will begin once construction begins, and will include a new indoor practice facility, again benefiting all 17 Colonel programs. It will tie into the newly renovated Chabert Hall, the strength and conditioning and nutrition center of Colonel Athletics.