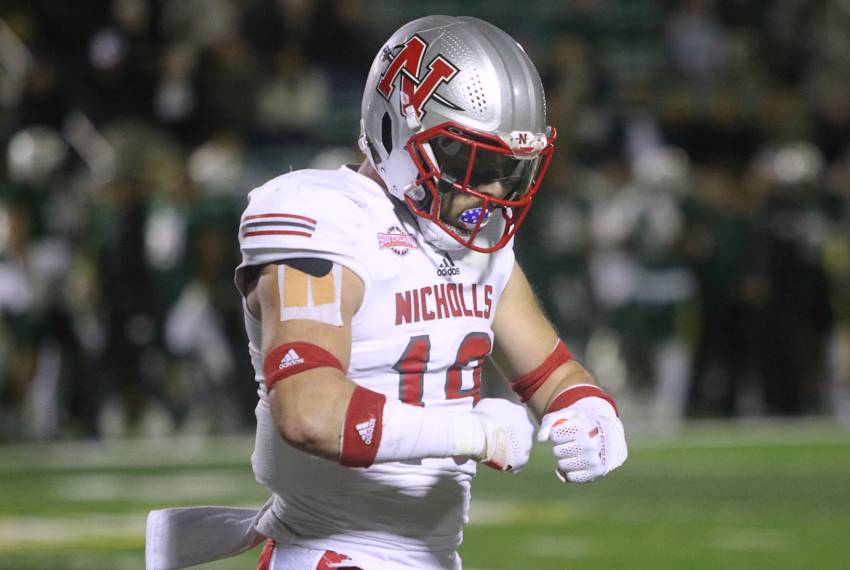 The Lions (8-3, 6-2 Southland) led by seven at halftime, but the visiting Colonels (6-5, 5-3 Southland) rode a monster 266-yard, three-touchdown rushing performance by Collin Guggenheim to 24 straight second-half points. SLU cut the lead to three on back-to-back rushing touchdowns by Cole Kelley in the fourth quarter and drove into Colonel territory on the final possession, but Rengifo’s kick to send the game to overtime was off target.

Southeastern will now see if its eight Division I wins – including five on the road – will earn it a spot in the 24-team FCS playoff field. SLU’s three losses came by a combined nine points with two coming on the road at the hands of nationally-ranked UIW and FBS foe Louisiana Tech. The playoff field will be announced on Sunday at 11:30 a.m. (Central) on ESPNU.

Kelley’s top targets on Thursday was Austin Mitchell, who finished with eight catches for 85 yards and a touchdown. The Plaquemine, Louisiana native is the third player in program history with 1,000 receiving yards in a season, finishing the regular season with 1,035. His 3,000 career receiving yards increases his program record tally. Taron Jones grabbed nine passes to lead Southeastern, while Nolan Givan hauled in a pair of touchdowns.

Southeastern struck first on the game’s opening drive. Kelley bulled in from three yards out to cap a six-play, 58-yard scoring march that put the Lions ahead, 7-0.

Nicholls answered right back, as Franklin broke free for a 53-yard reception on the Colonels’ first play from scrimmage. Four plays later, Granier and Franklin again hooked up for a seven-yard score that knotted the score at 7-7 with 9:48 left in the opening quarter.

The Lions came right back to take the lead with a methodical 11-play, 75-yard scoring drive that was highlighted by a 25-yard pass from Kelley to Brennon Dingle. Givan made a diving grab in the corner of the end zone to put SLU back up, 14-7, with 4:05 left in the first period.

The lead would be short-lived, as Guggenheim busted loose for a 45-yard touchdown run to tie the score at 14-14.

After Southeastern was forced to punt, Nicholls took their first lead when Guggenheim powered in from two yards out to give the Colonels a 21-14 lead.

Mitchell broke loose on a 37-yard reverse to spark a quick five-play, 75-yard scoring march. Kelley found Givan from 24 yards out to knot the score at 21-21 less than a minute into the second quarter.

Southeastern forced the first Nicholls punt of the game and then retook the lead. A 27-yard catch-and-run by Joseph Wilson opened a seven-play, 67-yard touchdown drive. Mitchell hauled in a short Kelley pass and scored from 15 yards out to put the Lions back on top, 28-21.

Nicholls then embarked on a 15-play, 73-yard drive deep into Southeastern territory. However, on fourth-and-goal from the two, Guggenheim caught a short pass from Scott in the flat and was unable to shake Fisher, who stopped him short of the goal line.

On the ensuing drive, Southeastern was forced to punt. Dingle forced Franklin to fumble and Jack Henderson recovered on the Colonel 32-yard line with the clock running down in the second quarter. However, Dingle was called for kick catch interference, which nullified the turnover. Nicholls moved into field goal range, but a misplayed snap allowed SLU to maintain a seven-point lead going into the break.

The third quarter was all Colonels. Granier scored from three yards out to cap a nine-play, 88-yard scoring drive on the second half’s first possession to tie the score at 28-28. After a Lion three-and-out, Nicholls took the lead for good when Gavin Lasseigne connected on a 43-yard field goal to put Nicholls up, 31-28, with 6:14 left in the period.

A SLU fumble on the ensuing kickoff set the Colonels up with a short field.

After Nicholls regains the lead on a Gavin Lasseigne field goal, the Colonels get the ball right back after Tyler Morton knocked the ball loose on the ensuing kickoff❗️ #SouthlandStrong #GeauxColonels #FCS

Four plays later, Granier slipped in from a yard out to cap a 17-yard drive that put Nicholls up, 38-28, with 4:53 left in the third quarter.

Southeastern drove into Nicholls territory, but Mitchell was stopped on a third-and-short to give the Colonels the ball back. The next Nicholls drive went into the fourth quarter, with Guggenheim getting free for a 16-yard touchdown run on the first play of the final period.

SLU cut into the lead with its first score of the second half. Kelley found Mitchell (18 yards) and Terrell Carter (27 yards) on consecutive passes to set up a one-yard plunge by the Lafayette, Louisiana native that chopped the lead to 45-35.

The two teams exchanged punts and Nicholls looked poised to put the final nail in the coffin when it drove into Southeastern territory. However, the Lion defense kept SLU in the game by stopping the Colonels on fourth down at the Southeastern 27-yard line with just over six minutes left.

Kelley and company needed less than three minutes to close the gap to three. Kelley scored from a yard out to pull the Lions within, 45-42, with 3:17 remaining.

Though the Lions would eventually make the Colonels punt, Guggenheim earned a couple of first downs that helped drain Southeastern’s three timeouts.

SLU would take over on its final possession at its own 35-yard line with 32 seconds remaining. On the first play, Kelley found Mitchell deep down the right sideline for a 34-yard reception to the Colonel 31-yard line. Southeastern worked its way a few yards closer, but Rengifo’s 44-yard field goal attempt missed left and ended SLU’s comeback hopes.