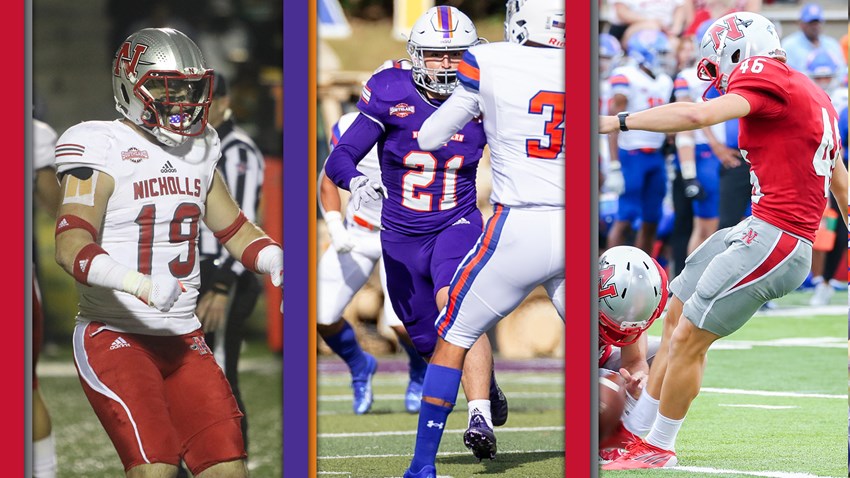 Guggenheim is the Offensive Player of the Week after rushing for a season-high 266 yards and three touchdowns in a 45-42 upset of then-No. 12 Southeastern on Saturday to close out the 2021 season. His yardage total was 15 shy of the single-game program record and stands as the third-most among FCS players this season.

Pedraza earns Defensive Player of the Week recognition after accounting for four of the Demons’ season-best 11 sacks in a 24-20 victory over McNeese. He posted a sack in each quarter for a career-high tally. Pedraza also broke up a pass in the win.

Lasseigne was perfect in placekicking work in the Colonels’ upset of the Lions, connecting on all six PATs and drilling a 43-yard field-goal in the eventual three-point triumph. The 43-yarder gave Nicholls the lead for good and gave Lasseigne a league-high 11th made field-goal.

Offensive Player of the Week: Collin Guggenheim, Nicholls – Freshman – Running Back – Kenner, La.
Guggenheim led the Colonels offense in an upset of No. 12 Southeastern with a season-high 266 yards and three touchdowns. Averaging 9.2 yards on 29 carries, Guggenheim found the end zone on 45-, 2-, and 16-yard runs. It marked his fifth consecutive 100-yard game as he’s averaged 162.6 yards as the Colonels’ feature running back this season.

Defensive Player of the Week: Jared Pedraza, Northwestern State – Freshman – Linebacker – Franklin, Texas
Pedraza rung up a career-best four sacks, helping the Demons tally a season-high 11 sacks, in a win at McNeese. He posted a sack in each quarter with his final two coming after McNeese had crossed into NSU territory. Both of his final two sacks came on third downs, forcing McNeese punts. Pedraza added a pass breakup and his team-best eighth QB hurry of the season.

Special Teams Player of the Week: Gavin Lasseigne, Nicholls – Sophomore – Placekicker – Raceland, La.
Lasseigne kicked a 43-yard field goal in the third quarter in the River Bell Classic which gave Nicholls the lead for good and turned out to be the difference in the game. Lasseigne’s 43-yarder was his league-high 11th made field goal of the season. He was also 6-for-6 in PATs in the 45-42 victory, ending the year with just one missed extra point.