We looked around the NFC South as rookie minicamps take place around the NFL. Now we look at how newcomers for a few other NFC teams fit into the new homes.

For the Giants, star running back Saquon Barkley takes pressure off the signal caller. First round pick Daniel Brown will sit and watch while Eli Manning continues at quarterback. Everyone who wondered if New York reached on the Duke QB at No. 6 overall will be curious to see how long it takes Brown to develop into a starter

Another of the three Giants first round picks, defensive tackle Dexter Lawrence, is an immediate upgrade while the third, DeAndre Baker, could grab a starter’s role at cornerback. Sixth round pick Corey Ballantine, another corner, could be heavily counted upon to play early. Defensive end Ximines Oshane, a third rounder, is a pressure guy off edge.

It’s safe to call the G-Men a rebuilding team, no matter what their management says publicly.

If you want an underdog who can take advantage of the happening in Big Blue, look no further than undrafted linebacker Josiah Tauaefa from UTSA. He totaled 111 tackles last season and impressed enough to earn a $110,000 signing bonus from the Giants.

The Redskins hope safety Landon Collins will be a huge addition and playmaker after arriving in the offseason from New York but folks want to know more than anything how long it will be before top pick Dwayne Haskins takes over behind center? The 17th overall pick will always be directly compared to Brown of the Giants.

As for other ‘Skins rookies, third round pick Terry McLaurin can make an immediate impact for Washington’s lack luster receiver corps with his 4.35 speed, while B.J. Blunt, a McDonogh 35 and McNeese product, should get to demonstrate what he can do right away at linebacker.

Staying the NFL East, Dallas fourth round pick Tony Pollard will bear watching at running back. The ‘Boys are already discussing plans on how to use him. Undrafted back Mike Weber (Ohio State) had a third or fourth round grade from many as he hopes to team up with former Buckeye star Ezekiel Elliott.

Offensive tackle Mitch Hyatt, undrafted out of Clemson, is an absolute steal. With 57 starts in college, he may be the overall top undrafted talent out the year. The Cowboys may benefit quickly here.

Fifth rounder Joe Jackson out of Miami could help at defensive end in Randy Gregory’s absence. Jackson had 35 tackles for loss and 22 1/2 sacks as an impact college performer. Undrafted defensive tackle Daniel Wise from Kansas is a fierce competitor with 151 tackles, 18 1/2 sacks and 44 TFLs with the Jayhawks. Offensive guard Connor McGovern, a third rounder, will push hard at the left guard spot currently occupied by Connor Williams.

We complete our eastern tour with the Eagles. Second rounder Miles Sanders is productive, power runner with good speed. He will team up with recently added veteran Jordan Howard, traded from the Bears after racking up 3,370 yards and 24 scores in three years.

Philly hopes first rounder Andre Dillard could push 37-year old Jason Peters out at left tackle. Defensive end Shareef Miller, a fourth round pick out of Penn State, is a good pass rusher joining a team that usually gets the best out of edge players.

The Rams should slide fourth round DT Greg Gaines into the rotation. He may replace Ndamukong Suh, still a free agent.

Free Safety Taylor Rapp, a second rounder, should produce early results while left tackle Bobby Evans, a third round pick from Oklahoma, will slowly slide into Andrew Whitworth’s spot at left tackle. Right tackle David Edwards, a fifth rounder from Wisconsin, could join with Evans to form the bookend tackles there for years to come.

Nick Bosa is an immediate force added to the 49ers while Dee Ford, the 28-year old veteran who spent five seasons with the Chiefs and produced 30.5 sacks, also give the NFC West squad firepower off the edge.

Second rounder Deebo Samuels is already prominient on depth chart for the Niners at wideout while third round choice Jalen Hurd may grow into a move tight end after starting his college career as a running back.

Arizona coach Kliff Kingsbury has lots of “toys” to with which to play as a rookie NFL boss but he may have a tough job to begin the journey. How long will it take Kyler Murray to get it going?

The Cardinals had some key offseason acquisitions as veterans who can porived immediate help. Marcus Gilbert (87 starts in Pittsburgh), and J.R. Sweezy (78 starts in Tampa) will look to work for Murray on the o-line. Tight end Charles Clay with 339 catches, 3,631 yards and 23 touchdowns for the Bills, may find a more prominent role in Kingsbury’s spread attack.

As for the Cardinal youngsters, second round wideout Andy Isabella should be ideal in the slot but fellow rookie receivers Hakeem Butler and Keesan Johnson are both physical, big targets for the outside. Sixth round center Lamont Gaillard proved valuable for  Georgia.

Fifth rounder Deionte Thompson is future star for ‘Zona in my opinion at safety.

Seattle second-rounder D.K. Metcalf will be afforded every opportunity to succeed as a big play threat outside at receiver. First round surprise pick L.J. Collier brings a super hot motor at the edge. His 14 1/2 sacks at TCU have the Seahawks expecting him to soften loss of Frank Clark.

The Packers hope a trio of offseason veteran acquisitions, safety Adrian Amos with outside linebackers Za’Darius Smith and Preston Smith, will add juice to defense.

As for Green Bay’s two first rounders, Darnell Savage will push incumbent Josh Jones at safety for Green Bay and defensive end Rashan Gary has too much talent to sit.

The Vikings will give second round pick Irv Smith, Jr. chances to make plays at tight end behind reliable veteran Kyle Rudolph.

Top pick Garrett Bradbury is penciled in as starter at center and guard Dru Samia (fourth rounder, Oklahoma) is expected to push for reps on an Minnesota offensive line that needs an upgrade. Third round running back Alexander Mattison is durable and will get his share of carries with veteran Latavius Murray now in New Orleans.

Chicago is on the cusp of something big. Adding Kahlil Mack last season was huge. Despite picks in the first two rounds this year, Bears head coach Matt Nagy enters his second season with great optimism.

Will Windy City help come from David Montgomery, a third round pick at running back from Iowa State? He can soften the blow from the loss of Jordan Howard. Montgomery had 2,925 yards and 29 touchdowns for the Cyclones. Wide receiver Riley Ridley will need more experience as just a one-year starter at Georgia but seemed like a bargain in round four.

Detroit went heavy at tight end this offseason, adding two in the draft and one via free agency.

First rounder T.J. Hockenson and seventh round Isaac Nauta are great targets who can learn from veteran Jesse James, who comes over to the Motor City from the Steelers.

Fourth rounder Austin Bryant should be in the Lions rotation at defensive end while second round middle lineabacker Jahlani Tavai brings his teeth rattling tackles to a rebuilding defense. Will Harris, third round safety, has 4.41 speed but is also a physical, sure tackler and good blitzer. Amani Oruwariye (fifth round) is aggressive and very advanced as a cornerback.

Undrafted free agent offensive rackle Ryan Pope out of San Diego State earned $145,000 to sign with the Lions so consider him like another pick in their plans to dig out of the NFC North cellar. 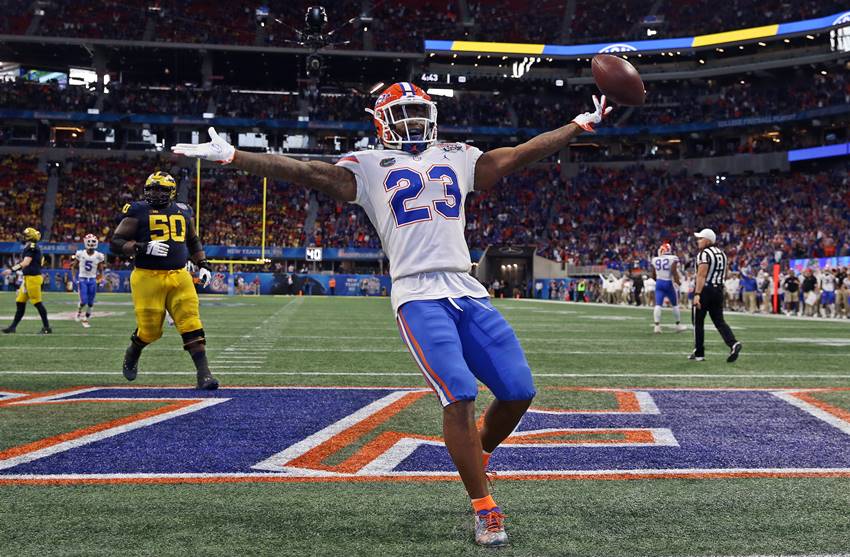 Football is in the air. Pro football, that is.