NEW ORLEANS – The College Football Playoff National Championship will be held in the Mercedes-Benz Superdome on Jan. 13, 2020.

That’s 272 days away for anyone who’s keeping count.

Wednesday was a day to celebrate the college football title game’s long-awaited return to the Crescent City and to spotlight the non-football activities that will precede the game and more importantly the ways in which the event will have a lasting impact on the New Orleans community.

The Warren Easton band serenaded a group of CFP and community officials on to the Eagles campus Wednesday morning to show off the CFP championship trophy and outline the various ways this event will impact New Orleans outside of the four hours during which the game will be played.

“New Orleans is a great part of our history,” said Bill Hancock, executive director of the CFP. “We’re coming back home to New Orleans.”

New Orleans last hosted a college football championship when the BCS title game was held in the Allstate Sugar Bowl after the 2011 season. The Crescent City has twice hosted a semifinal game during the first five years of the CFP.

“It’s a new day with the CFP,” Hancock said.

The initial CFP Championship was played after the 2014 season in Arlington, Texas, followed by games in Glendale, Ariz., Tampa, Atlanta and the Bay Area in California.

“New Orleans is ready to show them how it’s done,” said Monique Morial, Chair of the  local organizing committee and President of the Sugar Bowl Committee. “We know how to put on a party and we know how to have fun.”

The “cornerstone” of the events leading up to the game will be the “Championship Campus” on the Riverfront, which will be open free to the public.

“It’s a chance to soak up the enjoyment of college football,” Hancock said.

The Playoff Fan Central will be held at the Morial Convention Center beginning two days before the game.

Media Day will be held Jan. 11 at the Convocation Center on the campus of Xavier University.

“We used to do things behind closed doors,” Hancock said.

But now the public can attend the primary news conference of CFP week and listen on headphones that allow them to dial in whichever players and coaches from the participating teams that they wish to hear.

The AT&T Playoff Playlist Live” will be a series of free concerts held at Woldenberg Park. The lineup will be announced in November.

The day before the game will feature a 5K downtown followed by a “Taste of the Championship,” which will feature food from several of the city’s finest restaurants.

The CFP expects to have a lasting impact on the community through the College Football Playoff Foundation’s commitment to Orleans Parish teachers through the “Extra Yard for Teachers” program.

“Nothing is more important than K through 121 education in our country,” Hancock said.

Teachers, staff and students from Warren Easton returned to campus during Spring Break to take part in Wednesday’s news conference. The New Orleans teaching community was represented by 50 teachers from throughout the metro area. 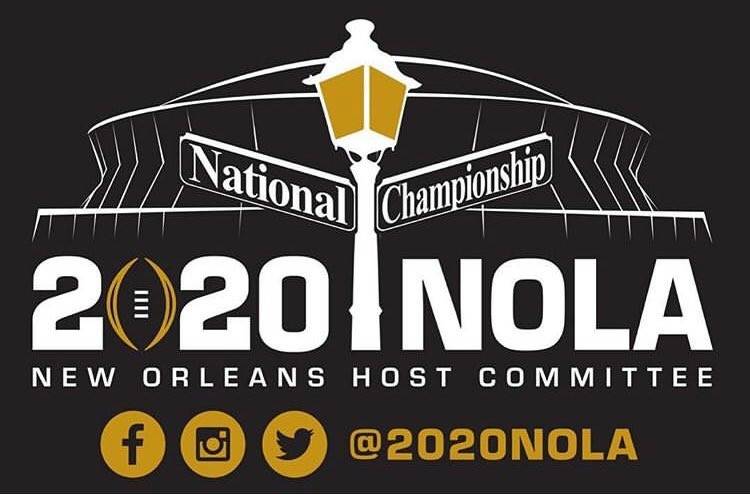 More than 100,000 New Orleans residents and visitors from across the country are expected to attend a full menu of events for fans during the weekend of the 2020 College Football Playoff (CFP) National Championship.