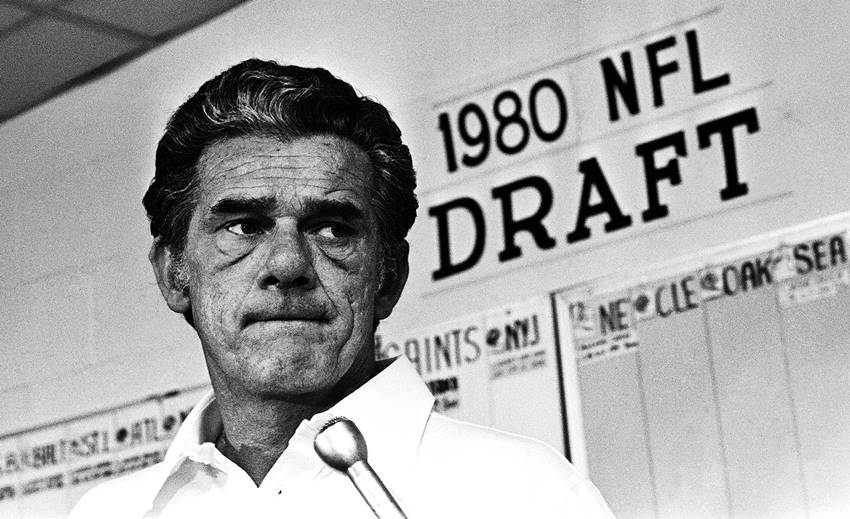 Dick Nolan was a solid football player in college at Maryland.

Nolan was chosen in the NFL Draft by the New York Giants in 1954.

He went on to play nine seasons in the league with the Giants, Chicago Cardinals and Dallas Cowboys.

In Nolan’s final season in Dallas, he was injured. Head coach Tom Landry thought so much of Nolan that he made Nolan his defensive coordinator halfway through the 1962 season, thus, making Nolan a player-coach.

Nolan retired as a player at the end of that season and remained defensive coordinator of the Cowboys through 1967 as Dallas twice played for the NFL championship, falling both times to Green Bay in epic battles.

Nolan then received his big shot, being hired as head coach of the San Francisco 49ers in 1968.

Nolan went on to serve eight seasons as head coach of the Niners, leading his team to three straight NFC West Division titles (1970-72). Twice, the 49ers lost in the NFC championship game (1970 and 1971).

After going 8-5-1 in 1972, the Niners experienced a downturn, posting three straight losing seasons. Nolan was dismissed following a 5-9 record in 1975. He finished with a record of 54-53-5 in San Francisco.

After a year out of the league, Nolan was hired by Hank Stram as his linebackers coach with the Saints in 1977.

The Saints posted a 7-9 record in 1978, their best record in franchise history.

New Orleans opened the season with a thrilling 31-24 win at home over Minnesota as the Saints picked off Fran Tarkenton four times, including three by Tommy Myers, who returned one 97 yards for a touchdown. Chuck Muncie rushed for two touchdowns and Tony Galbreath ran for another score.

The Saints were 5-4 after beating the Giants 28-17 at home on Oct. 29, the deepest into any of the 12 seasons in franchise history that New Orleans had a winning record.

Down the stretch, New Orleans suffered three brutal losses, a 20-14 loss at world champion Pittsburgh when the Saints had the lead late and had the better of it most of the afternoon at Three Rivers Stadium, a pair of 20-17 losses to Atlanta in excruciating fashion and a 17-12 loss to Houston.

The loss to the Steelers was hard to take.

The Saints amassed 425 yards of offense against the vaunted, Hall of Fame littered Steel Curtain defense. Archie Manning passed for 344 yards, including a touchdown pass to Rich Mauti.

Then, late in the game, former Louisiana Tech star Terry Bradshaw hit Rocky Bleier with a 24-yard touchdown pass to steal the win.

The first loss to Atlanta was in the Superdome as Steve Bartkowski hit Alfred Jenkins on a 57-yard, Hail Mary pass which became known as “Big Ben” to steal the win.

The Saints controlled the game, leading 17-7 with a minute left to play. How do you lose that one?

Haskel Stanback scored on a 1-yard run with 57 seconds left to cut the deficit to 17-13.

The Saints got the ball back, recovering the onside kick with a chance to run the clock out if they could make a first down. They could not.

On fourth-and-two near midfield, Nolan decided to go for it. Muncie was stuffed.

Atlanta took over and you know the rest of the story.

The second loss was even worse.

Safety Ralph McGill intercepted a Bartkowski pass in the end zone late in the game to seemingly seal the victory.

Somehow, Klemmer decided that Spencer committed pass interference, a completely bogus, phantom call. Falcons wide receiver Dennis Pearson, whom was the alleged victim of the call, later said as much, saying he felt no contact at all.

That gave the Falcons new life at the New Orleans 1-yard line.

Bartkowski took total advantage, hitting tight end Jim Mitchell on a 1-yard touchdown pass to steal a win which should not have been.

The Saints were close.

Manning was back healthy and it showed. He made the Pro Bowl.

Manning threw for 3,416 yards and 17 touchdowns, completing a career-best 61.8 percent of his throws. Manning added 202 yards and a score. He was voted first team All-Conference by UPI.

Galbreath and Muncie each scored seven touchdowns and Galbreath rushed for 635 yards and caught 74 passes for 582 yards. Henry Childs was outstanding with 53 catches for 869 yards and four touchdowns. Ike Harris and Tinker Owens each had 40 catches and rookie Wes Chandler had 35 receptions with two touchdowns and was excellent returning kickoffs and punts.

Myers had six interceptions while Ray Brown and Spencer each had four. Joe Federspiel, Elois Grooms and Derland Moore were good up front.

That gave Nolan and the Saints real hope for 1979.

Once again, another crushing loss to the Falcons helped prevent the Saints from a first-ever winning season.

On opening day, Atlanta beat New Orleans 40-34 in overtime when John Watson snapped the ball over the head of punter Russell Erxleben.

In his haste to do something with the ball, Erxleben picked up the ball, threw it up in the air and James Mayberry picked it off and scored the winning touchdown to end the game.

Then, the ability of this highly potent offense showed itself.

The Saints won seven of the next 10 games, including a satisfying 37-6 burning of Atlanta at Fulton County Stadium in the rain, finally extracting revenge for three bitter losses in a row against the most bitter rival of New Orleans.

The Saints were 7-6 with three games left, the best record in franchise history for 13 games.

That set the stage for a Monday Night Football showdown with the vaunted Oakland Raiders.

In front of a national audience, the Saints had their vast arsenal on full display.

After Oakland took an early 7-0 lead, Galbreath ran two yards for a score to tie the game 7-7 in the second quarter.

Then, Galbreath made one of the best catches in franchise history, reaching up and back to make a one-handed catch of a 19-yard touchdown pass from Manning to give the Saints a 14-7 lead.

The onslaught continued when Muncie ran one yard for a score and it was 28-7. The Raiders cut the deficit to 28-14 by halftime but the Saints were still in control.

That became an even better situation when New Orleans native and former Brother Martin and LSU star Ken Bordelon picked off future Saint Ken Stabler and returned it 19 yards for a touchdown to make it 35-14.

The Saints were well on their way to a potential division championship, a first winning season and first playoff appearance.

The offense stalled. The defense could not stall Stabler and the Raiders.

Oakland scored the final 28 points of the game, including 21 in the fourth quarter, to pull out a 42-35 victory.

The loss lingered as the Saints were mauled 35-0 by the Chargers at home the next week to kill any shot at a winning season and playoff appearance.

New Orleans did recover with a 29-13 win at Los Angeles over the Rams to close the season at 8-8, the first non-losing season in franchise history.

Manning passed for 3,169 yards and 15 touchdowns and ran for 186 yards and two scores. Manning again made the Pro Bowl and was named NFC Offensive Player of the Year.

Muncie had a breakout season, rushing for 1,198 yards and 11 touchdowns while catching 40 passes for 308 yards. Galbreath rushed for 708 yards and nine touchdowns and had 58 receptions for 484 yards and a score. Mike Strachan rushed for six touchdowns.

Chandler had a brilliant year, catching 65 passes for 1,069 yards and six touchdowns. Childs was outstanding with 51 catches for 846 yards and five touchdowns. Myers had seven interceptions, returning one for a touchdown.

Manning, Muncie, Chandler, Childs and Myers all made the Pro Bowl, the most ever, at that time, in team history. Galbreath could easily have made it as well.

The Saints were even closer.

Rather than continuing the progression under Nolan, Mecom decided to hire Steve Rosenbloom as general manager and he brought in Harold Guiver from the Rams, where Rosenbloom had worked, as an executive dealing with finances. Dick Steinberg arrived as vice president of player personnel and Harold Guiver, usurping Nolan’s authority. It did not go well.

Galbreath was unhappy with his contract. He would be traded to Minnesota following the season.

Muncie, Don Reese and many other players on the team had serious drug issues.

The season opened with a close, tough 26-23 loss at home to San Francisco and second year head coach Bill Walsh.

It was nothing but misery which followed.

The organization finally tired of Muncie’s antics, trading him in midseason to San Diego. The defense could not stop anyone.

The last straw was a 27-7 loss to the Los Angeles Rams on Monday Night Football on Nov. 24.

Nolan was fired by Mecom the next day, replaced by offensive line coach Dick Stanfel on an Interim basis.

Nolan finished 15-29 with the Saints.

He went to Houston to serve as defensive coordinator for one season before returning to Dallas to serve an assistant coach, once again, this time for nine seasons. Nolan then spent one year as an assistant with Denver and closed out his coaching career as a head coach of the Arena Football League San Antonio Force in 1992.

Rosenbloom later sued Mecom for allegedly breaching his contract by not consulting with him about important team decisions, including the hiring of Bum Phillips as head coach.

Nolan was a low key, no-nonsense, nice guy. My career in broadcasting began during Nolan’s regime with the Saints.

His legacy with the Saints would be continued when his son, Mike Nolan, would serve as linebacker coach under Sean Payton, from 2017-19.

We will next take a look at the short stint of Dick Stanfel as the Interim head coach of the Saints.