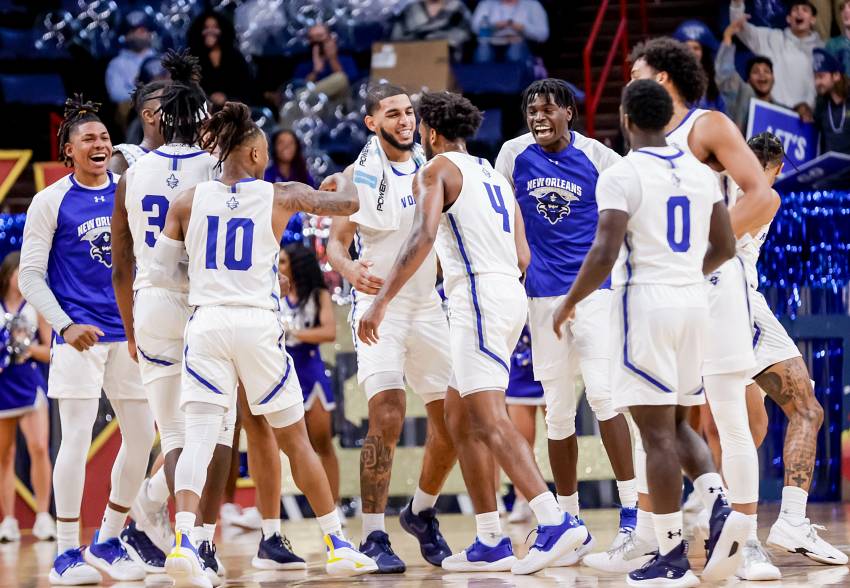 NEW ORLEANS – The New Orleans men’s basketball program picked up its first victory of the 2021-22 campaign as the Privateers cruised to a 79-41 victory inside the friendly confines of the UNO Lakefront Arena in a non-conference contest against Spring Hill on Saturday afternoon.

INSIDE THE BOX SCORE
– For the second straight game, graduate senior guard Derek St. Hilaire paced the Privateers with 17 points (on 6-of-11 shooting), to go with three assists and two rebounds.
– Believe it or not, De’Sean Allen-Eikens was the only other Privateer to cross the double-digit point plateau as he finished with 10 points, three boards, an assist and a steal.
– Jamond Vincent grabbed a team-high nine rebounds in just 16 minutes of play.
– Troy Green led the Privateers with four assists to go with five points, three boards and two steals.
– All 14 Privateers on the roster scored at least two points as every single UNO student-athlete knocked down at least one field goal. Even more outstanding, 13-out-of-14 student-athletes grabbed at least one board.
– New Orleans was a force in the paint as the Privateers outscored the Badgers by a 56-24 margin close to the basket. If you would have taken away everything scored outside of the paint for UNO, the Privateers still would have won the game by 15 points.
– Another area New Orleans dominated was in the play it got from its student-athletes off the bench. The Privateers second unit outscored the Badgers bench by a 39-2 margin.
– As a defensive unit, New Orleans forced 20 Spring Hill turnovers and held the Badgers to a 28.1 percent clip from the field.
– The following two student-athletes scored their first points as Privateers this afternoon; Norris Williams and Darrius Washington.

HOW IT HAPPENED
– The Privateers scored the first basket 41 seconds into the game, and would never look back as this contest featured 0 lead changes or times that the game was tied.
– New Orleans jumped out to a 45-15 lead after the first half of play. UNO shot 45.9 percent from the field in the opening half, while holding Spring Hill to just a 16.1 percent clip. The Badgers also went 0-for-13 from beyond the arc in the opening frame.
– Spring Hill came out hot in the second, but after weathering the storm, the Privateers were able to cruise to the 79-41 victory.

NEXT UP
The Privateers will hit the road for a showdown with Big Ten power Northwestern on Tuesday, Nov. 16 at the Welsh-Ryan Arena. Tipoff for the non-conference clash is set for 7 PM CT and the game will be featured in front of a national audience on BTN+. Jude Young will have the radio call from Evanston, Ill. on NASH ICON 106.1 FM.