New Orleans’ Kerry Kittles was a shooting star at Villanova, in NBA 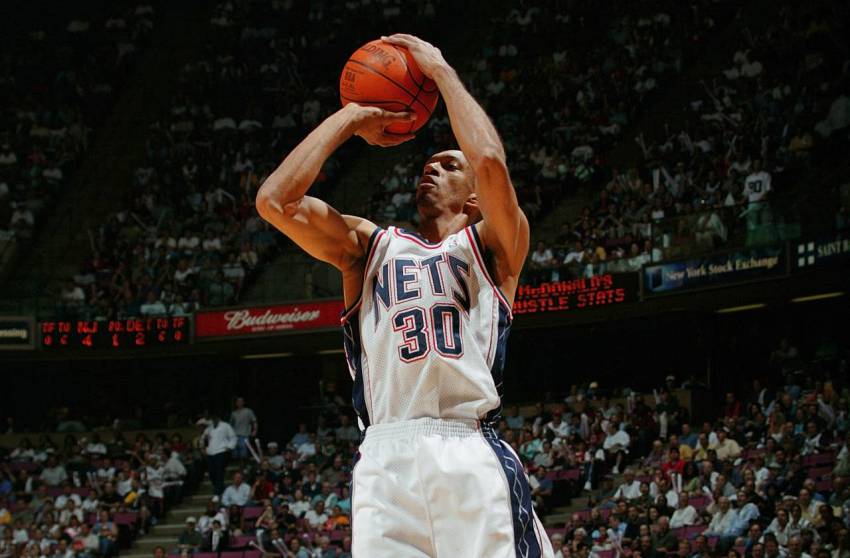 ​For new Villanova head basketball coach Steve Lappas, it was the first day of practice in October 1992.  He looked at his assistants and proclaimed, “gentlemen, we have a problem.”

The assistants asked for clarification and Lappas accommodated by answering, “our best player is that freshman over there.”

​That “freshman over there” was Kerry Kittles, going to college in Philadelphia, after being recruited out of New Orleans.   He was unknown nationally, not on anyone’s radar in the basketball crazy Big East Conference, but was an All-State performer and the Class 5A Most Valuable Player in Louisiana after leading St. Augustine High School to the 5A State championship.
​
That freshman became one of the all-time great players in Villanova and Big East Conference history. Add a successful eight-year NBA career in the mix and it has led to induction into the Louisiana Sports Hall of Fame in Natchitoches on June 26, highlighting festivities starting June 24 in Louisiana’s oldest city.

​Kerry Kittles’ love for the game of basketball came during his elementary and middle school days participating in New Orleans Recreation Department leagues.  At the time he was also paying the trombone.  The gangly teen could have easily made his mark in high school as a member of the famed St. Aug marching band, “The Marching 100.”

He made steady progress on the junior varsity basketball squad as a ninth grader.  Quickly, he was one of the school’s better players as a sophomore and junior.

​In that junior year, he missed much of the regular season with a back injury but returned in time for the playoffs.  Kittles was not a starter but saw considerable action as the Purple Knights reached the 1991 4A state final, falling 64-63 to Cohen High of New Orleans led by McDonald’s All-American and eventual Georgetown signee Duane Spencer.

Bobby Knight, legendary basketball coach at Indiana University, used to say, “all players can hear you, the trick is to get them to listen to you.”  Kittles was indeed a listener, according to his coach at St. Augustine High.
​
Bernard Griffith directed the Purple Knights to three (1992, 1995 and 1999) of the school’s seven state basketball titles.  He calls Kittles an “old soul” who looked directly in your mouth when talking to him.

​“Kerry always looked like he was taking in every word you’d say to him.  He did more than listen, he would also go to work.”

“If you showed him how to execute the cross-over dribble, he’d go home and work on it and return the next day as if he’d been doing it for years.”

​When the 1991-92 season arrived, Kerry Kittles was more than a starter, he was undoubtably one of the best players in the state.   Averaging 22.5 points a contest, he led St. Aug to a 32-3 record and the 5A crown with a dominating 67-50 win over John Ehret.

​Kittles was a first team all-metro and all-state selection. He was more proud that St. Aug was 66-5 over his last two seasons of prep basketball.

​Kittles made his collegiate decision early during his senior year of high school, choosing coach Rollie Massimino and the Villanova Wildcats of the Big East.  Massimino surprisingly left for Nevada-Las Vegas and was replaced by Lappas, who had successfully rebuilt the program at Manhattan.
​
Understandably, Lappas knew nothing about Kittles.  He never saw him play but “word of mouth” told him he should make a trip to the Crescent City to convince this prized recruit that Philadelphia was the place where he should play college basketball.

​It turned out to be the most important recruiting trip of Lappas’ tenure at Villanova.
​
“In the end I picked Villanova because it fit all of my criteria,” said Kittles.  “It was a small Catholic institution, its games were on television, I could play right away and the biggest factor was its graduation rate.” 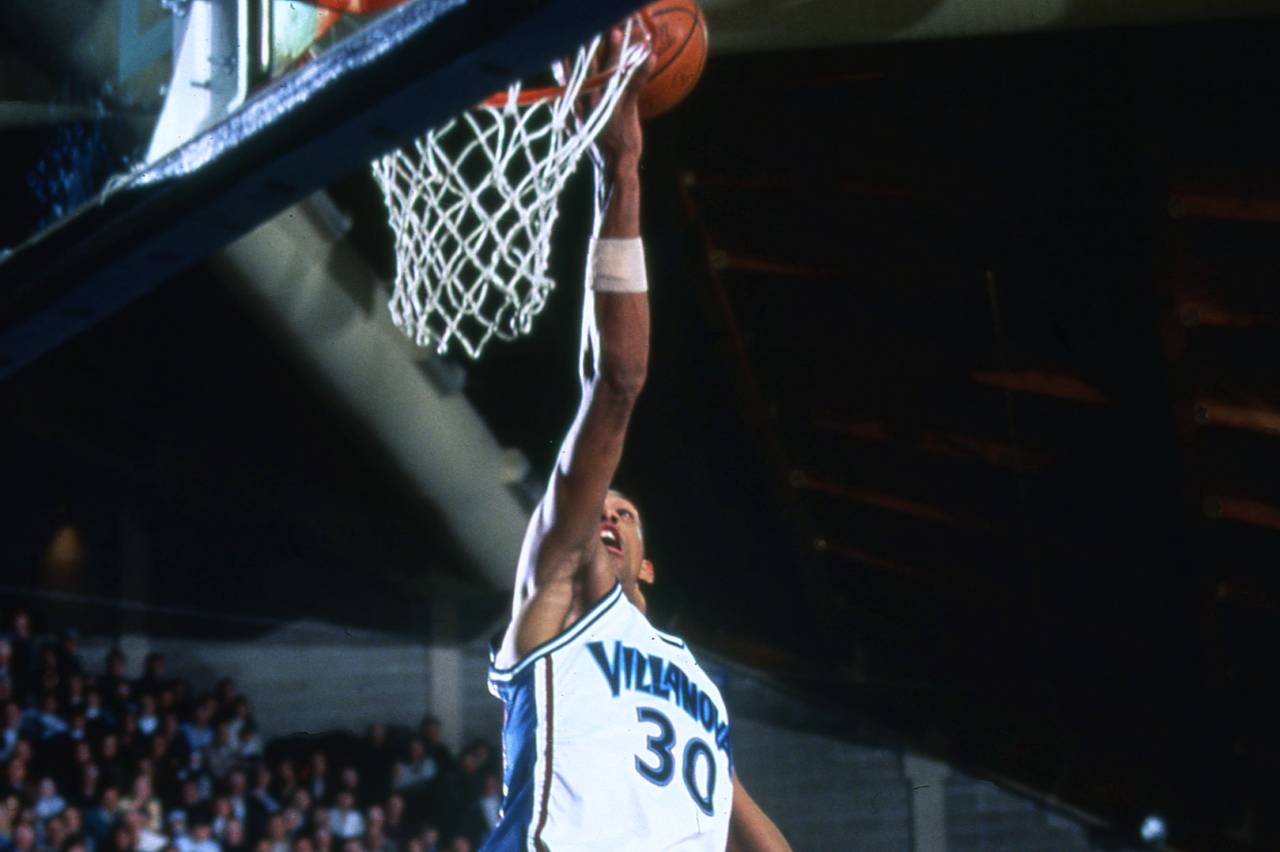 ​Kittles made good on those assets. He earned an MBA from Villanova and turned out to be one of the greatest players in school history, a school with an illustrious basketball resume’.

“He was the smartest player I ever coached,” said Lappas.  “He understood the game and unlike a lot of really great, talented players he knew how to play without the ball.   Most guys, especially guards, they have to have the ball in their hands.  Kerry was as good off the ball as he was with the ball.”

​Kittles averaged 11 points a contest as a freshman during an 8-19 losing season for the Wildcats.  They rebounded in a big way the next season with a 20-12 record and the school’s first ever National Invitational Tournament Championship thanks to an 80-73 win at Madison Square Garden over Vanderbilt of the Southeastern Conference.

​As a junior, ‘Nova won the 1995 Big East Tournament and he was voted tournament Most Valuable Player.  With a 25-8 record, his seasonal averages of 21.4 points, 6.1 rebounds and 3.5 assists were good enough to earn him Big East Player of the Year honors, beating out the likes of future NBA superstars Ray Allen and Allen Iverson.

“Once I saw what I could do in my sophomore year I just got hungrier for more and more success and I worked harder and harder in the off-season between my sophomore and junior seasons,” said Kittles. “No doubt it was some good times.”

A highly-decorated junior season like Kittles’ 1995 dream season is the perfect time to “take the money and run.”  True to his penchant for being different from the crowd, Kittles decided to return to Villanova for his senior season, despite knowing that he would probably be an NBA lottery selection.

“It was simple.  The NBA wasn’t going anywhere. I just felt like the money and that experience would be there for me and there was no need to rush.  I knew I could play against those guys. I was just enjoying the college experience. I wanted it to continue and have fun and all of the NBA lifestyle would be there the following year.”

His senior season saw the Wildcats ranked as high as second in the nation.   Kittles averaged 20 points a game, was an All-Big East selection and a consensus first team 1995-96 All-American.

The kid from New Orleans had made his mark in the college basketball mecca of Philadelphia.  However, the institution made a lasting impression on one of its most decorated student-athletes.

While competing and excelling at the highest level of collegiate basketball competition, Kerry Kittles says he had the ultimate college experience: a time when he was on his own, making big decisions, discovering who he was.  He’s thankful to Villanova University for four of the most important years of his life.

“There were lots of great memories on the court at home or on the road but looking back the biggest thing for me in college were the relationships and the connection to the university.  I’m still connected to the school as a member of the board of trustees.   That means more to me than the basketball honors, records and awards.  That Villanova community is a real strong, tight-knit community.”

In the summer of 1996 it was on to the National Basketball Association as the eighth-overall selection in the draft by the New Jersey Nets.

He had immediate impact. Kittles made NBA All-Rookie Second Team and set franchise and NBA rookie marks for three-point field goals made, 158.  He played in all 82 games, starting 57 and averaged 16.4 points, 4 rebounds and 3 assists.

The highlights of his professional career were two consecutive trips to the NBA Finals.  Although unsuccessful as the Nets fell to the Lakers in 2002 and the San Antonio Spurs in 2003, he started every playoff game both seasons, teaming with backcourt mate Jason Kidd.

“Reaching the Finals was cool because of the number of media around all the time,” he reflected. “But just playing in the NBA, well, much of the time I just had to pinch myself realizing I was playing against my idols like Clyde Drexler and Michael Jordan.”

While having his playing days shortened was frustrating, this was not an athlete who would have difficulty adjusting to life without the game.

Kerry and wife Adria are coaching a quintet of their own, four daughters and one son, ages 16 to 7. They have spent the fall home-schooling their children in Franklin Lakes, N.J.

Teaching is joyful for Kittles, who has served on the board of his children’s school. He’s scratched the coaching itch, too, spending two seasons, 2016-18 as an assistant coach at Princeton University.

​“When you’ve played the game at a high level you know it inside out. It was fun for me just mentoring young men and seeing them grow,” he said.

​Entering the sports hall of fame of his home state means life has come full circle.

​“I think a lot about my coaches at St. Aug, Bernard Griffith, Cliff Barthe’ and my junior varsity coach, John Charles.  They took a young kid and morphed him into a really confident, and almost bullet-proof athlete and young man on and off the court.  The tough love and discipline prepared me for life.”

​Anyone who saw Kerry Kittles play basketball knows his game was beautiful — physically and mentally. Now, his mind is focused on fatherhood.

​“I love basketball, it’s in my blood. However, there’s other stuff running through my veins.  I’ve always wanted to explore more.  I love to travel and being exposed to cultures all over the world.  I want that for my children because being a good father and husband is so very important.  You’ve got to make sure that balance is right.”